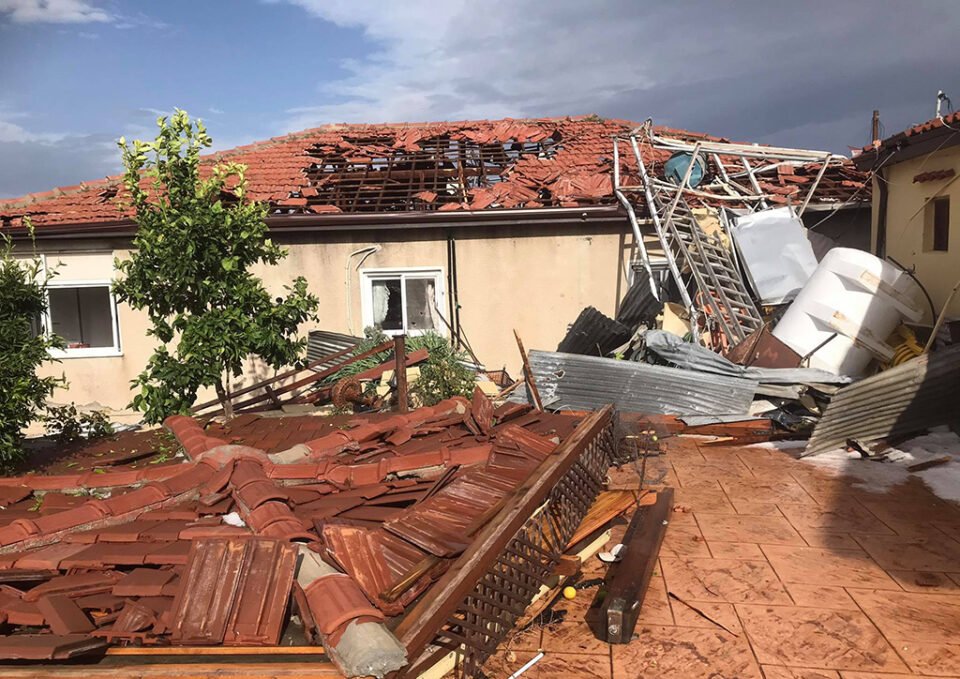 By Evie Andreou and Annette Chrysostomou

Dozens of houses in the Nicosia district were rendered uninhabitable on Monday when a whirlwind and heavy storms battered the island as the met office warned of more thunderstorms today.

Though the storms affected much of the island, Nikitari-Astromeritis area bore the brunt of the extreme weather with a whirlwind compounding the problems created by the rain and hail.

Interior Minister Nicos Nouris who sped to the scene said the government will promptly give €2,000 to meet the urgent needs of families in the two communities whose houses were seriously damaged.

Around 10 houses in Astromeritis and 15 in Nikitari were deemed uninhabitable after a whirlwind struck the area at around 7.30am, authorities said.

The met office, which had issued a yellow alert up till 4.00 pm on Monday, upgraded its warning to an orange alert that will be in force until 8.00 pm on Tuesday.

“Isolated heavy thunderstorms are expected to affect the area. Shower rates may exceed 55mm per hour with high risk of hail,” it said.

The minister visited the area on Monday morning, to see first hand the damage and what needs to be done. Serious damage was also reported in farms.

“Fortunately, there has been no loss of human life. Everything else will be restored,” Nouris said during his visit in Nikitari.

He announced that the government would give €2,000 in emergency aid to everyone whose house has been severely damaged by the whirlwind, while arrangements were made for people to stay in hotels if they have nowhere else to go.

According to Nouris, two families were taken to a hotel in Nicosia and more could follow if necessary.

“We will record the damage and see how we can help these people who have suffered damage,” Nouris said.

The minister said he contacted the electricity authority whose crews were working to restore the damage to its infrastructure which caused a power outage in a large part of that area.

He added that effort was underway for electricity connection to be restored in all affected area by the evening.

Nouris said damage in farms was to be recorded as well, and the cabinet would be briefed about all problems on Wednesday.

And the agriculture ministry issued a written announcement, saying that producers and livestock breeders affected by the storm will be compensated.

According to Astromeritis community leader, Aris Constantinou, around 10 houses have roof damage.

Fire service spokesman Andreas Kettis told the Cyprus News Agency that at least 15 houses in nearby Nikitari were deemed uninhabitable after their roofs were destroyed. Other houses were damaged less. The whirlwind even carried away a small truck, he said.

The fire service, police, crews of the civil defence, the electricity authority, the district administration, the forestry department and the fauna service went to the area, each dealing with issues concerning their competencies, Kettis said.

In Limassol, sea water entered restaurants in the Lady’s Mile area during a storm in the morning.

“We had a big storm here today, which destroyed the beach and the embankments, and the sea entered our restaurants,” Filios Demetriades, who owns one of the businesses there, told CNA. He added that it was only “a matter of time” before the pergolas erected there fall. Demetriades said he could not recall a storm big enough in the past to have created such problems.

He raised the issue of beach corrosion and said that authorities need to take matters more seriously in order to save the beach.
Hail was recorded in several areas of the island, with people on social media posting photos of large hail stones. Photos of massive hail stones in Karavas in Kyrenia, were posted on social media.

In the north, according to Turkish Cypriot media, many streets flooded in Kyrenia and Morphou. In Morphou houses and other building also flooded.

Power outages were also recorded in in several communities in the Paphos district due to the adverse weather conditions but, according to the electricity authority spokeswoman Christina Papadopoulou said, it has been restored.

She said there was a power outage in the communities of Emba, Kallepia, Mesogi, Nata, Peyia, Tremithousa, Tsada and part of Choletria.

Early on Monday strong storms affected the Paphos district and the Troodos mountains on Monday morning before they moved on to the Nicosia district, where hail and rain were accompanied by strong winds.

Troodos was coated in white, but not by snow but as hail fell across the area.

“I have avoided the storm in Mammari because it was potentially dangerous and moved further back. Anthoupoli, from where I see west of Nicosia is chaos! The storm is moving towards the capital city!” longstanding member George Charalambous posted at 9am.

How to stay safe online when you’re Christmas shopping

Webinar on digital transformation of the healthcare industry by UNic