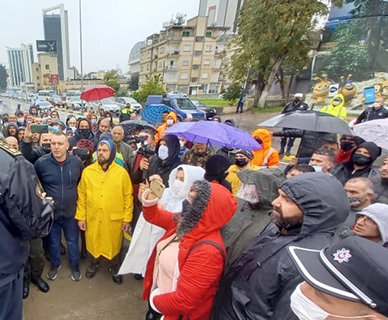 Turkish Cypriots working in the government-controlled areas staged a protest at the northern end of the Ayios Dhometios crossing on Tuesday morning against new Covid measures imposed by the Turkish Cypriot authorities.

According to reports from the north, a group of workers gathered at the crossing and then marched to the offices of the ‘prime minister’ and the ‘health minister’ protesting against the decision. They also blocked a main road, chanting “We are workers, we are right, we will win”.

They asked for explanations as to why the latest restrictions did not apply to certain categories of people such as students but did apply to workers.

According to media reports from the north, the police director for the northern part of Nicosia went to talk to the protesters, appealing to them not to cause chaos.  “You have made your voice heard, complete your action democratically, this is not only our health problem, but the world’s.”

On Monday, the Turkish Cypriot authorities announced stricter measures to prevent the spread of coronavirus, including temporarily banning people from crossing between the two sides for work.

It was decided to raise the quarantine period for those entering the north from seven to 10 days. People who want to enter the north must now present a negative PCR test certificate not older than three days but they must also quarantine for 10 days.

A stop has also been put to the exception from quarantine of people arriving to the north for three days or less, with charter flights, private aircraft, scheduled flights and ships.

As regards people who live in the north and work in the south, and those who do trade under the Green Line Regulation, they will be banned from crossing between the two sides of the island from December 16 until December 25, 2020 (including both dates). This also concerns taxi drivers transporting passengers from the north to the south.

Students and those needing to cross south for medical treatment are exempt from the ban.

According to Cyprus News Agency, the new measures also do not affect residents from the Tylliria region who use Limnitis checkpoint for access to Nicosia.

According to the new measures, taverns, bars, clubs and similar entertainment venues will close between December 15 and 25 while cafes and restaurants can remain open provided that they comply with all protocols, including not more than six people in each table.

The measures are to be reviewed on December 24.

The new measures follow a rise in local cases in the north in the past few days. During the first 13 days of December, 162 cases were recorded, including 42 local ones. On Sunday, eight of the 13 cases recorded were local ones.

Arrest after man suspected of grooming a minor online

Why we need some good baking at home this Christmas