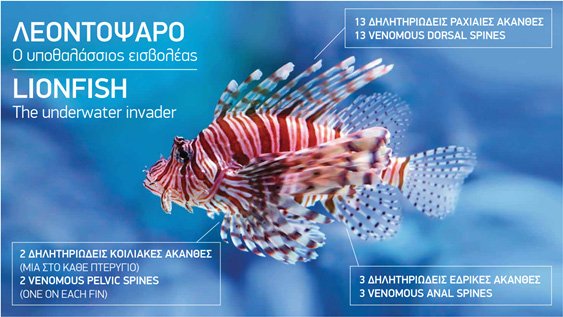 A new app allowing users to monitor the presence of lionfish, an invasive species of fish that has recently proliferated Cyprus’ waters, was launched on Monday the University of Cyprus announced.

The app, called IUCN MedMIS, is part of a bigger project called “RELIONMED-Life” that was launched in 2017 and is aimed at monitoring and controlling the population of lionfish off Cyprus, with volunteer divers intervening to remove them when necessary.

“The increasing numbers of lionfish around Cyprus created the need to create a platform that allows scientists to monitor their abundance and distribution in the area so that we can control their populations and their negative effects,” the statement said.

According to the researchers working on the project, the lionfish is reproducing rapidly and in the Mediterranean no predator has yet been identified. It consumes mainly native fish and invertebrates found in the marine area of Cyprus, including species of commercial value, having the potential result of disruption of local biodiversity and fishing stocks.

Our View:  Little hope that bad loans list will be published

The EU wants the Cyprus problem solved as soon as possible