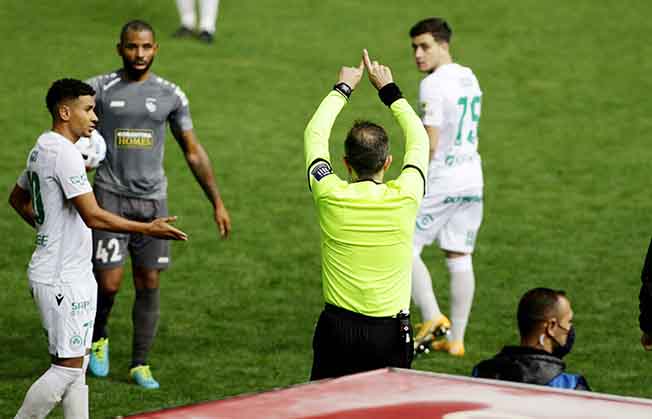 Pafos FC have slammed the officiating in Monday’s 2-1 defeat against Omonia, as the first round of the Cyprus First Division with VAR used in every game has not been without controversy.

The two primary points of contention involve the build-up to Omonia’s first goal and an incident in the dying moments of the match in which the referee ended up rescinding a foul and yellow card against Omonia.

From the footage available to us, both incidents seem to favour Pafos’ outlook, where the first goal should not have stood since Omonia player Ernest Asante appeared to have handled the ball during the build-up, and where Pafos could have been awarded a penalty in injury time as Lecjaks appeared to have fouled English forward Rushian Hepburn-Murphy inside the penalty area.

Both instances were checked by VAR, although the match official was only advised to check the monitor available to the referee only in the second incident.

After looking at the footage, the referee reversed his original judgement, in which he awarded Pafos a foul just outside the penalty box and penalised Lecjaks with a yellow card, rescinding both the foul and the yellow card.

Pafos FC have now released a statement on what took place in the game, saying that the club has noticed ‘no improvement’ in the level of officiating in Cyprus.

Here is the full statement:

“For the past three years since the Club has started cooperation with Total Sports Investments, Pafos FC has never commented on the work of the referees and has never raised questions on the fairness of the decisions made by them. The Club has always firmly believed and is still certain that the outcome of matches fully depends on the performance of the players and the team as a whole on the field.

Unfortunately, current circumstances are forcing us to make this statement. Please note, that it is not to judge anyone, however we want to know public opinion. The aim of the statement is to let the fans and authorised personnel analyse the situation and make a fair conclusion. Regrettably, while the football develops overall, the Club sees no improvement around the practices adopted in refereeing.

The world’s precedents provide numerous means to fight bias, corruption and bad decision-making quite quickly, however it requires political intervention.

As an example, in Russia a number of referees have been subject to a lie detector check after doubtful decisions and were suspended indefinitely based on its results.

In other countries the exchange programs are practiced, when referees are sent to another country for a set period of time to raise the standard of refereeing, obtain international experience and ensure compliance with the fairness principles. Nonetheless, at the moment we are facing a situation when the owners see their investments of million of euros being in the hands of unregulated and non-transparent procedures, which are not a subject to community review.

Over the last years Cypriot football has made huge progress. It accounts for approximately 6-7% of the country’s GDP with up to 30,000 people involved in the business.

Cyprus is among the world leaders regarding the number of fans per capita, and the same applies to the cost of TV rights. But those achievements of an industry with vast resources are overshadowed by people who do not have proper qualification or have other interests in heart.

Pafos FC has never set a goal to put a stain on anyone’s reputation, but we believe a thorough examination by police structures, legal structures, community and federation of all levels is required in this instance.

We believe that an open analysis of refereeing practices can help football develop. We stand for progress and no forces will stop Pafos from moving towards it. However, we must remember that if we want to implement new technologies and methodologies, we must ensure they will be in the hands of people who have the appropriate principles of fair play and are driven by a common goal.

We have received support by presidents of some clubs and members of the federations, who share our opinion: if this is not a reason to step up, then what is?”