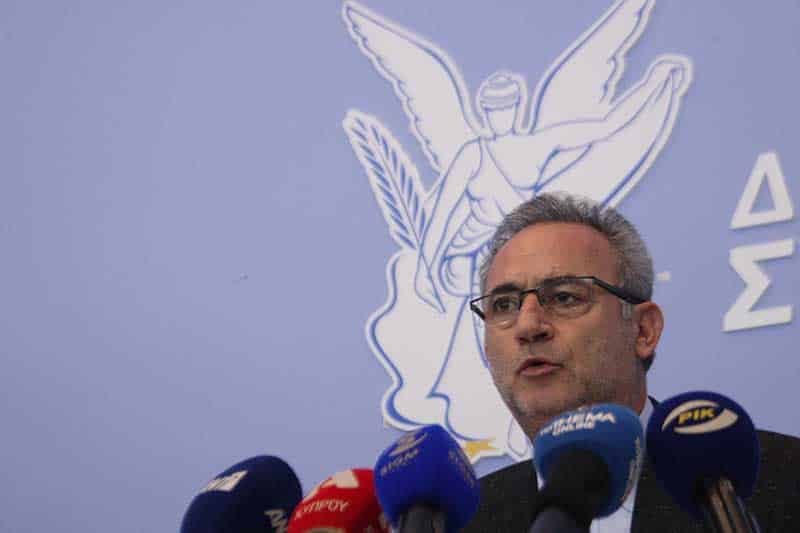 Ruling Disy leader Averof Neophytou will meet this afternoon with party leaders to discuss the 2021 budget as the debate entered Day 2 at the House but with no guarantee it will pass the plenum on Thursday.

Neophytou said on Tuesday he would continue to meet “until the last minute” with the parties that have not already decided, in order to have the budget passed. “We have to find a solution,” he said.

Unity was the theme of Neophytou’s budget speech on Tuesday, as he focused on how citizens perceived the situation created by the budget dispute, proposing an end of the deadlock through a collective effort and contribution by all the parties. He said the government and opposition gave the impression that they were completely out of touch with reality, failing to grasp the anxiety of citizens and mountain of problems that worried them.

Using strong language, not exempting anyone from his criticism, Neophytou said citizens “can no longer put up with our merciless impetuousness,” and added: “Citizens feel the highest degree of insecurity of the last few years and want to see hope. This is the reason for their rage and reactions. And we, their leaders are cultivating the rage of citizens with our unhelpful pursuits.”

What people wanted was to see the legislature dealing with developments but also risks, responsibly and collectively. “We should put aside our differences, real or imaginary, lock ourselves in a room for as long as it takes to offer solutions to the problems facing by people, until we find a way to resolve the budget dispute, for health, the economy, education and the occupation of the country,” said Neophytou.

In order to achieve his objective for collective action, he said that Disy would stop issuing announcements responding to attacks by other parties so as to put an end to the “war climate” created. Even if the budget was defeated on Thursday, on Friday he would begin consultations with Akel and Diko, as well as the other parties in order to find a way of ending the deadlock.

A meeting has already been scheduled with Akel leader Andros Kyprianou for Friday morning. The Akel leader said in a brief statement on Wednesday that was willing to hear what Neophytou had to say.

The debate in the House plenary got underway on Tuesday, but uncertainty over whether the bill will pass still looms large. The three-day debate process culminates on Thursday with the vote on the budget bill.

Passage of the government’s balance sheet very much hangs in the balance, with junior opposition party Diko not budging on their decision to veto.

As with any other bill, the budget legislation requires more than 50 per cent of those voting back it.

Diko have said they will vote down the budget unless the government grants the auditor-general access to files relating to the citizenship-by-investment scheme.

This was repeated early Wednesday by party leader Nicolas Papadopoulos who said in a statement: “The Disy government will be solely responsible for the vote against the budget. Diko expresses the demand of society for transparency.”

He said Diko was only asking for the obvious, that the government hand over the naturalisation files to the audit office. The party, he added had accepted a compromise proposal put forward by the former attorney-general to resolve the standoff.

“The government has yet to accept this proposal, in order to overcome this crisis. If they do not, the Disy government will be solely responsible for the vote against the state budget. It is their decision, their responsibility,” said Papadopoulos.
For their part, main opposition Akel traditionally vote against the budget as a thumbs-down to government policy.

As it stands, the parties likely voting in favour of the budget bill are ruling Disy (18 seats), Solidarity (two seats) and the Democratic Cooperation (three seats).

On Tuesday evening Elam (two seats) said they will vote in favour for major parts of the budget.

The Greens, however, could swing either way. The party is expected to determine its final stance on Wednesday.

Up for grabs are four more votes, from socialists Edek (three seats) and the Citizens Alliance (one seat). With these, the government could muster 29 votes, more than enough to pass the budget bill.

Compounding the suspense, Edek leader Marinos Sizopoulos said on Tuesday that the party’s three MPs will vote by conscience depending on “developments” over the next few days – a sign of horse-trading.

Diko’s Papadopoulos, as well as Democratic Cooperation MP Marinos Mousiouttas are self-isolating (contacts of coronavirus cases) and will miss the vote on Thursday. That in itself does not alter the balance.

The impasse might be broken should Diko reverse course and either vote for the budget or at least abstain.

During a meeting with party leaders earlier in the day, House president Adamos Adamou reportedly said he’d ask the attorney-general to reconsider a legal opinion concerning the auditor-general’s access to files relating to the citizenship-by-investment scheme.

Earlier, the attorney-general had furnished an opinion authorising the interior ministry to deny the Audit Office access to these files temporarily – so as not to clash with the work of a committee of inquiry looking into the same passports issue.

Adamou’s effort is to now convince the attorney-general to reconsider his legal opinion, and to instruct the interior ministry to provide the Audit Office with at least some limited information on the passports scheme.

If the effort succeeds, that might be enough to nudge Diko into voting for the budget.

Speaking to media on Tuesday, Disy MP Nicos Tornaritis accused Diko of engaging in blackmail and of “weaponising” the auditor-general for their own political agenda.

Should the budget fail to pass, the state can continue to be financed under a provision in the constitution that allows such payments. These cannot exceed the equivalent for each month of the previous year – although this arrangement can run only for two months, until the end of February. After that, effectively all payments cease.

If the budget is defeated, the government can still bring an amended bill to parliament up until February 28.