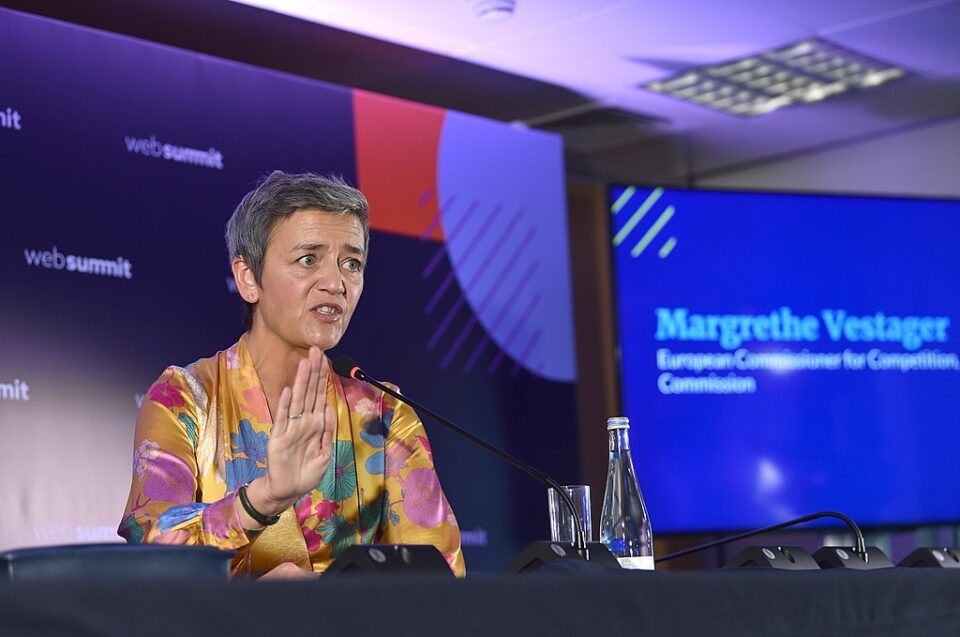 7 November 2018; Margrethe Vestager, European Commission, during a press conference during day two of Web Summit 2018 at the Altice Arena in Lisbon, Portugal. Photo by Diarmuid Greene/Web Summit via Sportsfile

The European Commission announced draft rules on Tuesday to rein in tech giants such as Alphabet’s Google, Facebook, Apple and Amazon, the most significant among a raft of measures taken by regulators worldwide.

Here is what European Union regulators hope to achieve, and the factors that will affect the final legislation expected to be adopted in the coming months, or possibly longer.

There are two sets of rules, the Digital Markets Act (DMA) and the Digital Services Act (DSA), with the latter in effect replacing the 20-year-old e-Commerce Directive.

The DMA targets online gatekeepers – companies that control data and access to their platforms – which thousands of businesses and millions of Europeans rely on for their work or social interactions.

Gatekeepers are defined as companies with more than €6.5 billion in annual European turnover in the last three years or €65 billion ($79 billion) in market value in the last financial year, and provide a core platform service in at least three EU countries.

Other criteria include having more than 45 million monthly users in Europe and more than 10,000 business users. Such companies could be online search engines, social networking services, cloud computing services and advertising services.

They face a list of dos – such as sharing certain kinds of data with rivals and regulators – and don’ts – among them a halt to favouring their own services on their platforms or harvesting data from their platforms to compete with their business users.

They will also be required to inform regulators of planned takeovers, a move aimed at preventing so-called killer acquisitions, or buying smaller rivals to kill them off.

Rule breakers face fines as high as 10 per cent of their annual global turnover, while repeat offenders can be broken up as a last resort.

The tech giants are required to do more to tackle illegal content such as hate speech and child sexual abuse material, misuse of their platforms that impinges on fundamental rights, and intentional manipulation of platforms, such as using bots to influence elections and public health.

The companies will be required to publish details of their online advertisers and show the parameters used by their algorithms to suggest and rank information. Independent auditors will monitor compliance, while EU countries will enforce the rules.

EU antitrust chief Margrethe Vestager has grown increasingly frustrated over the slow pace of investigations into the sector, due in part to legal requirements for defendants to present their case. Ten years on, three antitrust cases and more than 8 billion euros ($9.7 billion) in fines against Google, Vestager is still dogged by complaints from hundreds of Google critics that she has failed to stop anti-competitive behaviour.

For EU Internal Market Commissioner Thierry Breton, the best solution is rules to show the tech giants that they are not too big to be tamed.

The Commission will have to thrash out the final legislation together with the 27 countries in the bloc and the European Parliament, a process that could take months or even a year or more.

France and the Netherlands in September issued a joint paper urging the EU executive to take a tough line against tech giants, suggesting a number of measures identical to the ones proposed on Tuesday.

For the Dutch, the call marks a departure from their traditional liberal line.

Germany is also a fan of stronger measures against tech giants, while its antitrust agency has already taken action against Facebook and Amazon.

The Czech government, on the other hand, has cautioned against over-regulation. Ireland, home to the European headquarters of Google, Facebook and Twitter, is likely to fight for a moderate regulatory approach.

European Parliament lawmakers are expected to back the Commission’s approach.

The tech giants, which have called for proportionate and balanced rules that will not slow down innovation, are expected to redouble their efforts to water down the draft rules.

Recent EU legislation, such as the platform-to-business and copyright rules, were both more lenient than they had originally feared, due in part to their fierce lobbying with EU countries and EU lawmakers.

Don’t expect a group approach, though. With companies moving into their rivals’ territory, the tech giants are sniping at each other as well.

Facebook for example wants the EU to crack down on Apple for controlling an entire ecosystem from device to app store and apps and allegedly using this power to harm developers, consumers and large platforms. Apple rejects such accusations.

Last week, the U.S. Federal Trade Commission (FTC) and a big coalition of states sued Facebook, saying that it broke antitrust law. Amazon is also in the FTC’s crosshairs.

That followed a U.S. Department of Justice (DoJ) lawsuit in October that accused Google of illegally using its market muscle to hobble rivals, a move which could lead to the break-up of the company. Apple is also the subject of a DoJ investigation.

The Australian Competition and Consumer Commission (ACCC) has similarly called for sweeping changes to rein in how Google and Facebook use local content and consumer data.

India’s antitrust body CCI is investigating allegations that Google abuses its market position to promote its payments app, in the smart TV market and via its mobile Android operating system.

CCI is also probing Amazon and rival Flipkart, owned by Walmart, over alleged violations of competition law and certain discounting practices, which Amazon is challenging.

In addition, Britain has proposed new rules to crack down on tech companies.