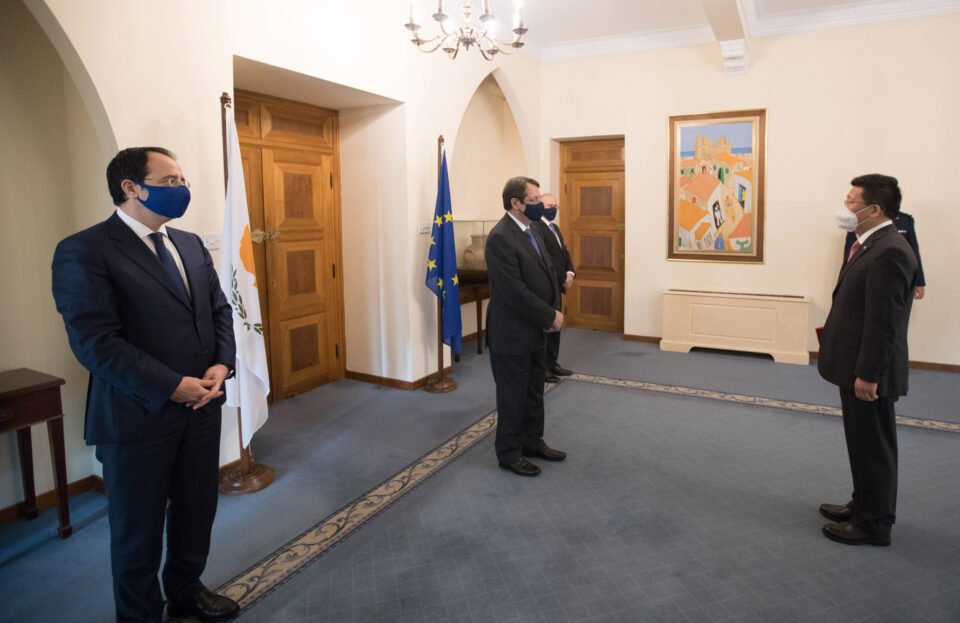 President Nicos Anastasiades on Thursday urged China, Ukraine and Egypt to exert pressure on Turkey to alter its intransigent stance on Cyprus and in the region as he received the credentials of the three countries’ new ambassadors to the island.

“Our vision and top priority remains none other than to reunify our island on the agreed basis of a bizonal and bicommunal federation as provided by UN Security Council resolutions, in order to establish a truly independent and sovereign state, free from foreign dependencies, guarantees, the right of military intervention or the presence of foreign troops,” the president said in his address at the separate ceremonies.

Turkey needed to be pressured “to alter its intransigent stance, reverse its unilateral and provocative actions and work for the easing of tensions in a consistent and sustained manner so as to establish a climate that is conducive to facilitating the resumption of the [Cyprus] process. Only then we will have realistic prospects for success,” he added.

China`s new Ambassador to Cyprus, Liu Yantao said in his address that Beijing opposed any unilateral provocations and actions that undermine the peace and stability of Cyprus and the region and as a permanent member of the UN Security Council, it would continue to play a constructive and coordinating role in facilitating the settlement of the Cyprus problem, Unficyp’s  mandate renewal, and the implementation of relevant UN resolutions, to uphold fairness and justice for Cypriots.

Ambassador Liu said that in recent years, China-Cyprus relations had made significant headway, with deepening political mutual trust and fruitful cooperation in various fields such as economy and trade, infrastructure, energy, communications, culture, education and tourism, as well as close coordination and collaboration in international affairs.

“China closely follows the developments of the political process of Cyprus. We share the same position with Cyprus in safeguarding national sovereignty and territorial integrity. China unswervingly supports a comprehensive, fair and lasting settlement of the Cyprus problem in accordance with relevant UN Resolutions, and all efforts made by Cyprus in safeguarding its sovereignty and territorial integrity for the peaceful reunification of the country,” Liu added.

Hamza responded expressing the hope to further solidify relations, while striving to open up new avenues of cooperation.

“Both our countries share common positions on these challenges and threats that violate international law, prolong regional conflicts and sponsor terrorism. Egypt will continue to coordinate, consult and exchange valuable information with Cyprus and our trusted partners in that connection,” he said.

Referring to regional energy security, Hamza said that the joint cooperative endeavours in both the gas and electricity sectors were a case in point. He added that both countries need to make the best use of the huge potential available and move forward towards the implementation of existing projects while considering other possible undertakings.

Receiving the credentials of the new Ambassador of Ukraine, Ruslan Nimchynskyi, Anastasiades said that it was  “disheartening” when, at the very moment that the UN Secretary General informed of his readiness to prepare the ground for re-launching the negotiating process, Turkey was responding with illegal and provocative actions

Nimchynskyi, said that his country highly valued a clear and unbiased position of the Republic of Cyprus on the territorial integrity, sovereignty and independence of Ukraine. “In a similar manner, Ukraine fully respects sovereignty and territorial integrity of the Republic of Cyprus. We welcome the negotiation process between the two communities of Cyprus under the UN auspices aimed at reunification of Cyprus on the principle of bi-zonal bi-communal federation,” he noted.