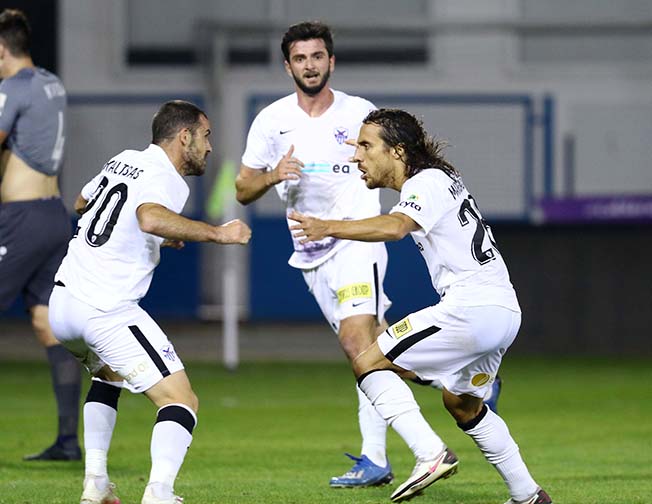 Anorthosis have returned to the top of the Cyprus First Division after a 1-0 home win over Pafos FC on Friday evening, courtesy of Renato Margaca’s second-half winner.

Omonia were also in action a little later, with the Greens thrashing Karmiotissa 5-1 away from home, with five different players getting on the scoresheet.

The on-pitch action took place against a backdrop of officiating complaints, VAR-related confusion, financial issues caused by the non-attendance of fans, and a troubling Covid-19 crisis which authorities are trying to get under control.

Earlier on Friday, the president of every first division football club convened in a meeting hosted by the Cyprus Football Association. The meeting touched on financial issues raised by the clubs, as well as the issue of the current Covid-19 health and safety guidelines.

The outcome of the meeting involved a financial injection of 30,000 euros from the CFA to first division clubs, presumably to help with immediate costs arising from the loss of income following the ban on fans being able to attend live games. The CFA also said that further financial assistance will be provided in the near future without providing additional details as to the exact amount or the dates on which it will be provided.

Moreover, there was also a discussion around the current Covid-19 protocol, mainly the rule stating that if a club finds four positive cases within a seven-day period then their next game is automatically cancelled. Early reports suggest that the CFA wants to up the maximum number of allowable cases from four to ten, with the association then adding a second rule which allows clubs to decide amongst them if a game should be postponed or not if the number of cases is under that maximum limit.

In terms of managing the current spike of Covid-19 cases amongst the clubs, Anorthosis press officer Demetris Christoforou spoke to Cablenet on Friday, saying that the Famagusta club is opposed to any league-wide suspension of games.

“What can be implemented instead is that teams with games in hand can play their previously postponed games while the teams who have played all of their games can have their current games suspended until every club has caught up with their number of games”, Christoforou said.

Meanwhile, in terms of the uproar around the use of VAR and the general level of officiating in the game between Pafos and Omonia on Monday, the conduct of both the CFA’s refereeing department, as well as the president of the Cypriot refereeing committee Bertrand Layec, have been nothing short of shambolic, with contradictions and mixed signals fueling cynicism and suspicion around the entire affair.

Initially, the CFA stated that the referee made the correct choice in not awarding a penalty for Pafos and rescinding the foul. This was followed by Layec saying to the referees that this was not the case and the VAR should have been used only to see if it was inside the area, not if it was a foul or not. This was revoked by Layec himself on the same day through a second statement.

Back to on-the-pitch matters, and Salamina face AEL Limassol on Saturday. AEL can climb above Apollon with a win, although Apollon play against Ermis at home a day later. Apollon will be without key forward Dabo who has suffered a knock during training.

The weekend will wrap up with the game between Ethnikos and Doxa on Sunday evening.

The game between Apoel and AEK Larnaca, as well as the match between Olympiakos and Enosis have been pushed to January due to Apoel and Olympiakos’ Covid-19 cases.

Four arrests as 35kg of cannabis and 300kg of fireworks found