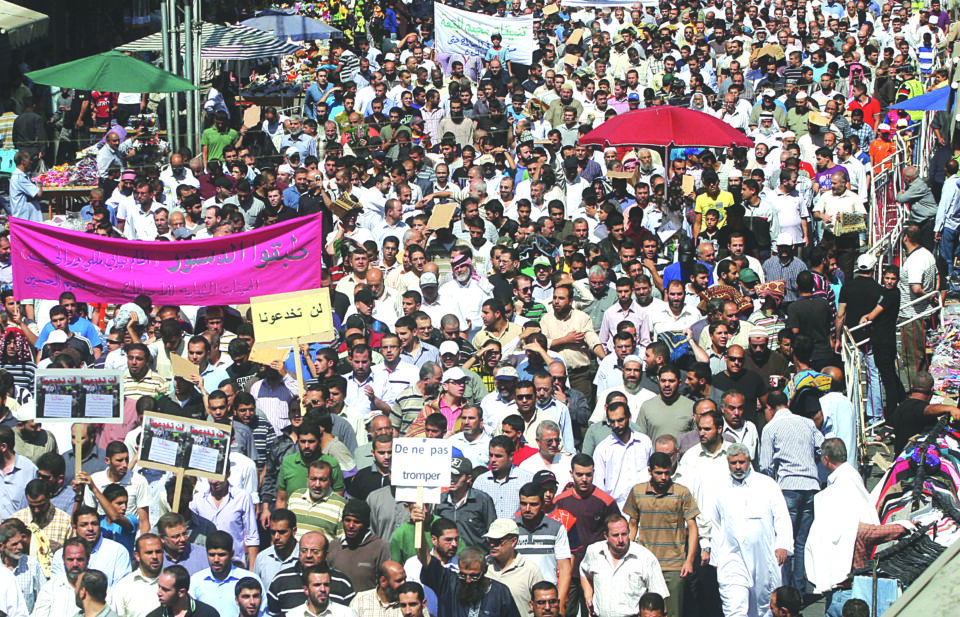 Jordanian demonstrators hold anti-government placards during a protest in Amman, Jordan, on 30 September 2011

Last Thursday marked the tenth anniversary of the day in December 2010 that a young Tunisian fruit seller, Mohammed Bouazizi, set himself on fire outside his local police station.

It was an act of appalling despair – and most likely of unintended consequences, too, as it went on to trigger a wave of uprisings across the region known as the ‘Arab Spring’.

Hundreds of thousands of people across the Middle East subsequently took to the streets, demanding change and the ousting of their rulers.

From Tunis to Cairo and Bahrain to Yemen, regimes that had ruled with an iron fist for decades wobbled – and some even tumbled.

It was heralded by many as a wave of hope – the start of a long-overdue and much-needed movement for change in a region long known for autocracy and dictatorship.

Yet, within a relatively short time, many of those hopes had been dashed.

Civil wars, deepened and prolonged by foreign military intervention, hit Libya, Syria and Yemen, while in many other countries, the old order maintained its grip.

In Egypt, the revolution even went full circle, when long-time ruler Hosni Mubarak – overthrown and imprisoned in 2011 – was released in 2017.

In the meantime, Egypt’s only ever elected president, Mohammed Morsi – whose Muslim Brotherhood was key to Mubarak’s overthrow – was himself overthrown in 2013.

Morsi died in prison six years later, after a now-free Mubarak had testified against him – and in the same Cairo courtroom that had once condemned Mubarak.

Egypt now has a more repressive regime than in 2010, too, according to many human rights monitors. The Committee to Protect Journalists, for example, counts 26 reporters behind bars there at the end of 2019, while only one was in prison at the end of 2010.

Meanwhile, some 16 million people have been displaced throughout the region and around half a million killed.

“The toll has been terrible in terms of the destruction of social, economic and basic infrastructure,” Kawa Hassan, vice president of the Middle East and North Africa (MENA) Programme at the East West Institute, told the Sunday Mail. “You can’t even recognise countries like Syria and Yemen anymore.”

Yet, for all the failed hopes and appalling suffering that the Arab world went through – and continues to go through – it may still be too early to say that the Arab Spring is over.

“There’s a lot of unfinished business,” Joseph Bahout, from the American University of Beirut, told a panel discussion at the Brookings Doha Centre on the day of the Arab Spring’s 10th anniversary.

Indeed, with 2019 seeing uprisings overthrow the governments of Sudan and Algeria, and recent mass protests in Iraq and Lebanon, a second wave of the Arab Spring is already underway.

Meanwhile, too, the underlying causes of the first wave are far from being addressed.

“The situation is untenable,” Joost Hiltermann, programme director for MENA with the International Crisis Group, told the Sunday Mail. “These places are ticking time bombs.”

While Bouazizi’s self-immolation was the immediate trigger for the uprisings, one common, underlying cause ran much deeper.

“You could sum it up in two words,” adds Hiltermann: “Social justice. People across the region felt that the social contract between them and their rulers had been broken – and while the rules were working for the rulers, they were no longer working for the people.”

This was evident throughout the region in the arbitrary nature of justice and the courts, coupled with the petty oppressiveness of the police and secret police. These were two factors that drove Bouazizi to set fire to himself and with which many across the region could clearly and immediately identify.

The broken ‘social contract’ was also evident in “Conspicuous corruption amongst the authorities, which shut down opportunities and prospects for those outside the ruling elite,” says Hiltermann. “There was also an inability of the authorities to provide opportunities for the youth in particular, with unemployment surging.”

By then, with this ‘social contract’ visibly no longer working, the region had become a powder keg – and Bouazizi’s act provided the spark.

Back in the early 1970s, when Chinese communist premier Zhou Enlai was asked what the influence of the 1798 French Revolution was, he famously replied that it was “too early to tell”.

Nowadays, the question of what impact the Arab Spring has had likely requires a similar answer.

“The history of these protests has not been written yet,” says Hassan.

Still driving discontent along is the fact that many of the region’s regimes have failed to address the underlying causes of the uprisings.

Indeed, in many countries, conditions have worsened.

“Economic growth has been weaker in the past ten years compared with the decade that preceded the ‘Arab Spring’,” says Jason Tuvey from Capital Economics in London. “Per capita incomes have fallen relative to those in the developed world, while unemployment has risen or stayed high.”

Meanwhile, political and structural reform has been scarce, except in Tunisia, which remains the only Arab Spring country to have established a functioning democracy.

“All of this provides fertile ground for social unrest,” adds Tuvey.

Western countries have hardly helped, either.

“We often sit here on the outside saying there should be democracy in the Middle East,” says Hiltermann, “but we’ve never really supported democracy there. All the Western money goes to the regimes.”

In Libya, the UK and France launched bombing campaigns, with US backing, to help overthrow Muammar Gaddafi. Then, however, they “had no plan to help build a new structure,” Michele Dunne, director of the Middle East Programme with the Carnegie Endowment for International Peace, told the Brookings Doha forum last week.

In Syria, “The inaction of the West exacerbated a disaster,” says Hassan, “giving room for regional states to intervene.”

Russia, Turkey and Iran filled the vacuum, along with Saudi Arabia, the UAE and Qatar, which backed rival rebel Islamist groups, turning the conflict into a proxy war.

A similar proxy conflict is also now raging in Yemen, with Iran backing the Houthis, while Saudi Arabia and the UAE back their opposition.

Yet, “With great historical events like this, there is always unpredictability,” says Hassan. Few could have predicted the uprisings would happen when they did and where they did – with recent events in Sudan and Algeria also a big surprise to many.

One thing is certain, however: “The genie is out of the bottle,” says Hassan. “One thing we shouldn’t take at all for granted now, is the status quo.”

Christmas turkey can cost anything from €2.99 to €6 per kilo

A secluded world: the monk’s republic of Mount Athos