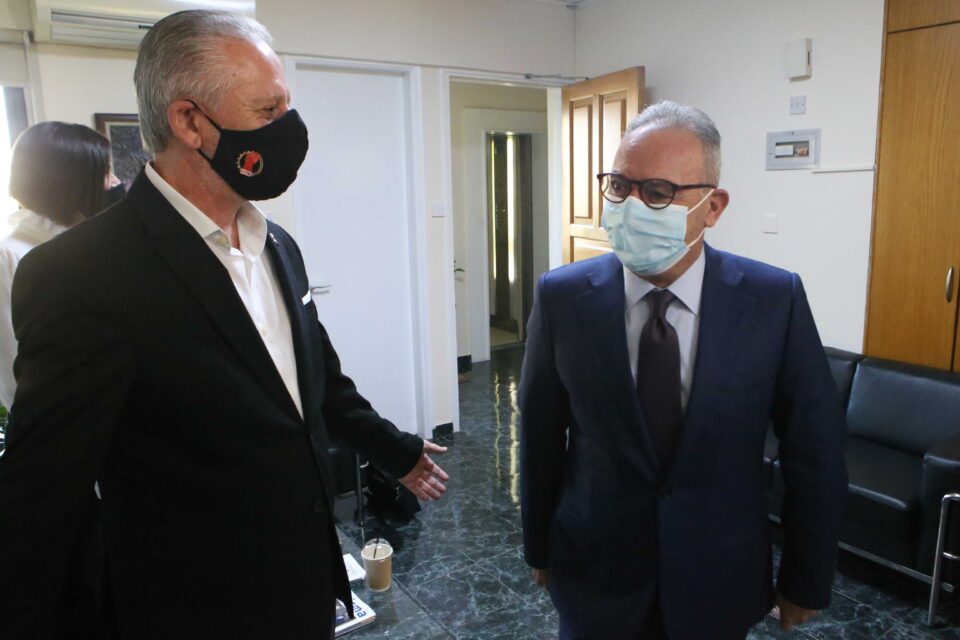 Edek leader Marinos Sizopoulos on Monday pushed his party’s social policy proposals with ruling Disy and Interior Minister Nicos Nouris, in a bid to determine whether the socialist party will back the revised state budget for 2021.

Edek, along with Akel, Diko, the Greens, the Citizens Alliance and Independent MP Anna Theologou vetoed the budget bill last week, all for various reasons.

After the budget was vetoed, the government and ruling Disy launched a series of contacts with opposition parties in a scramble to get them on board and back a revised bill, expected to be tabled for vote in January.

Edek leader Marinos Sizopoulos met with Disy chairman Averof Neophytou Monday morning. He said the main goal was to enrich the budget. There were priorities, he said.

Asked if Monday’s contacts were the key to deciding before Christmas, Sizopoulos said that depended on the government.

“Of course, it also depends on the degree of response that we are met with,” he added. He said there was no “blackmail” or red lines “but there are priorities”. He declined to reveal specific details however.

“They are proposals for institutional and social change, which do not bring any cost to the budget. These are proposals that will bring revenue to the state. We do not want to jeopardise the financial viability of the budget or see it derailed,” he added.

Sizopoulos had submitted his party’s proposals on Friday during his meeting with President Nicos Anastasiades. They include: foreclosures, the upgrade of healthcare services, improvement of quality of life of people in rural areas and refugee estates, and support for working women and their children, and those affected by the economic crisis.

The Edek leader on Monday expressed optimism that “if things remain calm and prudent,” there would soon be a positive result so that the state was not left without a budget.

The government has already announced raises to the allowance given to low-income pensioners so that minimum monthly pension rises to €710.

Neophytou said after the labour minister’s announcement on the pensions, that this satisfied a decades-old request and took into account the views and sensitivities of both Edek and those who voted for the budget and the other parties.

Neophytou also said this was “a historic day” and expressed the hope that parliament would approve the respective funds for 2021, by voting in favour of the state budget in a few weeks.

According to the minister, they discussed Edek’s proposals on social welfare, but also the town planning authority.

“I consider that they are proposals, which can be accepted by the government, possibly with some changes,” Nouris said.

Sizopoulos, reiterating that Edek’s proposals would not incur any additional costs to the state budget, said their implementation would offer social support measures to those in need.

Contacts are expected to continue.

Anastasiades is to meet this week with head of the Citizens’ Alliance Giorgos Lillikas. The party said it has prepared the proposals it will present to the government, in an effort to make the budget yield significant benefits for vulnerable groups of the population.

Permanent secretary of parliament, Socratis Socratous, told the Cyprus News Agency on Monday that the next House plenum after the Christmas holidays has been scheduled for January 14, but it can convene earlier if necessary.