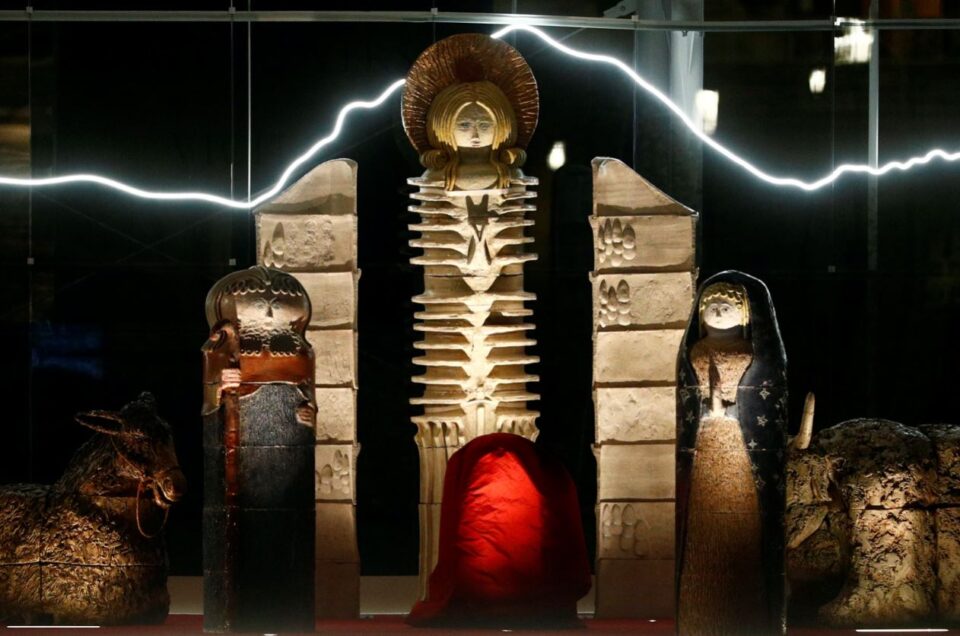 St. Peter’s Square in the Vatican has hosted a few unorthodox nativity scenes over the years, but this season’s entry looks like it came from outer space.

The futuristic ceramic crèche – which includes an astronaut and a character reminiscent of Darth Vader from Star Wars – has received so many terrible reviews that, if it were a Broadway play, it probably would have closed on opening night.

Some social media users – perhaps in keeping with the prevailing mood of 2020 – called it disturbing or lacking reassurance.

Others were more scathing.

“What in the name of sane Christianity have they created in the piazza in the Vatican,” tweeted A.A. Michelangelo. “… Words (are) inadequate for this horrific creation which must have come from the planet Zog”.

Mary, Joseph, the three kings and the shepherds look like cubic chess figures and the animals are squat and square.

The Vatican uses a different nativity scene each year, usually donated by towns or artists.

This year’s modernist, larger-than-life display, which has appeared at various venues, was made by students and teachers in Castelli, an Italian town famous for ceramics, between 1965 and 1975.

Past Vatican nativity scenes have included a broken boat representing the plight of refugees and a person visiting an inmate in a jail cell, symbolising charity. Last year’s was sculpted from 720 tons of beach sand.

The astronaut represents the lunar landings of the late 1960s and early 1970s, according to a description for visitors.

One person on social media responded by posting a picture showing that figure planting a Vatican flag on the moon. Another showed Darth Vader asking for directions to St. Peter’s Square.

Among the scene’s few unqualified fans was American Lino Rulli, who hosts “The Catholic Guy”, a weekday radio programme in Minnesota. “I don’t know what I love more: the spaceman or the guy from the Star Wars Cantina. I really want a small one for our home,” he tweeted.

For others closer to home, the decision by the Vatican City’s de facto municipal government to use it at the end of 2020 of all years was particularly irksome.

“With this global pandemic and everything else the Christian people, or anyone for that matter, was expecting a sign of rebirth,” said Alfredo Chiarelli, 65, who has been selling religious items in the square for 30 years.

“It has confused and saddened a lot of people,” he told Reuters.