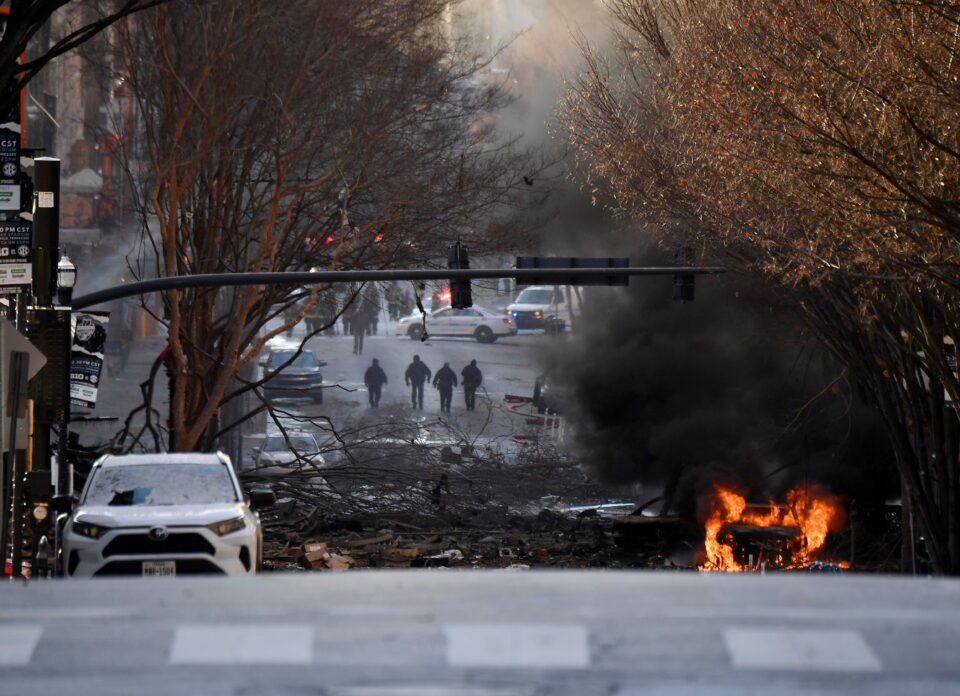 A vehicle burns near the site of an explosion in the area of Second and Commerce in Nashville, Tennessee, U.S. December 25, 2020. Andrew Nelles/Tennessean.com/USA TODAY NETWORK via REUTERS. NO RESALES. NO ARCHIVES TPX IMAGES OF THE DAY

Police and federal agents in Nashville sought clues on Saturday to determine how and why a motor home was blown to pieces in an apparent bombing on Christmas Day that injured three people and damaged dozens of buildings in the heart of America’s country music capital.

The motor home, parked on a downtown street of Tennessee’s largest city, exploded at dawn on Friday moments after police responding to reports of gunfire in the area noticed the recreational vehicle and heard an automated message emanating from it warning of a bomb.

The means of detonation and whether anyone was inside the RV when it blew up were not immediately known, but investigators were examining what they believed might be human remains found in the vicinity of the blast, police said.

Police offered no possible motive, and there was no claim of responsibility, though Nashville Metropolitan Police Department officials called the blast an “intentional act” and vowed to determine its origin.

Agents of the FBI and the U.S. Bureau of Alcohol, Tobacco, Firearms and Explosives were assisting in the probe.

Adding to the cryptic nature of the incident was the eerie preamble described by witnesses – a crackle of gunfire followed an apparently computer-generated female voice from the RV reciting a minute-by-minute countdown to an impending bombing.

Police scrambled to evacuate nearby homes and buildings and called for a bomb squad, which was still en route to the scene when the RV blew up just outside an AT&T building where it had been parked.

Police later posted a photo of the motor home, which they said had arrived in the area about four hours prior to the explosion.

The fiery blast, heard for miles away, destroyed a number of other vehicles parked nearby, shattered windows and heavily damaged several adjacent buildings. Mayor John Cooper said a total of 41 businesses were damaged.

Damage to AT&T facilities from the blast caused widespread disruptions of telephone, internet and fiber optic TV service in central Tennessee and parts of several neighboring states, including Mississippi, Kentucky, Alabama and Georgia, the company said.

Police Chief John Drake said authorities had received no threats of an attack prior to the reports of gunfire at the outset of the incident.

The explosion occurred about two blocks from Lower Broadway, where some of Nashville’s famous live music venues are located. The Ryman Auditorium, former home of the Grand Ole Opry and just three blocks from the blast scene, was undamaged. The Gaylord Opryland and current Grand Ole Opry complexes, which sit outside the downtown area, were not impacted.

“It’s a startling thing to have it happen in Nashville so close, and on Christmas, but we understand that America is in very tumultuous times right now,” country singer John Rich, who owns a honky-tonk club a block from the explosion, told Reuters.