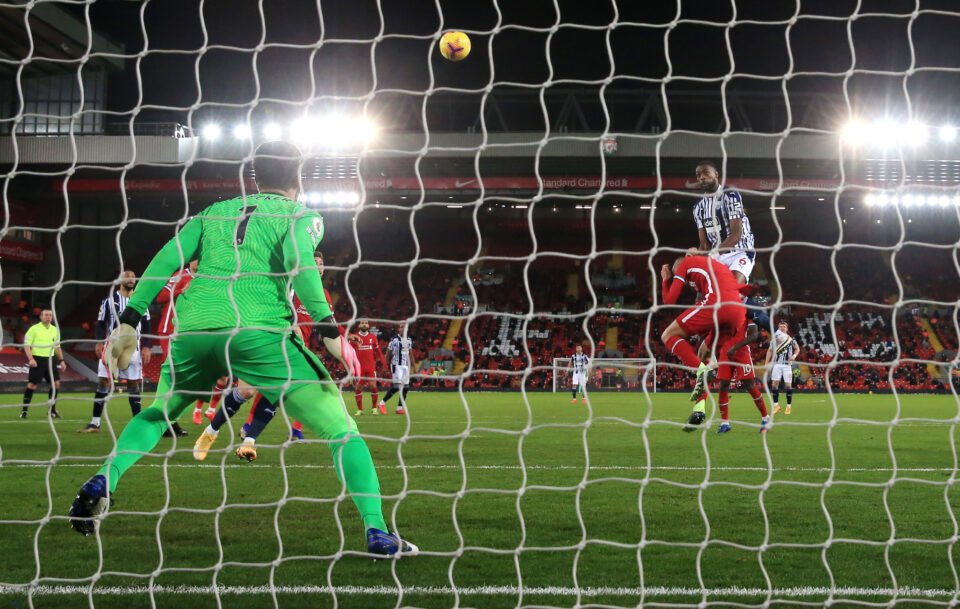 A late header by Semi Ajayi earned struggling West Bromwich Albion a surprise 1-1 Premier League draw at champions and leaders Liverpool on Sunday as the defender cancelled out Sadio Mane’s early opener for the home side.

The result left Liverpool on 32 points from 15 games, three ahead of second-placed Everton. West Bromwich stayed 19th on eight points but their spirited fightback will have given new boss Sam Allardyce plenty to cheer about.

Liverpool left back Andy Robertson acknowledged Liverpool did not deserve to win after a poor second-half performance.

“When you go slack you get what you deserve,” he told Sky Sports. “When you come up against a Sam Allardyce team you know they will stay in it and take the one chance they get.

“We will take the point and move on. We can’t dwell on it but it’s a huge disappointment.”

Liverpool laid siege to the Baggies from the off and it was no surprise that Mane netted in the 12th minute when he chested down a deep Joel Matip pass and swept the ball past goalkeeper Sam Johnstone from 10 metres.

Mane came close to adding a second midway through the first half when he headed wide from close range after a Jordan Henderson cross before Mohamed Salah volleyed inches over the bar from the edge of the penalty area.

West Brom came out with more purpose after the break and Karlan Grant had a sitter saved by Liverpool keeper Alisson Becker before Nigerian centre back Ajayi struck in the 82nd minute against the subdued hosts.

Liverpool conceded a sloppy corner and were punished as Matheus Pereira floated in a delightful cross from the right and Ajayi rose above Fabinho to send a looping header into the back of the net off the post.

Roberto Firmino missed a 90th-minute chance to snatch a win for Liverpool as Johnstone somehow clawed out his downward close-range header and turned it around the post.

Tottenham Hotspur scored after just 57 seconds against Wolverhampton Wanderers on Sunday but Jose Mourinho’s men paid for defensiveness during the rest of the game when the hosts deservedly equalised in the dying minutes.

Seeking to revive their faltering push for a first Premier League title, Spurs had a dream start when French midfielder Tanguy Ndombele received the ball well outside the box to drill a low shot past Wolves goalkeeper Rui Patricio.

Spurs dug in for the second half, demonstrating their new defensive steel under Mourinho to repel marauding runs from Adama Traore and trickery by Fabio Silva in the penalty area.

Just as it seemed the London club would hang on, Wolves‘ relentless attacking paid off as defender Romain Saiss met a corner ahead of Harry Kane in the 86th minute to head the ball in for 1-1.

“We conceded a poor early goal … When you are not focussed for a half second, it’s a goal,” Saiss said. “After, it’s harder when you play a team like Tottenham to come back. Even with the draw, we deserved more because we created a lot of chances.”

Spurs, who topped the league earlier in December, have now taken just two points from their last four games and are fifth in the Premier League, six points behind leaders Liverpool.

“I am frustrated with the result. We had control of the game. But we had 89 minutes to score goals, and we didn’t,” Mourinho said, chiding his team for lack of ambition.

Wolves, who are now 11th on 21 points, were watched by their Mexican striker Raul Jimenez for the first time since he fractured his skull last month.

Without him, Wolves have struggled and are looking to Portuguese teenager Fabio Silva for goals.

He came close in the first half with a snap shot that went just past the post, was charged down by Spurs goalkeeper Hugo Lloris in the second, and missed another close-range chance at the end which would have won the game for Wolves.

“After that, we played a good game.”

Wolves have made a habit of comebacks, while Spurs are repeatedly failing to hold leads, to the anger of their demanding manager Mourinho.