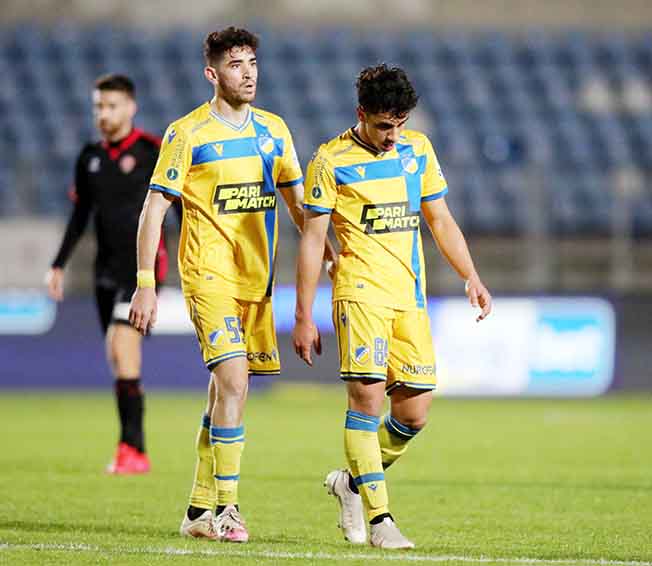 After their Covid crisis, Apoel returned to action with a disappointing 1-0 loss at Karmiotissa on Monday evening

A heavily-depleted Apoel returned to action on Monday evening for the first time since the onset of their Covid-19 crisis, with the Nicosia club falling to a 1-0 defeat at newly-promoted Karmiotissa.

While Karmiotissa have not been in the best form over the past four weeks, they have shown a tendency to play well against the bigger clubs in the division, beating Apollon and drawing against AEK, Anorthosis and Apoel earlier in the season.

On Monday, they stunned Apoel again with a second-minute goal from Kenan Bargan, who scored with a first-time shot from the edge of the area.

Karmiotissa had a major claim for a penalty waved away in the 15th minute and replays seem to favour the view that the referee should have indeed awarded a spot-kick.

Karmiotissa came close to a second goal in the 20th minute when Bargan’s powerful shot from just outside the box was parried away by Miguel Silva. The resulting corner led to another chance for Karmiotissa but Romo’s header went just wide.

Karmiotissa were forced into taking their main goalkeeper Kyriakidis off for youngster Toumpas after the former got injured in the 37th minute.

Both teams hit the woodwork near the end of the first half although it was Karmiotissa who came close to adding another goal. Apoel had a speculative shot land on Toumpas’ bar on its way over the goal while Karmiottisa’s Sassi hit a strong shot which was pushed onto the post by the Apoel goalkeeper.

The second half was disrupted on multiple occasions due to a number of players being injured and in need of temporary medical attention. Moreover, fatigue on both sides further hindered the flow of the game.

Karmiotissa were quite passive in the second half as they absorbed pressure from the visitors. The first major chance for Karmiottisa came in the 79th minute when Romo tried to catch Miguel Silva out from distance during a counter-attack.

Karmiotissa threatened again in the 82nd minute but Christofi’s first-time side-footed shot lacked any accuracy and trickled out wide.

Apoel though had a decent chance to equalise in the 85th minute through a Ludemo free-kick just outside Karmiottisa’s penalty area but the set-piece went over Toumpas’ bar.

Defeat leaves the struggling Nicosia giants in ninth place with 16 points, although they have played two games fewer than the teams directly above them (Pafos and Doxa) and one game less than every team between sixth and first place excluding Anorthosis.

In Monday’s later kick-off, AEL cruised past Olympiakos 3-0 in Limassol.