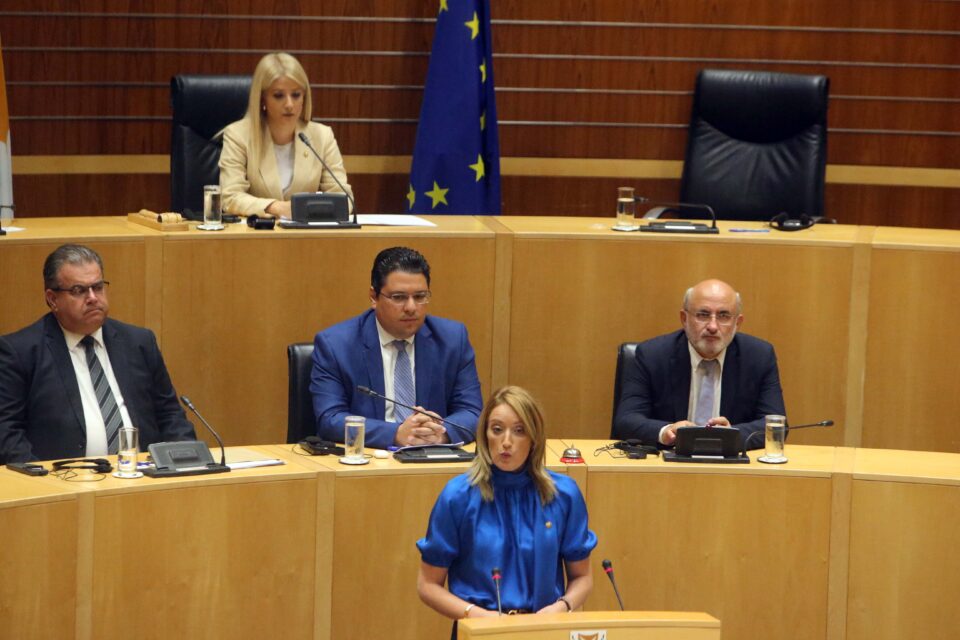 The forced division of an EU member state is not a Cyprus question, but a European question, the President of the European Parliament Roberta Metsola said on Friday in an address to the House.

Metsola also said that Europe must use its experience to bring people together, to ensure one Cyprus under the auspices of the UN plan for peace and in line with shared European values.

“Let me be clear, the only way forward is for there to be a single sovereign, European, State. A bi-communal, bi-zonal federation in line with UN Security Council resolutions”, she said, adding that Europe will never be whole while Cyprus remains split.

Disruption of the status quo – as in Famagusta – seriously jeopardises efforts to restore confidence and for finding workable solutions, Metsola said. Famagusta should become an example of bi-communal cooperation instead of a point of contention.

“A win-win is possible, and the European Parliament will be there to put all our resources to your disposal to make the steps towards progress, towards peace, towards reunification,” Metsola said. “We must build trust.”

She went on to say that the history of Cyprus reads as an example of resilience and that the sacrifices made by Cypriots, bring Cyprus on the path to growth, prosperity and sustainability, despite the difficult global winter coming. “The history of your people is indeed inspirational, but it is the future of this island nation that inspires more. And if Cypriots can teach the world anything, it is that the future is full of possibility”.

Metsola’s visit began with a meeting at the presidential palace in Nicosia where she also discussed migration, energy, and the Russian invasion in Ukraine with President Nicos Anastasiades, followed by a meeting with House President Annita Demetriou. Statements were made after both meetings after which Metsola addressed the House.

Metsola also called for the need to resume Cyprus negotiations. Referring to the confidence building measures she said that “such measures would pave the way for trust building between the two communities providing an impulse for a shared solution.”

Responding to a question on when the EU would be taking sanctions against Turkey as it has taken against Russia, Metsola avoided a direct answer.

“…we have been extremely clear that those countries, especially those countries that have been aspiring to come closer to the EU, not only need to stand by the sanctions adopted against Russia in the context of the illegal invasion in Ukraine,” she said.

“The district of Varosha and the city of Famagusta is a symbol for the Cyprus issue, it represents the prospects of a peaceful solution, the latest actions taken at the coastal area jeopardise the efforts to resume direct talks…[European Parliament] has repeatedly condemned the fact that Turkey continues to violate the UN Security Council resolutions and to this end I support a prompt return of Varosha to its lawful inhabitants,” she added.

Metsola was further pressed with the same question during her visit to the House of Representatives only to reiterate her initial response.

Responding as to whether there will be an EU representative participating in negotiations if and when they resume, she said: “We always push for the resolution of conflicts, we want the world to come to the negotiating table and we push for a solution that both sides agree on and if that means that in addition to the UN representatives, EU representatives are also needed, this is something the EP accepts.”

The EP’s president said the only way to move forward was via a sovereign, European state,  a bizonal, bicommunal federation aligned with UN security Council’s resolutions. She said the situation such as what was happening in Varosha seriously endangers efforts to restore trust and the finding of workable solutions.

She also touched on the recent gas find in Cyprus’ EEZ saying it showed that Cyprus can be not only independent in energy “but also a key strategic partner and ally for the EU in diversifying its energy mix.”

The EP’s president also met Friday with UN special representative Colin Stewart at Ledra Palace for a briefing on the UN’s peace efforts on the island.

She also met presidential candidate and Disy leader Averof Neophytou. Her schedule also included a meeting with the mayor of Famagusta and participation in an event organised by the students of University of Cyprus and youth groups.

Anastasiades in his comments following their meeting described Metsola as a “leader…who can help steer Europe out of the multiple crises which we collectively face”.

“Cyprus continues to rely upon the support of the European Union and European Parliament in our efforts to reunify our country,” he said.

House President Annita Demetriou in her comments during the day drew analogies between the Russian invasion of Ukraine and the Turkish invasion in Cyprus wondering why Cyprus was not receiving the same support from the international community and why Turkey was being allowed to act as a broker between Russia and Ukraine at the same time it violates international law, human rights and the rule of law.

“Revisionism and expansionism cannot be treated in the logic of double standards. We expect the same sensitivity and determination in relation to Cyprus and we are sure that we can count on your support,” she said.

What are the different types of Catastrophic Injury