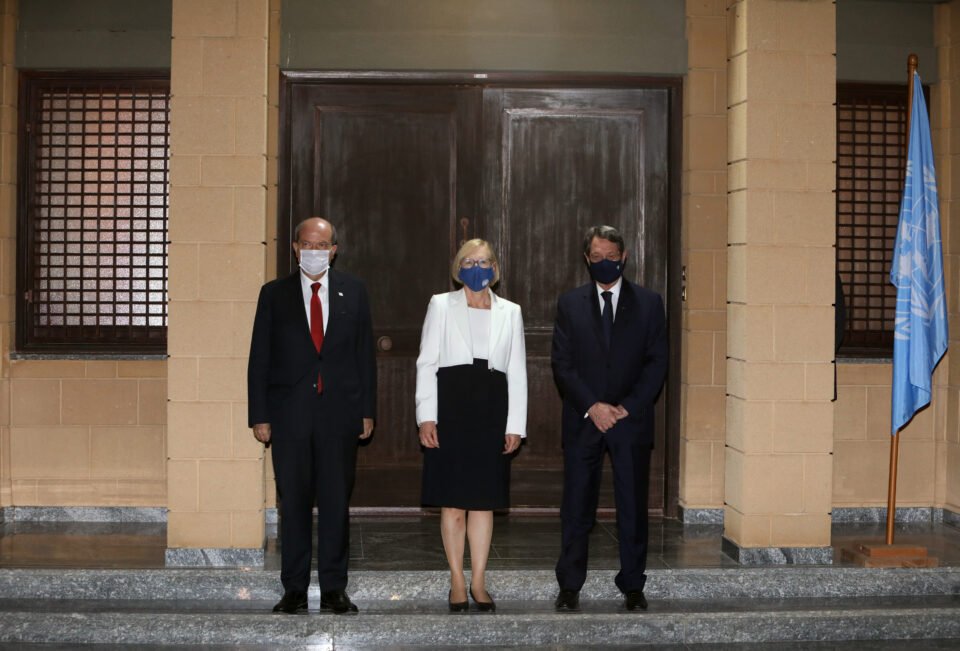 With the Covid-19 pandemic as a backdrop, the Cyprus issue in 2020 was characterised by an interlocking set of relations between multiple conflicting parties that finally cleared a rocky path towards an informal meeting in Geneva from April 27 to 29, 2021.

It took four years since the failure at Crans-Montana to get there, that is everyone sitting in the same room.

Throughout 2020, apart from the major events involving the closing of the crossing points, the election of a new Turkish Cypriot leader and moves to open the closed-off town of Varosha in Famagusta, the stars had to align again between Turkey and Greece, Turkey and the EU, Turkey and the north, Cyprus and Greece, Cyprus, Greece and the EU, and the two Cypriot communities themselves.

The UN mainly sat on the sidelines waiting for everyone else to make up their minds, and when the Secretary-General thought the time might be right, In February 2021, finally called the meeting in Geneva. Naturally that was not without its hiccups either especially when Antonio Guterres suggested at one point that the UN was open to hearing alternative visions for the future of Cyprus if the same vision was shared by the parties involved.

Guterres’ statement was an allusion to a move away from the long-standing agreed basis for talks of a bizonal, bicommunal federation (BBF). President Nicos Anastasiades on several occasions talked about a loose federation since Crans-Montana in 2017 and Turkey has consistently said he brought up the possibility of a two-state solution even then but he denies this, although opposition Akel has called him out on it a number of times since.

The president’s dilemma going forward was resolved when Turkey and the new Turkish Cypriot leader Ersin Tatar began insisting the only way ahead was a two-state solution. Off the hook, Anastasiades reverted to the BBF and the blame game was pre-set. Because the EU will not hear of a two-state solution, Ankara was lined up to take the fall for any new failure if it kept insisting on its position.  But some agree it might be a tactic to start from such an extreme position as it leaves room to walk back if necessary.

But let’s rewind to the first half of 2020 when the Cyprus issue was taken up entirely by Turkey’s illegal drilling in the island’s exclusive economic zone.  By June tensions were high, not only because of Turkey and Cyprus. Ankara was also poking at Greece. France’ Emmanuel Macron also dipped his toes in the Med waters to support Athens and Nicosia, causing a headache for the EU, which prefers to view Turkey as its entirely redeemable wayward child. Like any spoiled offspring, Ankara could have a tantrum at any moment but instead of just stomping its feet it could easily flood Europe with millions of refugees.

In a move that had nothing much to to with Cyprus and everything to do with Brussels not wanting to see Turkey and its sibling Greece going at it, Mommy Germany did its best to bring them together. Cyprus, for all it’s hobnobbing with Big Brother Macron, was not a factor for the EU and ultimately all Ankara got was a finger-wagging in June and threat of punishment if it did not behave into the second half of the year when a new family meeting was scheduled.

In the meantime low-key talks opened up between Athens and Ankara to resolve their differences. Turkey pulled out its drillships from disputed areas and Cyprus’ hopes of sanctions against Ankara fell by the wayside even though Turkey and the Turkish Cypriot side continued their provocations in the north of the island by making a big show about opening Varosha in the latter half of the summer. Brussels could not care less.

In September, Cyprus found a new way to stick it to the EU and threatened to veto sanctions on Belarus if none were imposed on Turkey at an upcoming council meeting, causing a near-crisis in the corridors of power.

At a foreign ministers’ meeting ahead of the council summit  all the countries – including Greece and France that were supposedly close to Nicosia – backed sanctions on Belarus, with Cyprus the only country holding out. And although Cyprus did not cast a veto on the Belarus sanctions per se, its stance telegraphed exactly that.

But Nicosia’s brinkmanship tactics backfired. The EU’s foreign policy chief, Josep Borrell, evidently taking a dig at Cyprus, said later that the bloc’s failure to act fast on Belarus hurt the EU’s credibility. Reuters cited an unnamed Cypriot diplomat as saying: “I’m afraid that, as things stand right now, we will have to insist on Belarus. It’s the only weapon that we have. The Turks are playing a clever game. Being more engaging towards Greece, they are trying to drive a wedge between the other members and us. We seem to have been left by the wayside.”

Indeed, the summit did not sanction Turkey and the Belarus action went ahead. EU diplomats had warned the best Cyprus could hope for from the summit would be a promise for tough sanctions on Turkey “in the future”. And thus, the can was kicked down the road one more time and Nicosia had no choice but to say it was  yet again “satisfied” with the outcome.

Just a couple of weeks later the government pulled off a thrilling coup of one-upmanship when then a dutifully-masked US Secretary of State Mike Pompeo arrived at the door of the presidential palace on a dark Saturday night two hours late, seriously upsetting the Turkish Cypriot side which had been offered a mere phone call with The Donald’s sidekick.

They need not have worried, there were “no major developments in the Cyprus issue” because Pompeo’s visit had much more to do with trying to wrest Cyprus from Moscow’s grasp and muscling in on the region’s energy plans.  Pompeo was briefed on Varosha, the president said but didn’t specify whether he had to pull out a map to help in that respect.

The next hurdle for the Cyprus issue came with the (delayed) election in October of new leadership in the north, ousting Mustafa Akinci, the most BBF friendly Turkish Cypriot leader in a decade. Akinci, who felt betrayed by Anastasiades, no doubt repeatedly since 2015, had offended Turkish President Tayyip Erdogan one time too many. In that sense, there are worse things than being ousted, but it was not a promising development for the Cyprus issue unless somehow both sides want a two-state solution, one openly and one secretly.

Two-State Tatar did not waste any time and went full-steam ahead with plans to open Varosha, creating a new front for the Cyprus government to fight. Other than a few platitudes from the UN and EU and a repetition of UN resolutions on the issue, the message seemed to be “solving the Cyprus issue will solve the Varosha problem”.

Although true, these are weasel words because based on actual history and experience, both the EU and the UN know that the pace of resolving the Cyprus issue is not conducive to saving Varosha from resettlement, and that Turkey listens to no one. Meanwhile, Tatar milked it for all it was worth, being interviewed in an armchair in the middle of a street among the abandoned and ruined buildings belonging to Greek Cypriots. Not a good look for reconciliation.

The two leaders did deign to meet in November 2020. They went in with opposing opinions and came out the same way. They did agree to one thing, that both would be open to “exploring the possibility to convene an informal five-plus-United Nations meeting, in a conducive climate, at an appropriate stage”.

Four months later, Guterres called the Geneva meeting. The intervening period consisted of the usual back and forth between the two sides and the Secretary-General’s special envoy Jane Holl Lute paid a few visits, most recently April. But Lute, the Great Silent One, never gives the game way though some reports, possibly based on the use of body-language experts, suggest she did not have high hopes for Geneva. So business as usual then.

But wait, there was still some excitement to come in early 2021 with a new EU summit slated in March and the hype was ramped up to the nth degree. It was another chance to put Ankara in its place.

In his intervention at the Council meeting that was determined to focus on the EU’s “positive agenda”  with Turkey, Anastasiades quite rightly stressed that Ankara’s de-escalation of its illegal activities in Cyprus’ EEZ should have consistency and continuity but no one can guarantee that, not even the almighty EU or even the Almighty himself.

The aim this time was to have the EU summit conclusions reflect the link between the bloc’s relations with Turkey and developments on the Cyprus issue, which the foreign minister Nikos Christodoulides tried to tell everyone it was a “mission accomplished”.

In its conclusions, the bloc agreed to make good on a 2016 promise to deepen trade ties with Turkey, but also warned Ankara to expect sanctions if it restarted exploration over disputed hydrocarbons in the eastern Mediterranean.

“We call on Turkey to abstain from renewed provocations or unilateral actions in breach of international law,” EU leaders said in a statement following a discussion by video conference, saying they would review progress in June. Can, road, kick, again.

Clearly EU leaders were hedging their bets that the Geneva conference would kickstart a new peace process and remove the Cyprus issue from their working agenda for  a while at least.