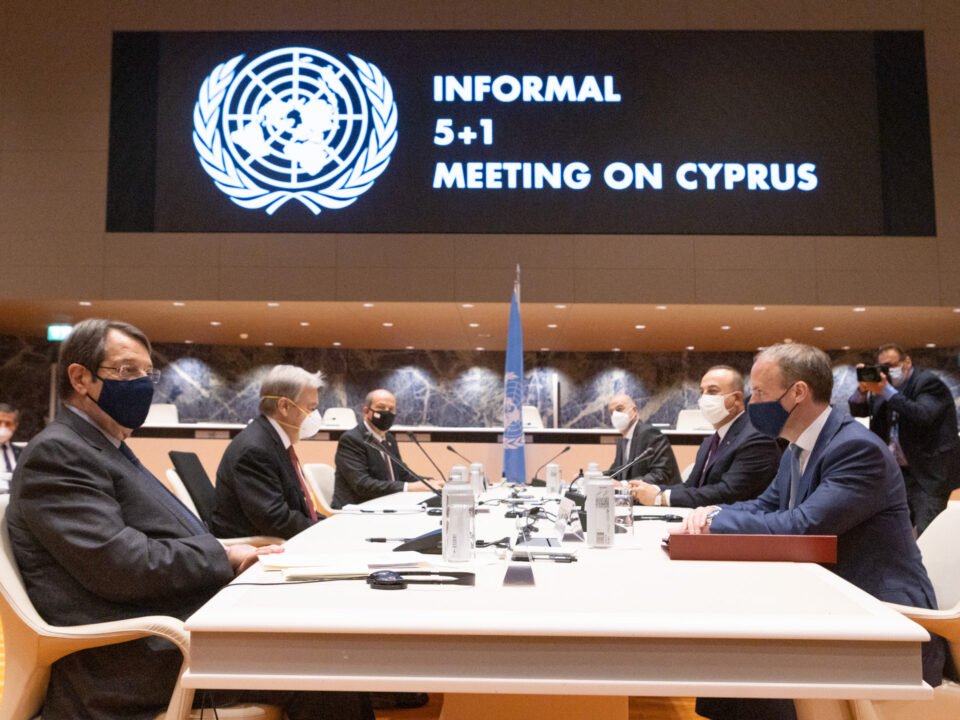 After an intense three days in Geneva, the UN said on Thursday there was not enough common ground for Cyprus negotiations to re-start but they would try again in the near future, Secretary-General Antonio Guterres said.

Speaking at the end of the last session Thursday morning, and after referring to the divergent positions of the two sides, Guterres said: “This was not an easy meeting.”

The island’s two communities along with the foreign minsters of guarantors Greece, UK and Turkey, took part in the informal summit coordinated by the UN to find a common ground so that substantive talks on the Cyprus problem  could resume. There had not been high hopes for the meeting in any case.

“We have been able to agree that I will convene in the near future another meeting of the 5+1, the five plus the United Nations, again with the objective to move in the direction of reaching common ground to allow for formal negotiations to start,” Guterres announced at the end of the final plenary session where he heard the final positions of each side.

“The truth is that, in the end of our efforts, we have not yet found enough common grounds to allow for the resumption of formal negotiations in relation to the settlement of the Cyprus problem,” Guterres said.

“But I do not give up,” he added, stressing that his agenda is strictly to fight for the security and well-being of the Greek Cypriots and the Turkish Cypriots, “that deserve to live in peace and prosperity together.”

Guterres said there would be consultations before the next meeting as there was before the Geneva meeting with the aim of trying to create as much as possible the conditions to allow for the next one to be successful. It is believed a special envoy will be appointed to carry out these consultations but there was no information if it will be Jane Holl Lute or someone else.

Guterres said he would report to the Security Council on the different positions expressed in the summit.

President Nicos Anastasiades expressed his satisfaction with the way Guterres handled the demands of the Turkish side for a two-state solution.

“I express my satisfaction because the UN Secretary-General kept an impeccable stance and was clear to the Turkish Cypriot community and Turkey that the solution they seek cannot be recognised by the UN or the EU,” the president said after Guterres declared the summit was over.

He added that, given the circumstances, and the Turkish side’s demands both Guterres and the Greek Cypriot side had successfully managed the situation to prevent the achievement of the goals set by Turkey.

“During our presence here, our side with absolute consistency in what it has proclaimed so far, has projected but also with constructive proposals has contributed to achieve a lot of convergences,” the president said.

Turkish Cypriot leader Ersin Tatar and Turkish Foreign Minister Mevlut Cavusoglu both said they would not back down from their position on a two-state solution on the island.

Cavusoglu also accused Anastasiades of being like “a broken record” arguing he did not bring anything new to the table. Anastasiades confirmed during the summit that the Greek Cypriot side’s proposals as submitted in Crans-Montana in 2017, were still on the table.

The president jokingly responded that it seems Cavusoglu is still stuck “in the era of gramophones” since today there are more modern media generating music.

He added that he did bring to the table a series of confidence-building measures (CBMs) to which the Turkish side reacted saying they did not go to the informal summit to discuss CBMs, despite his argument this could be a game-changer.

The president said that the CBMs he proposed would in fact, lift this feeling of isolation the Turkish Cypriots feel because both Famagusta port and the Tymbou airport would open to international markets.

The CBMs he referred to, concern Varosha being brought under UN administration to allow the return of the lawful owners and Tymbou airport going being brought under UN so that it could open to international destinations and lift the so-called isolation of the Turkish Cypriots. He also suggested the operation of the Famagusta port under EU regulations and the creation of an escrow account where the share of the proceeds from the exploitation of natural resources for the Turkish Cypriots will be deposited. The Turkish Cypriots will be able to withdraw money from this fund under the condition that Turkey will not question Cyprus’ EEZ because this affects both Greek Cypriots and Turkish Cypriots.

Turkish Cypriot leader Ersin Tatar had submitted on Wednesday a six-point document calling for the adoption by the UN Security Council of a resolution recognising northern Cyprus as a state. After this was achieved, then the two states would negotiate their future relationship and for an agreement on property, security and border adjustment, and relations with the EU.

After the summit was over, Tatar said he would not go to talks without the north’s sovereign equality being recognised. On Anastasiades’ CBMs he said among other things, that the fact that the Greek Cypriot leader offered his own approval for the opening of Varosha and the Tymbou airport under UN administration, was an insult to the Turkish Cypriots.

He also said that they could discuss CBMs in Cyprus, not during the talks in Geneva. Tatar also said he was going back home “with peace of mind.”

Cavusoglu said Turkey fully supported the Turkish Cypriots’ vision for a two-state solution while Greece and the Greek Cypriots did not bring a new vision and insisted on their outdated position.

Anastasiades also said that the Turkish side’s positions on a two-state solution violate the UN mandate for a settlement.

The president also thanked the Greek Foreign Minister, Nikos Dendias, for his support and for being in full coordination with the Greek Cypriot side’s efforts.

He also said that the British delegation was also “moving towards the same direction” and that, despite some other views they may have, “in none of their positions did they go beyond the framework set by the UN or the agreed solution basis.”