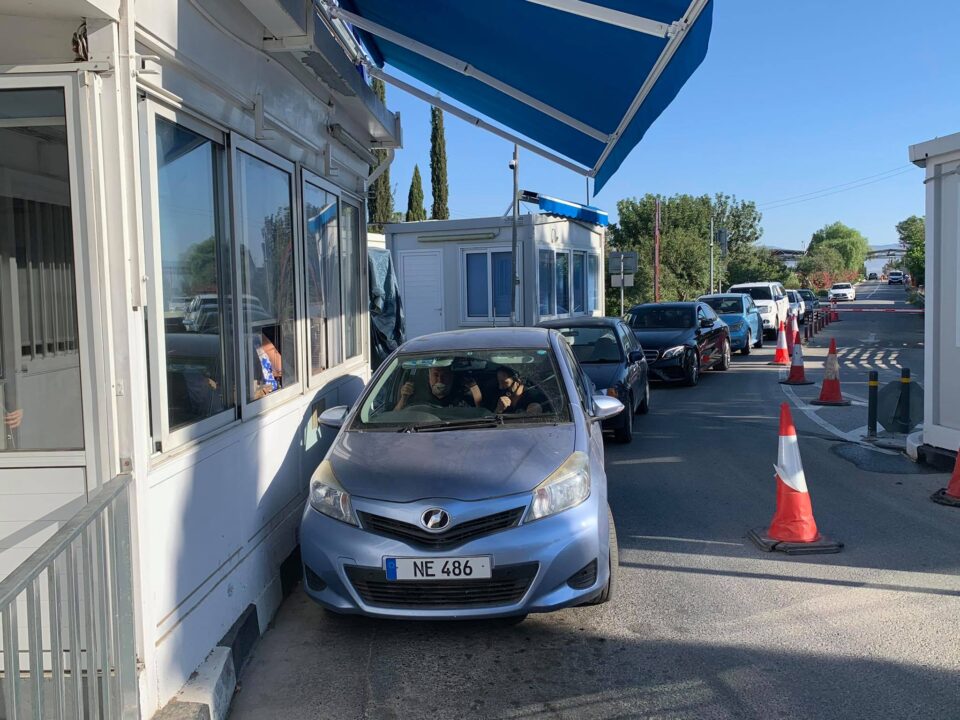 People across the divide met old friends again on Friday as nine crossing points reopened and cars and pedestrians had easy access to the other side for the first time in over a year.

Panayiotis Nicolaou, 72, went for a walk in the old town early in the morning and said he would go meet his Turkish Cypriot friends for a coffee.

“I am very excited that the checkpoints opened as I can go see my friends that I have missed terribly over the past year,” a 34-year-old Greek Cypriot added before he went to receive a rapid test to cross to the north.

Another Greek Cypriot pensioner from the mixed village of Fania, Kyriacos, met his Turkish Cypriot friend, Untac, in the north after keeping in touch online.

Other Greek Cypriots and permanent residents said they would cross to take advantage of the cheaper prices in the north. A shopkeeper in the north told the Cyprus Mail that the area had been “a dead zone for months” and expressed hope that traffic would pick up.

The nine checkpoints situated along the 180km Green Line reopened between 5am and 8am.

A female employee at a Turkish Cypriot shop in Ledra street was holding a welcome sign and offering loukoumades, a traditional dessert similar to doughnuts, to the first people who crossed.

Turkish Cypriot reports said some Nicosia shopkeepers had rolled out red carpets but were later removed as the ‘mayor’ thought the move was excessive.

Nicosia’s central Ledra Street was shut for more than a year. Other checkpoints have opened sporadically but different rules on either side of the line made crossings practically impossible. Pre-pandemic, they were used by thousands every day.

“The closure split families, friends and loved ones and risked cementing the division of our country,” peace group that has long campaigned for the opening of the checkpoints Unite Cyprus Now said.

Speaking on CyBC radio, Foreign Minister Nikos Christodoulides described the reopening of crossings as “a positive development” but added that “it is not a solution to the Cyprus problem”.

To cross, adults and minors aged 12 and over must present a negative rapid or PCR test certificates in print form, not older than seven days.

Results on text messages (SMS) will not be accepted. The test certificates must also be in English, to be understood by the officials of each community.

“Those who come to the north should not worry,” Turkish Cypriot Leader Ersin Tatar said during his visit at the Ayios Dhometios crossing. He noted that the Turkish Cypriot side has recorded one tenth of the cases traced in the south, which counts 72,000 positives since the Covid outbreak..

Despite the lower number of Covid cases in the north, Tatar reiterated the need to abide by coronavirus protocols such as the face mask mandate and social distancing.

The reopening of checkpoints will benefit trade and the economy, Tatar said.

He also expressed hope that contacts between the two communities will continue. Tatar said he referred the issue of people originating from Turkey who live in the north and are unable to cross to the south to the UN.

Police spokesman Christos Andreou said that all crossing points are well staffed with officers having returned to their posts after being transferred to other duties while they were closed.

According to police data, the busiest crossing in Nicosia was Ayios Dhometios, with 1,271 people crossing to the south and 835 to the north by 2.30pm.

The Ledra Street crossing was used by 189 people to cross south, while 264 visited the Turkish Cypriot side during the same time period. Some 130 people passed through the Ledra Palace crossing to visit the government-controlled areas, and 99 people crossed to the north.

Karayiannis said the regulations cause a “small inconvenience” to those wishing to cross, as they do not allow vaccinated people to cross without a negative covid test. The mayor added that he expects more people to use the crossing over the weekend.

The crossing points of Strovilia and Pergamos also failed to see many visitors on Friday, with more people expected at the weekend, a source from the British bases in Dhekelia told CNA.

Meanwhile, the community leader of Kato Pyrgos Nicos Kleanthous said he hoped the reopening would increase visitors through the Limnitis crossing, but a permanent solution must be found to prevent the area from becoming isolated once the crossings close.

Residents of Kato Pyrgos Tyllirias use the Limnitis crossing which cuts down the travelling time to Nicosia to 1.5 hours instead of three.

The first people who crossed at Limnitis at 5am were workers commuting to the capital, Kleanthous said.

The crossings resumed after an agreement between President Nicos Anastasiades and Turkish Cypriot leader Ersin Tatar to synchronise Covid-related measures, while the epidemiological situation will be reviewed on a biweekly basis.

As per the agreement, the epidemiological situation will be categorised as: level 1 (green) no restrictions, level 2 (orange) seven day negative rapid or PCR test and, finally, level 3 (dark red) closed to the public.

The two sides are also expected to discuss the issue of people who are fully vaccinated. However, concerns were raised as the majority of Turkish Cypriots received the Chinese vaccine Sinovac which has not been approved yet by the European Medicines Agency.

The government has been delivering to the north quantities of the vaccines the EU has reserved for Cyprus.

On Friday morning, another 5,000 AstraZeneca vaccines were to be delivered to the north.

The eight most popular stunt tricks used in movies