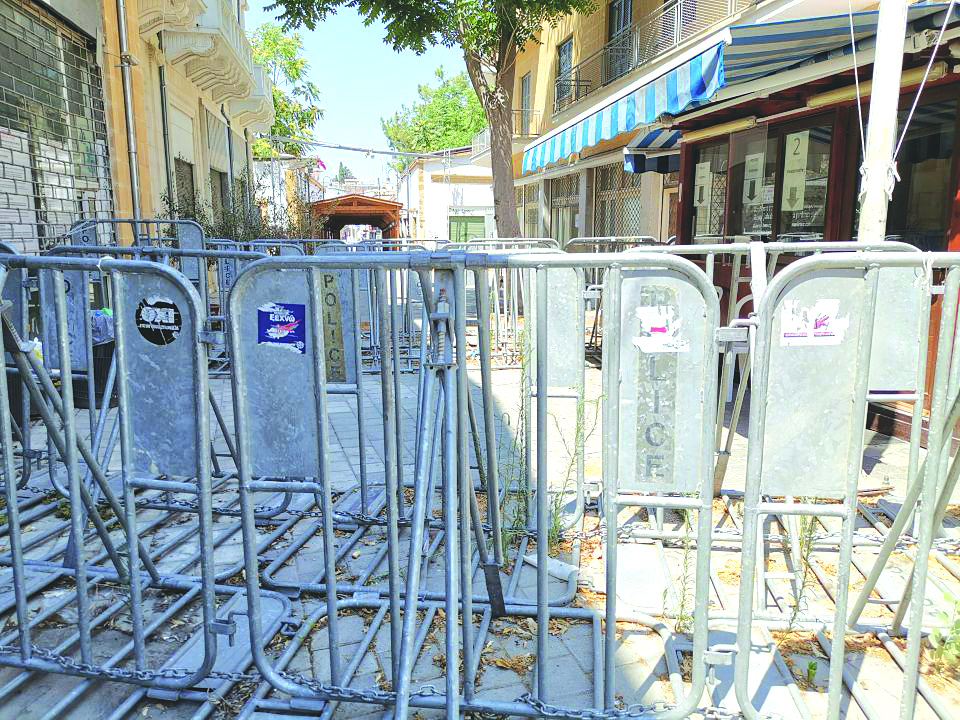 A year ago the first checkpoints were closed to stop the spread of the pandemic. It now remains practically impossible to move or trade from one side to the other, leaving many feeling that politics is behind it. Nick Theodoulou speaks to those frustrated by the lack of movement

The last time I crossed to the north it felt like being on the set of Contagion, or some other dystopian film: shop signs creaked eerily in the cold wind as the moon shone above deserted streets.

After having crossed from the Ledra Palace checkpoint, I hurried along the empty Saray Square and found what appeared to be the only bar still open, where people debated how long they thought the measures would last – the official seven days? Two weeks? A month?

No one at the bar that night foresaw the crossings remaining effectively closed a year later.

For many, the crossings have mainly been a curiosity with a significant amount of the population either having never crossed at all or only once or twice.

But for others, such as 26-year-old Erk Sadrazam, spending the past year confined to only one part of the island has been a strange experience.

“Ever since I was 11 and went to the Falcon School in Nicosia I spent a lot my time in the south, many of the important years when I was growing up was shared – and I feel like it’s been good for me to know both communities, I think it’s made me a better person,” he told the Sunday Mail.

On February 28, 2020, it was announced by the Republic that the crossings at Ledra Street, Astromeritis, Lefka and Dherynia were to close for seven days as part of measures to prevent the possible spread of the coronavirus.

Ever since, a dizzying array of measures which often conflict one another have been imposed at the few checkpoints which are still open– effectively barring the average person from crossing.

In June for example, the north announced that it would open the Ledra Street checkpoint but it remained closed on the south side and differing testing criteria priced many out.

Even a year after the initial closures some are smarting over them, seen as a major setback by activists such as Kemal Baykalli, who told the Sunday Mail that: “The fact we have taken for granted the crossings since 2003 is a concern.

“The problem with the crossings issue is that it gives you the feeling that some people can arbitrarily stop it whenever and this is unacceptable, it’s as if to travel within our own country is a privilege and it can be taken away whenever they want,” the Unite Cyprus Now activist said.

“When the crossings opened in 2003 it was the most important development since 1974, in the sense that it brought the communities together and it showed everybody that we can survive and live together,” Baykalli said.

And since the checkpoints closed, it has been a turbulent year for the island still locked in a frozen conflict: parts of Varosha were reopened in October after 46 years and hardliner Ersin Tatar became the Turkish Cypriot leader as the two communities are set for a late April meeting in Geneva to find common ground for continuing negotiations.

Amid the heightened tensions, particularly in October, Greek Cypriots armed with bats and sticks briefly breached the Dherynia checkpoint in protest over the partial reopening of Varosha.

Since the checkpoints opened in 2003 for the younger generations contact between the two communities has been a relatively easy option for most of their lives – even if not everyone chose to do so.

And that is why for Greek Cypriot head of the bicommunal technical committee for cultural heritage Takis Hadjidemetriou the current situation is such a major setback.

Asked whether we are now in a situation similar to prior-2003, he told the Sunday Mail that: “[It’s] worse, because then the Green Line was not passable but now a different environment has been created where people were communicating.

“Meaningful friendships have been created which are now on hold and cooperation has been cut.”

But how does he see the situation going forward, does he feel optimistic?

“What I feel is that we will not end our efforts for communication and cooperation between Greek Cypriots and Turkish Cypriots towards resolving the Cyprus problem,” Hadjidemetriou said.

“And I don’t see this as an issue of optimism or pessimism but one of patience, patience and decisiveness.”

For activists such as Kemal, the closure of the crossings came as a double blow: not only were people prevented from seeing each other but he also sees politics behind the decision, not just the pandemic.

“The first time the decision [was made] to sever the crossings in Ledra Street we were very disappointed because we never believed it was just for the measures against the virus.”

He explained how international flights were ongoing, and many other crowded events were still taking place which led him to believe that: “The virus was used as an excuse to cut the main breathing line through the heart of Nicosia.

“We wanted the sides to take measures against the virus but in coordination, to work together on this issue.”

From the beginning, many called for the two sides to tackle the virus together. Most recently, a list of ten suggestions highlight the role that the bicommunal technical committees could play in the normalisation process, among others.

But hardliners across the divide are happy enough with the crossings remaining effectively closed – as was seen back in March when Apoel fans descended on Ledra Street, demanding the closure of all checkpoints.

They were responding in part to the scuffles which initially broke out at a demonstration the previous month against the closure of the checkpoints, where one protester grabbed a national guardsman who was also stationed there, as others barged through the closed checkpoint.

Others had hoped, especially during the relative lull of cases in the summer, that crossings such as that in Ledra Street would reopen.

Asked about this at the time, a member of the Republic’s Covid-19 advisory team said that reopening was a political decision.

“The security measures in the crossings work normally from both sides. What the Turkish Cypriots have put forward is whether Ledras can reopen. We told them it is a political decision and no longer up to the epidemiological team,” he said.

“The epidemiological picture is good from both sides therefore if the two leaders proceed to open Ledras, they will.”

But half a year later, little – if any – progress has been made in coordinating responses to the coronavirus pandemic: only some workers from the north are allowed to cross under strict conditions.

With the upcoming informal five-plus-one meeting in Geneva, there are hopes that this might change.

“The Cyprus problem will be solved primarily through Turkish Cypriots and Greek Cypriots understanding one another, and in light of the upcoming informal conference the first thing that must happen is the reopening of the crossings – it is much more than a confidence building measure, it is a necessary one,” Hadjidemetriou said.

Peanuts: how to avoid their carcinogenic threat