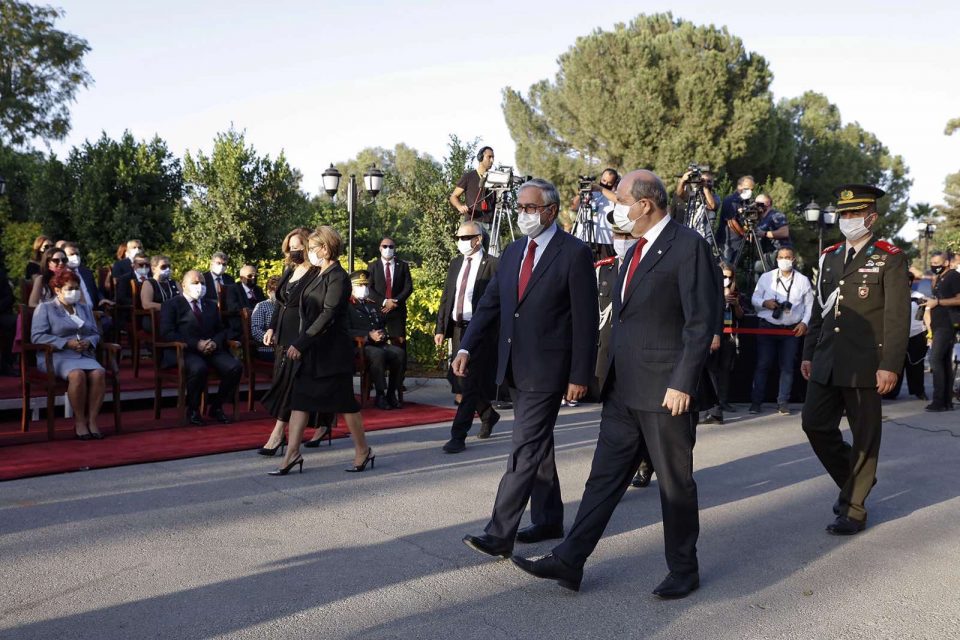 At a handing over ceremony, Akinci said he was leaving with peace of mind that he had done his best to serve the interests of his people and that he had worked towards finding a solution to the Cyprus problem.

“I find it useful to remind again of the importance of avoiding steps that would give ‘an out’ to the Greek Cypriot side, which is reluctant to show the necessary will for a solution because they use it as an advantage to represent Cyprus alone by usurping our partnership rights,” Akinci said.

Tatar was sworn in at a session in ‘house plenum’, which was attended by officials of other parties, former Turkish Cypriot leaders, and his family.

He then placed flowers at the memorials of Ataturk, Fazil Kucuk, and Rauf Denktash monuments.

Tatar said the Greek Cypriots failed to see the Turkish Cypriots as having equal rights on the island.

“Nobody can punish us for establishing our state. Lifting the embargoes [on the TRNC] will be our main goal,” he said.

On Turkey, he said the north and Ankara would act in harmony.

Commenting on the Cyprus problem, Tatar said two states were a necessity, and he would convey this message to the UN Secretary-General.

“I look at the five-party conference in terms of bringing the two state issue to the table,” he added.

The event was attended by Turkish Vice President Fuat Oktay, who said in an interview on Thursday, Ankara was willing to discuss a two-state solution.

In his statements, Oktay said the ‘Turks of Cyprus’ made it clear in the recent elections they could accept a bicommunal solution based on political equality.

Tatar also received an invitation to visit Turkey from President Tayyip Erdogan.  He will go to Ankara on October 26 for the first visit, which is a tradition of every Turkish Cypriot leader.

They will discuss relations and the Cyprus problem.