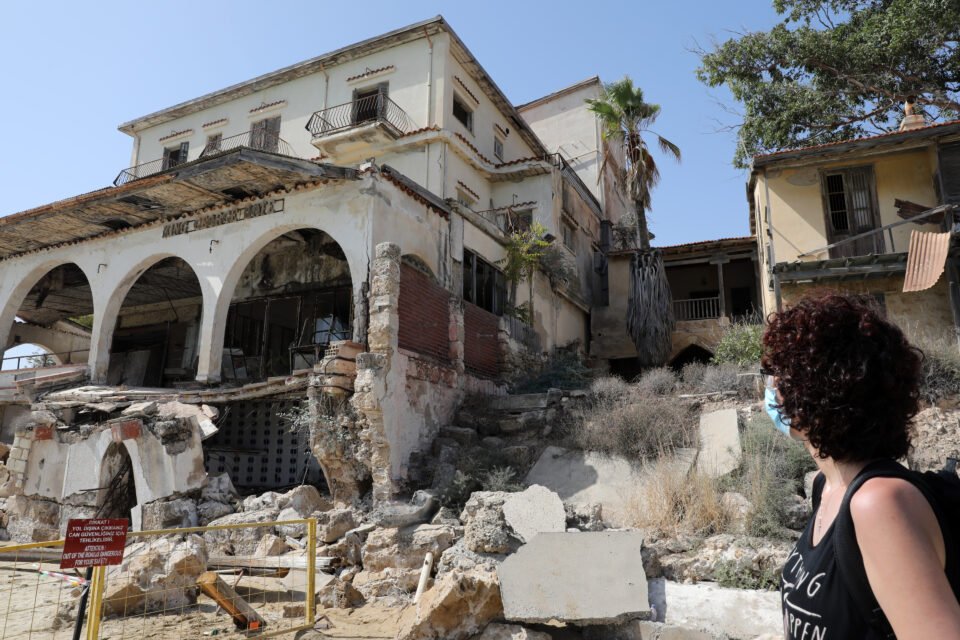 An abandoned quarter of Varosha

As the Turkish side pushes to open the fenced off area of Famagusta, the Republic looks set to be reduced to its usual  reactive role

For all the talk of ‘mobilising’ the international community against the Turkish side’s growing encroachment into Varosha, the government seems to lack any real plan to wriggle out of what’s arguably a checkmate move by Ankara, analysts tell the Sunday Mail.

What’s more, Turkey’s maneuver in inviting Greek Cypriot refugees to claim their properties in Varosha via the Immovable Property Commission (IPC) and live there under Turkish Cypriot administration has the bonus of splitting Greek Cypriots on the matter – music to the ears of foreign policy strategists in Ankara.

Asked whether the Cypriot government has any blueprint to deal with the escalating situation in Varosha, one former diplomat, who preferred not to be named, summed it up thus: “A plan to do what? Talk to God?”

He added: “The government has no plan, because it cannot have one, simple as that. Anything and everything that can be said about Varosha by the EU or the UN Security Council, has been said.

The source said there are just two avenues for Cyprus – the EU and the UN Security Council. But both these avenues have been tried countless times, yielding no concrete results except for verbal, generic expressions of support to Cyprus and the need to uphold international law.

“In the real world, there’s nothing left for these institutions to do. The EU has exhausted all means to exert pressure on Turkey, and even that pressure has been half-hearted, as the track record shows.”

As for the UNSC, the former diplomat wonders what more it has to offer. Will they convene a special session for Cyprus about the Varosha issue? And then what? More verbiage? Would they even bother to convene a session?

On President Nicos Anastasiades’ letter to US President Joe Biden to pull Turkey’s ear, so to speak, the source opined this would likewise go nowhere.

“It’s doubtful whether Biden will even get to read that letter. The president of the United States has dozens and dozens of items to go through on his desk every day. Important matters, from Ukraine to nuclear arms control, you name it. The letter from Anastasiades probably lands at the bottom of the pile.

“So both Anastasiades and his foreign minister Christodoulides can wax on about how they’re pulling strings and so forth, but at the end of the day it amounts to theatrics for domestic public consumption.”

The source stressed that power politics is the name of the game, and right now Turkish leader Tayyip Erdogan has all the cards. If Erdogan, due to visit Varosha on July 20, feels confident enough to make a move on Varosha, he will. The Greek Cypriot side, as usual, gets reduced to a reactive role.

“You asked what the Cypriot government’s plan is? Well in a way they do have one – it’s a public relations management plan.”

If the government can do nothing, except sit and watch and invoke UNSC resolutions, what does that entail?

Reality takes over, says the source. It will be up to the individual – Varosha refugees – to act according to their conscience. Do they apply to the IPC for restitution of property or compensation, or do they heed the government’s guidance and wait for a Cyprus settlement?

“I think quite a few might take recourse with the IPC. Maybe, say, five per cent to begin with. Remember, there’s a great deal of frustration out there among refugees, many of whom are giving up on a comprehensive solution to the Cyprus issue. I’m not saying they should or shouldn’t go to the IPC – I’m saying reality will take its course, pragmatically speaking.”

As for Turkey, the source thinks Ankara will play it by ear. It will be gauging the response of Greek Cypriot refugees to the offer to live under Turkish Cypriot administration and, depending on that feedback, will take it from there.

“Ultimately, UN resolutions, declarations, or what not, on the ground Turkey controls Varosha,” the source offered.

Just days ago, Turkish Cypriot leader Ersin Tatar said that to date 344 people have laid claims over properties in Varosha through the IPC.

The IPC was set up by Turkey in 2005 as the domestic remedy – ranging from restitution of property, to compensation to exchange – for claims relating to Greek Cypriot properties in the north and was accepted as such by the European Court of Human Rights in 2010.

The commission’s mandate expires on December 21 this year. Some, like attorney Achilleas Demetriades, warn that if the mandate is not renewed, and Greek Cypriot refugees do nothing by that cutoff date, the Turkish side might counter that refugees had 15 years to apply and failed to do so, thus waiving their right to any remedy.

Hubert Faustmann, Professor of History and Political Science at the University of Nicosia, agrees that Ankara holds the keys to the mansion, as it were.

“Cyprus has the law on its side, but not the power And we expect that of a small country. As to what plan the government here has, well, it’s the same ‘plan’ as always – protest to international fora. It hasn’t worked in the past, nor will it now.”

“As usual, Turkey is being extremely smart. On the one hand, the Varosha situation is extremely offensive to Greek Cypriots on the island, but on the other hand it’s not a big deal to the international community.

“Think about it: Turkey says that Greek Cypriots may return to Varosha if they like. On the surface, how can you argue against that? In a sort of twisted way, it does makes sense. Of course, what they’re really doing, is saying to Greek Cypriots ‘look we took your properties, and now we’re giving them back, how generous of us, right?’

“But these twists of irony are lost on foreign diplomats and powerbrokers, most of whom don’t know – or perhaps aren’t interested – in the minutiae of the Cyprus issue.”

Moreover, if refugees do go to live in Varosha, this would serve to defuse the longstanding Greek Cypriot argument that UN resolutions call for the fenced-off area of Famagusta to be returned to either the Greek Cypriot side or under UN administration.

“But if Greeks return there, the Turkish side will point to that and say ‘See, they’re coming here on their own, they themselves don’t mind living under Turkish Cypriot administration’. And for the Cypriot government, that’s its worst nightmare come true.”

The analyst also thinks ahead, to what happens should Greek Cypriot refugees take Turkey up on her offer.

“It depends how they’ll play it. Will the IPC offer restitution for Varosha properties, or compensation? And what happens when a Greek Cypriot settles in Varosha? Clearly they’d be subject to Turkish Cypriot law, pay taxes, the whole nine yards.

“Meantime the rest, the reluctant segment, will be closely watching the fate of those who do go back. If they see, for example, that returning Greek Cypriots are being treated fairly, more might be encouraged to follow in their tracks.”

What might prompt Greek Cypriot refugees to live in Varosha under Turkish Cypriot administration?

A combination of factors, says Faustmann. Both for sentimental and monetary reasons – and the two aren’t mutually exclusive.

“Perhaps for those advanced in age, sentimentality plays a big part. For younger generations, with no emotional attachment to the north, it’s different.”

Show me the money! In Europe, it’s in Germany, France and Russia