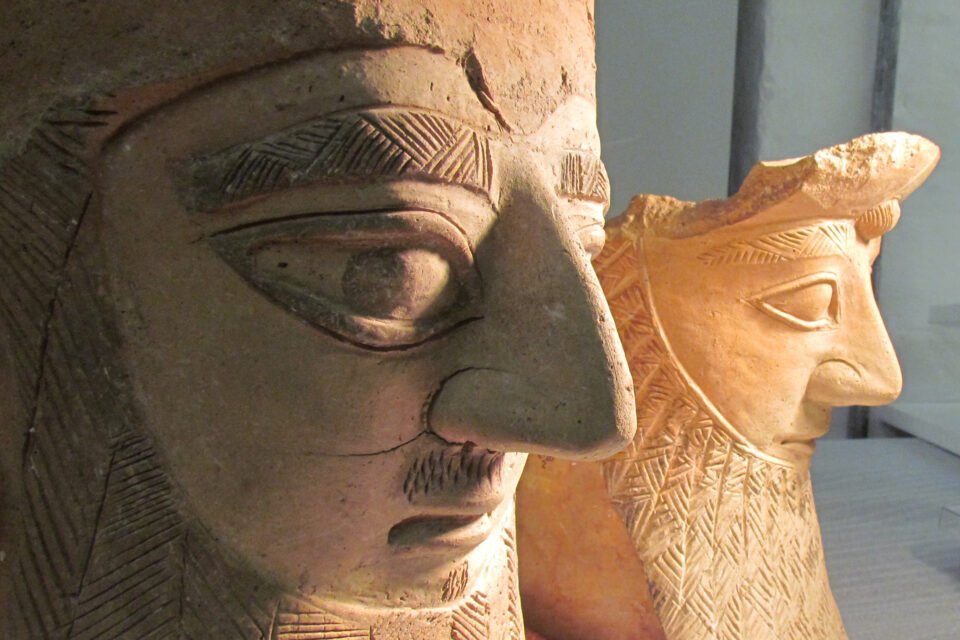 Treasures from the sanctuary at Frangissa are on display in London and Toronto, but its exact location remained a mystery until last year.  Annette Chrysostomou speaks to one very excited archaeologist who headed the team that rediscovered it

Imagine having the chance to explore a sanctuary which existed in the 7th century BC, a site which housed colossal statues and important terracotta figures, and which then lay forgotten for more than 130 years after it was first excavated.

Archaeologists who rediscovered the Sanctuary of the Apollo of Frangissa near the ancient kingdom of Tamassos last year jumped at such a chance and carried out some preliminary excavations at the site in the Nicosia district in October. They now fear more excavations, which they hoped would yield important findings, will not be possible in the near future.

“We had hoped to be able to continue with the excavations from mid-March, but of course the situation cannot be planned at all at the moment due to the pandemic. We may have to postpone the campaign – but it will definitely continue and bring exciting new results!” Dr Matthias Recke from the University of Frankfurt, one of the project leaders, told the Sunday Mail.

The Sanctuary of Apollo at Frangissa, with its wealth of sculptures, was subject to a ‘rescue’ operation in 1885 by the German archaeologist Max Ohnefalsch-Richter. Most of the finds were taken to museums abroad although some, including the famous Colossus of Tamassos, are in the Cyprus Museum in Nicosia.

This important sanctuary was then forgotten for more than a century.

The project leader explained why.

“There are several reasons why this important sanctuary and its sensational finds have been forgotten. One reason is that the excavator of 1885, Max Ohnefalsch-Richter, wanted to publish the finds himself because of their great importance and therefore hardly revealed any information until his book was published. However, since he was in permanent financial trouble and found no time to continue his research, this book never appeared. At his death in 1917, only an incomplete manuscript was available, which could not be published in this form. For me and my research, however, this is important material.”

The site of the shrine itself fell into oblivion because the area was filled in again after the end of the excavations, which were carried out very hastily and within a few days. The landowner at the time had stipulated this by contract, as he wanted to use the area for agriculture.

“Interest in archaeology was not so widespread at that time, and no one thought of preserving the ruins as a tourist monument, for example,” Recke explained.

In addition, a law was still applied at that time that stipulated the division of the finds: one third of the finds went to the museum in Nicosia, another third was due to the excavator, and the third to the landowner.

“Usually, however, the farmers were paid off and sold their share to the excavator. These finds could then be legally taken out of the country. This also happened in our case, and so some statues were already exhibited at the great World’s Fair (‘Colonial Exhibition’) in London the year after the excavation,” he said. “These pieces were then loaned to the British Museum and later acquired by the museum, which is why they are in London today. In the museum’s catalogue, however, they were described as “from Tamassos”, so that the connection with the Frangissa site was also forgotten.”

Meanwhile, a large quantity of finds was shipped to Canada and remained there unpacked in transport crates until they were identified in the 1980s by the German archaeologist and excavator of Tamassos, Professor Dr Hans-Günter Buchholz in the Toronto Museum.

“So little information was known over the years. It was clear that the sanctuary had yielded significant finds, but it was no longer known where the sanctuary was located or where the finds were,” he said. “Even the finds that went to the Cyprus Museum in Nicosia in 1885 were forgotten because a new inventory did not document the sites and the statues with other finds from Cyprus were generally referred to as the ‘Old Collection’ without distinguishing between the different sites.”

That it was forgotten does not mean it is unimportant, the German archaeologist stressed.

To start with, Frangissa was in use for an exceptionally long time, for more than half a millennium, from seventh century BC.

Archaeologists believe its end must have been very sudden, because the statues were still standing upright around the altar when it was found, so that the excavator assumed it had been buried by a natural disaster, a landslide.

Not only terracotta figures have been found in Frangissa, and numerous statues made of limestone, but even statues made of marble – extremely rare for this early period in Cyprus.

“Marble does not occur in Cyprus, so it has to be imported. There are also several inscriptions in Frangissa, also on marble, which show that Phoenicians from Kition, today’s Larnaca, came here as votaries.”

They were probably traders who came from Tamassos to Frangissa because of the rich ore mines – the copper mines are only two kilometres away from there.

“Because of these Phoenician inscriptions from Frangissa, we know not only that the Greek god Apollo was identified with the Phoenician god Resheph, but also that the name Alasia, as Cyprus was called in the Bronze Age, has been preserved here. For the Apollo of Frangissa was called ‘Apollo Alasiotas’.”

Among the finds from Frangissa are several statues that stand out because of their size and quality. These include the well-known Colossus of Tamassos, which is exhibited in the Cyprus museum, but only the torso, head and feet have been preserved.

“Through my research I have now been able to identify parts of the lower body and the left arm. This figure was almost four metres high and must have been seen from a great distance. In addition, a colossal stone sphinx came from this sanctuary, which is the largest stone figure of its kind from the archaic period in Cyprus [750-500 BC]. If, as was the case with comparable statues, it also stood on a high column, this too is a monument that achieved a powerful effect at a distance.”

Finds such as these raise questions about the sanctuary’s integration into the surrounding landscape and road connections to neighbouring towns, copper mines, and other considerations with which modern archaeology is concerned, questions the German archaeologist and his team are attempting to answer.

“Unfortunately, many Cypriot sanctuaries were excavated in the 19th century and are poorly documented. Here in Frangissa, however, there is the possibility of gaining further knowledge through a new investigation of this site, which has been irretrievably lost at other sites.”

There is some connection to the ancient kingdom of Tamassos, which is mentioned in Assyrian sources as early as the seventh century BC. Excavations at nearby Politiko have uncovered part of the city walls, several large buildings, a sanctuary of Aphrodite and a sanctuary of Cybele.

Most of the remains are very poorly preserved, with the exception of the royal tombs of Tamassos. This is where the sanctuary of Frangissa comes in, Recke pointed out.

“Though some rural sanctuaries of Tamassos were found, the only one that is really well preserved and has yielded such rich and meaningful finds is precisely the sanctuary of Frangissa.”

When the coronavirus pandemic finally allows excavations to continue, the universities of Frankfurt and Kiel, in collaboration with the University of Cyprus and the Cypriot antiquities department, plan to carry them out as part of a field school in order to give students of classical archeology an insight into practical field work with the most modern methods of digitisation and documentation. Technical support will be provided by research foundation Amricha, which will also oversee the conservation work of finds and architectural elements.

Amricha is an institute which aims to promote Cyprus studies and supports various important projects, such as the publication of a handbook on ancient Cypriot ceramics. This foundation is based in Leipzig and is the initiative of Alexander Malios, a German-Cypriot, who established the institute because of his feelings for his native Cyprus.