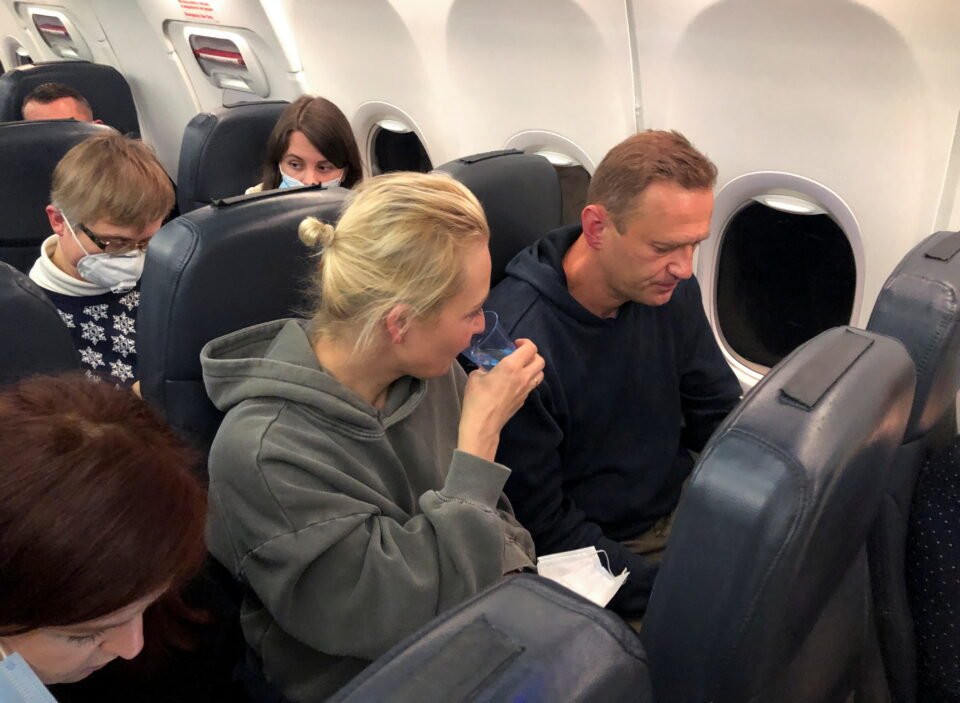 When Russian opposition leader Alexei Navalny returned to Moscow on Sunday after convalescing in Germany from an attempted poisoning by the FSB domestic spy agency, the regime-friendly media loyally failed to mention his arrival. With one striking exception: Vremya, the flagship news show of Russian state television.

Presumably somebody there was hoping to win favour with the Kremlin, because they briefly mentioned Navalny three-quarters of the way through Sunday’s two-hour programme. In fact, they compared Navalny’s trip home to Vladimir Lenin’s famous return to Russia in 1917, and suggested that he was as great a danger to Russia as Lenin had been.

As every Russian knows, the Germans plucked Lenin from exile in Switzerland in the middle of the First World War. He was sent across Germany in a ‘sealed train’ (so he wouldn’t spread the infection of Communism there) to St Petersburg, then in the throes of Russia’s first democratic revolution – and he did just what the Germans had hoped he would.

Lenin overthrew the fumbling democratic ‘Provisional Government’ in a military coup, took Russia out of the First World War – and launched a 73-year totalitarian Communist regime that cost at least 20 million Russian lives in purges, famines and lesser acts of repression. Is Navalny really that great a danger?

The ambitious presenter at Vremya probably won’t get the job he wanted, because President Vladimir Putin really won’t have liked seeing his noisiest critic compared in stature to Lenin, a genuine world-historical figure. Putin himself never mentions Navalny’s name at all.

Russians cannot even put a name to the system they live under, as the poor Vremya presenter’s confusion illustrates. It’s certainly not a democracy, although there are regular elections. It’s definitely not Communist, although most of the regime’s senior figures were Communists before they discovered a better route to power and wealth.

It’s not a monarchy, although Putin has been in power for 20 years and is surrounded by a court of extremely rich allies and cronies. And ‘kleptocracy’ is just a pejorative term used mostly by foreigners, although Navalny does habitually refer to Putin and his cronies as “crooks and thieves”.

In fact, Putin’s regime is not a system at all. Its only ideology is a traditional Russian nationalism that is lightweight compared to blood-and-soil religious and racist movements like Trump’s in the United States and Modi’s in India. It’s a purely personal regime, and it is very unlikely to survive his dethronement or demise.

Putin has been in power for20 years, and he has just changed the constitution with a referendum that lets him stay in power until 2036. But that seems unlikely, partly because he is already 68 and partly because the younger generation of Russians is getting restless and bored.

Navalny is a brave man who has gone home voluntarily to face a spell in Putin’s jails. (He missed two parole appointments for a suspended sentence on trumped-up embezzlement charges because he was in Germany recovering from the FSB assassination attempt.) But his role in Russian politics so far had been more gadfly than revolutionary.

His supporters do their homework and make clever, witty videos detailing the scandalous financial abuses of the regime (the latest is a virtual tour of Putin’s new $1 billion seaside palace on the Black Sea near Novorossiysk), but he is probably not the man who will finally take Putin down. What he is doing to great effect is mobilising the tech-savvy young.

Since 2018 the average age of protesters at anti-Putin demos, mostly linked to Navalny one way or another, has dropped by a decade, and their boldness has risen in proportion. Moreover, their attitude to the regime now verges on contempt. Rightly so: consider, for example, the last two assassination attempts by regime operatives.

In 2018 the GRU, the Russian military intelligence agency, sent two agents to England to kill defector Sergei Skripov and his daughter Yulia. The agents made two trips to Salisbury because they couldn’t find the right house, they were tracked by CCTV every step of the way, and in the end they left too little novichok (nerve poison) on the doorknob to kill the targets.

Equally crude and bumbling was the FSB’s attack on Navalny in Tomsk, where the novichok was put on his underpants. Once again, the target survived, and afterwards the investigative site Bellingcat was able to trace FSB agents tracking Navalny on 40 flights over several years before the murder was attempted.

Neither agency is fit for 21st-century service, nor is the regime they both serve. Russians have put up with it for a long time because they were exhausted and shamed by the wild political banditry of the 1990s, but Putin’s credit for having put an end to that has been exhausted. He may still be in power for years, but this is a regime on the skids.

Archbishop to testify before passports committee on Tuesday