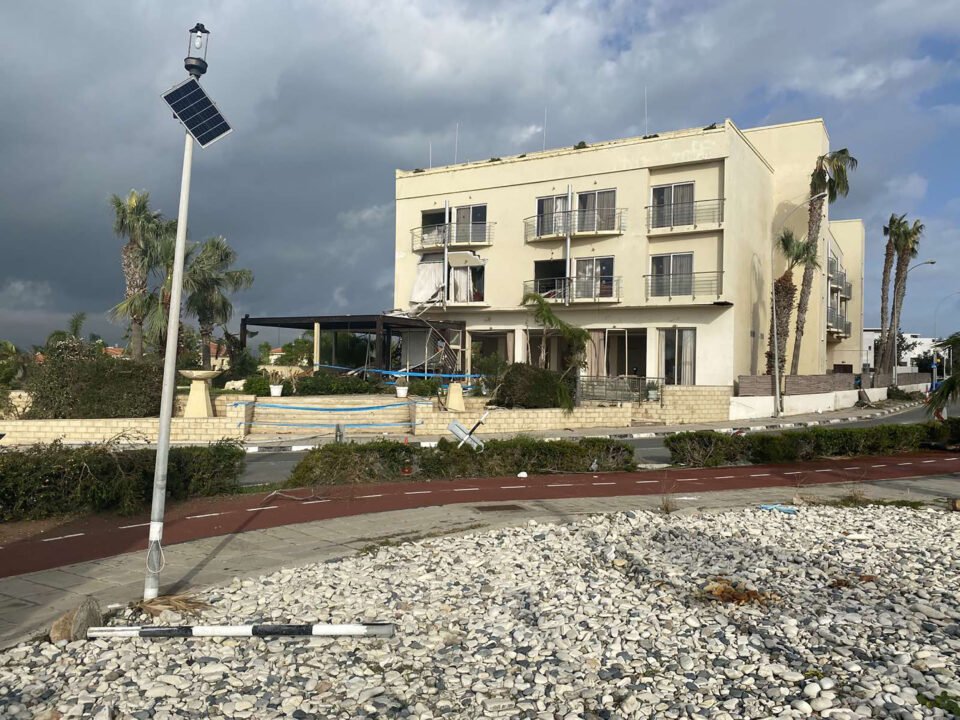 Damages after the weekend storm in Pervolia

Inspection of the destruction caused by stormy weather on Saturday night continue both in Pervolia, where houses and a hotel were damaged, and in agricultural areas in the Larnaca district, where farms were affected.

Storms hit many parts of Cyprus overnight on Saturday, causing damage to houses and a hotel in Pervolia.

The south side of the E-Hotel resort, which is closed due to the pandemic, suffered extensive damage, with windows broken, part of the wall on the balcony of an apartment collapsing and fences and gates flattened.

“District administration crews went to the Pervolia community yesterday and recorded the damage to a hotel and 25 houses. Today the crews will visit the area again and will record the damage to another 20 houses,” Larnaca district official Odysseas Hadjistefanou explained.

“The district administration crews will visit two municipalities and three communities in the Larnaca district which were damaged by the extreme weather phenomena of last Saturday. They will visit the municipalities of Athienou and Lefkara and the communities of Skarinou, Kalavasos and Mazotos where homeowners have informed us that the strong winds have blown water tanks from the roof tops.”

After the damage is recorded, a report will be prepared which will be sent to the interior ministry and then to the Council of Ministers, which will decide regarding compensation.

Meanwhile, officials from the agriculture department are busy recording the damage to livestock farms, vegetables and potato crops caused by the strong winds, heavy rains and frost during the weekend.

“From the initial information we have, damage was caused to two livestock farms in Tersefanou and in the area of ​​Maroni. Damage was also caused to vegetable cultivations in Kiti, Pervolia, Tersefanou, Ormidia and Xylofagou,” senior officer of the department Makis Antoniades said on Tuesday.

He added “potato crops were also damaged in Xylofagou, Ormidia, Kiti and Pervolia. Officials of the department of agriculture will tour the east of the Larnaca district today and tomorrow the western area to get a clearer picture regarding the damage.”

After this, the farmers who have sustained damages need to submit a claim to their local district office so an assessment can be made.

Beneficiaries of compensation are those who have paid their contribution to the agricultural fund, Antoniades said.