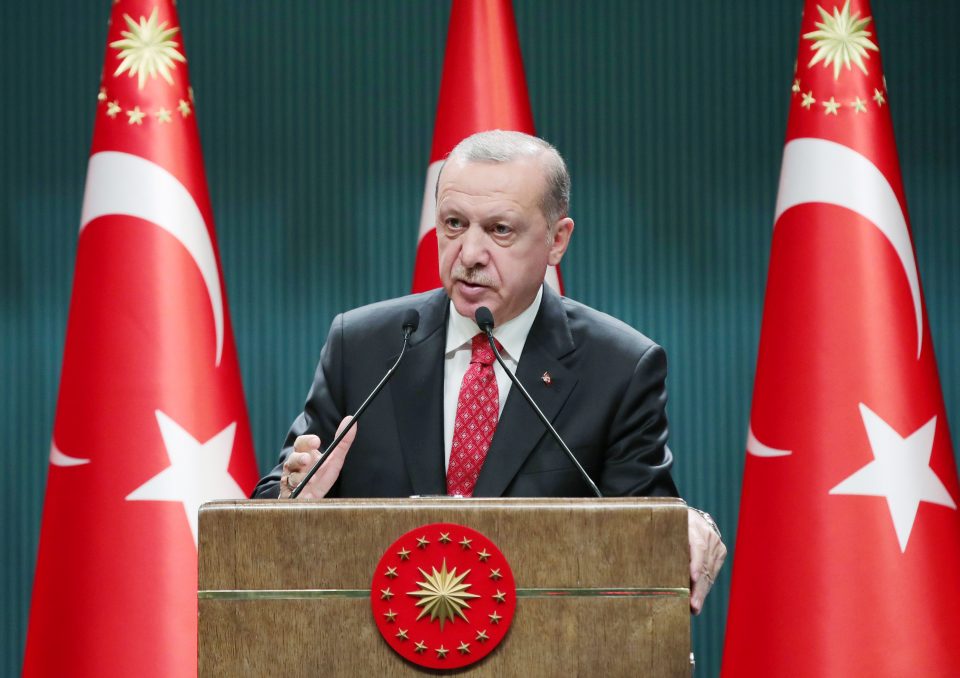 Turkish President Tayyip Erdogan said on Wednesday there was no other solution to the Cyprus issue but a two-state solution.

He also said that whether Greece accepts it or not, Cyprus talks would not include a solution based on federation.

On Monday President Nicos Anastasiades and Greek Prime Minister Kyriakos Mitsotakis said they would only accept a settlement based on UN resolutions, rejecting the two-state solution supported by Turkey and Turkish Cypriots.

According to Reuters, Erdogan told lawmakers from his AK Party he could not meet Mitsotakis despite a resumption of talks between the two Nato members over their maritime disputes. Erdogan said Mitsotakis had “challenged” him, and he called on the Greek premier to “know his limit”. He accused the Greek PM of kicking the table over and walking away.

Erdogan said the statements by Greece and the Cyprus government showed they were disregarding Turkish Cypriot authorities, adding that there was no point discussing proposals that failed before.

“There is no longer any solution but a two-state solution. Whether you accept it or not, there is no federation anymore,” he told lawmakers.” Only under these conditions can we sit at the table over Cyprus. Otherwise, everyone should go their own way.”

In his speech, Erdogan said that former UN chief, the late Kofi Annan told him that he had “tried four times and failed” to achieve a Cyprus solution.

The Turkish president then announced that his vice president Fuat Oktay would be in Cyprus on Thursday “to start work”.

“The Cyprus issue must be discussed with a solution-focused approach. The only issue that can be discussed is the two states. We believe that we can build the future where peace will prevail on the island by taking lessons from the past without being overshadowed by the past,” he added. “Everyone should know that we will no longer allow the Turkish Cypriots to be the victims of a non-solution that has been going on for half a century.”

There has been no Greek Cypriot reaction yet to Erdogan’s comments, which come at a time when a five-party conference is in the works to find a way forward on the Cyprus issue.

However, reports on Tuesday indicated that the place and date of the conference, which the UN secretary-general intends to convene, remain uncertain. The reports, citing informed sources said Nicosia fears that Ankara is playing “games” with the date ahead of a European Council meeting set to discuss EU-Turkey relations.

According to previous information, the informal conference was scheduled for early March, but this no longer seems feasible.

A diplomatic source told CNA that the place and date of the five-party conference have not been set yet, but it seems impossible at this stage that the conference will take place in early March, in New York.

There are difficulties, due to existing measures to curb the spread of Covid-19 and “possibly due to games Turkey is playing”, the same source said.

There are serious reasons why Nicosia fears that Turkey is playing games with the date, both in relation to the European Council in March, as well as due to broader geopolitical relations, the diplomatic source added, saying that all these factors cause uncertainty as to the final outcome.

Turkish Cypriot leader Ersin Tatar also commented on Wednesday in a written statement saying the comments made on Monday by Anastasiades and Mitsotakis showed that their mentality had not changed even as efforts were being made to organise the conference on Cyprus.

“Turkey’s guarantees and the presence of the Turkish army in Cyprus are the greatest security and the red line of the Turkish Cypriot people,” Tatar said, reiterating that they would never relinquish either.

While UN chief Antonio Guterres has said recently he is open to new ideas other than a bizonal, bicommunal federation as the basis for new talks if both parties have another common vision for the future. The EU has clearly stated it will not accept Cyprus being divided into two countries.

On Wednesday, the third guarantor power, Britain said it remains a “strong supporter” of a settlement based on the internationally accepted model of a bizonal, bicommunal federation, according to a government source in London, CNA reported.

“We still think that is the best thing,” the source said.

Reclaiming our natural state of health and wholeness – Sadhguru (Cyprus)