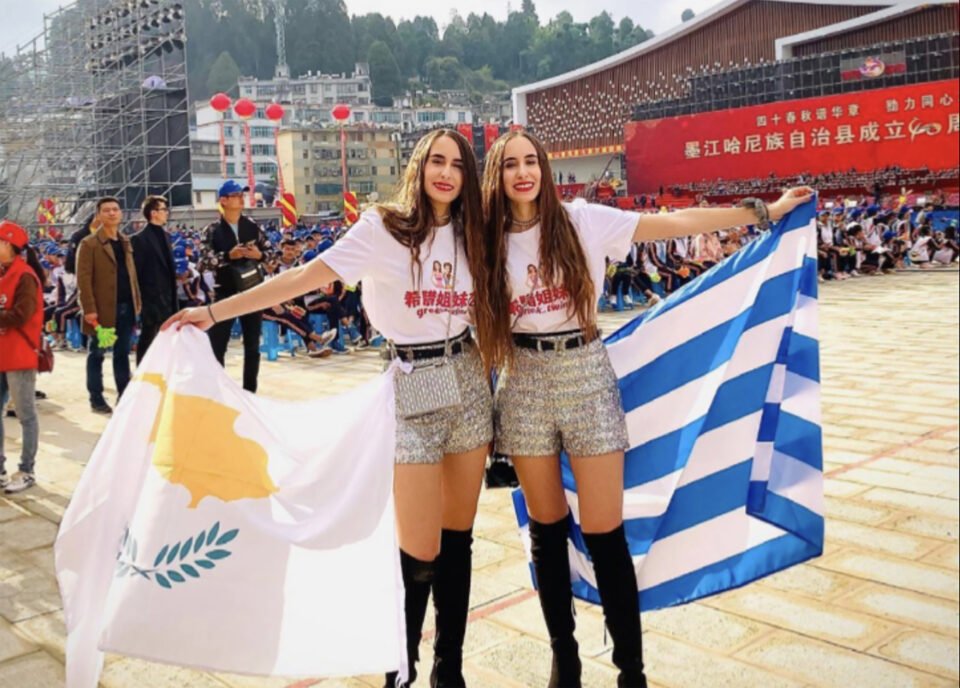 Twin sisters and influencers Marianna and Sofia Erotokritou, 25, from Limassol, have been honoured by Greece for promoting Greek tourism in China through social media.

The two sisters, who have been living in China since 2013, were appointed in January as ambassadors for Greek tourism by Greece’s Tourism Minister Harry Theoharis for promoting the country in the Chinese market.

The Erotokritous told the Cyprus News Agency on Saturday that they moved to China to learn the language and to study at the University of International Business and Economics in Peking.

There, they started uploading short videos on Chinese social media, with topics related to the culture, tourism, and gastronomy of Greece and Cyprus.

“From the first day we arrived in the country, we realised that there is a huge knowledge gap about Greece and Cyprus,” the sisters told CNA. They added that at their first university in Nanjing in southwest China, they were the first Greek-speaking women to ever enrol. “So, we decided to create some videos so that the Chinese can learn about Greece and Cyprus.” The videos were in Chinese language, “because very few speak English”.

Gradually, they said, their work on Chinese social media began to gain in popularity and they are now known as the ‘Greek twins’ and gained a reputation as online influencers.

After their videos on Athens and Santorini exceeded one million views, the Greek tourism ministry decided to award them the title ‘Ambassadors of Greek Tourism’.

“In the modern world of social networks, @greek_twins as influencers with hundreds of thousands of followers on social media in China, will play a decisive role, by creating authentic videos with everyday moments from Greece and the lifestyle of its residents,” the Greek tourism ministry said.

But the sisters have also received distinctions from Cyprus in the past for promoting the island in China.

In 2017, at an event held in Greece, they received a distinction for the promotion of Hellenism in China, an award delivered to them by President Nicos Anastasiades.

Their most recent work about Cyprus includes a video on the invasion, entitled “The Wounds Remain Open.”

“We uploaded this video last year and in it we explained the historical events and the conditions that prevail today with the division and the pseudo-state,” they told CNA.

Speaking about the strong impact of their work on Chinese social networks, the Erotokritou sisters explained that the Chinese people really like to see foreigners speak Chinese.

“So, first they liked that we spoke their language and secondly that we introduced them to some places they did not know,” they said. The videos, they said, also contained some historical and cultural issues that they had never heard of.

The twin sisters also deliver online Greek language courses which have been attended by dozens of Chinese people, they said.

Regarding their distinction as ‘Ambassadors of Greek Tourism’, with a duration of two years and the possibility of renewal, the sisters said that this year is the Year of Culture and Tourism of Greece – China. This distinction gives them the opportunity to officially represent Greece in a series of events while their videos will be used on the platforms of the Greek Tourism Organisation and Greece’s embassy in China.

The sisters say there is significant room for increasing the number of Chinese tourists visiting Greece and Cyprus, but they clarified that the Chinese want to visit a country to see sights and are interested in the history of a place. Good shopping is also a magnet, but they are not the kind of tourists to just sit on the beach to sunbathe, they said.