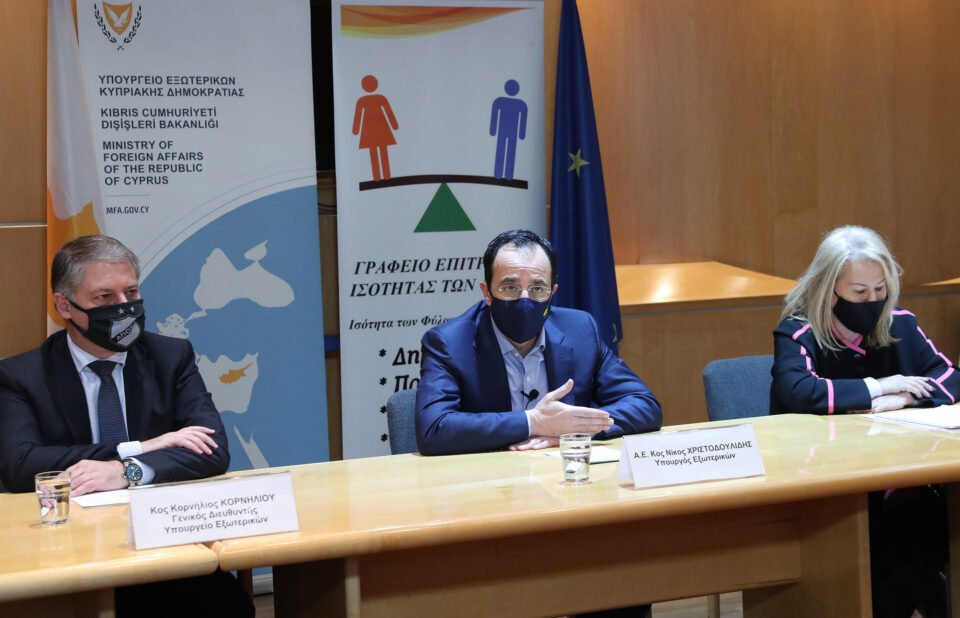 Minister of Foreign Affairs Nikos Christodoulides, at the virtual presentation of the National Action Plan 2021-2025 for “Women, Peace and Security” (PIO)

Cyprus to increase number of women in leading positions for peace and security as part of the country’s first national action plan for women.

A plan to promote the role of women in conflict prevention and resolution as well as in peacebuilding was implemented on Thursday. The plan implements the United Nations Resolution on Women, Peace and Security and covers the period 2021 to 2025.

She highlighted the great importance of resolution for an occupied Cyprus as women experienced violence and rape during the Turkish invasion.

“Peace and security are our common responsibility, men and women, together we must put the issues of equality, security and peace high on our priorities because they concern everyone,” Antoniou said.

Actions include promoting more women to leading positions in peace and security at the foreign ministry and in international organisations, official at the Office of Gender Equality Commissioner, Andri Savva, said while presenting the plan.

The implementing body of the plan is the foreign ministry and other ministries working together in cooperation with the gender equality commissioner’s office. A committee will be set for the monitoring and evaluation of the plan for as long as that is in force. The committee will be meeting every six months.

Introducing the action plan, the minister said it is an integral part and an important tool of the foreign policy of the country.

It consists of four pillars that involve the enhancement of the participation of women in political decision-making; the protection of women and girls from gender-based violence including rape during armed warfare; conflict prevention which includes gender violence as well as sexual exploitation and abuse of women and girls during war; and to promote the resolution and to raise awareness among the general public with emphasis on rural areas.

He added that the aim of such actions was to build and strengthen cooperation with other countries at regional and European level.

As an example of the actions, the minister referred to the active and institutionalised participation of Cyprus in the design of policies related to gender equality at an EU and UN level, as well as the substantial and systematic participation in international discussions and conferences on the subject, proving in practice, as he said, the commitment of Cyprus to the promotion of equality.

The foreign ministry also implements and supports a number of programmes and actions related to the rights of women and girls in neighbouring countries such as Jordan, Lebanon and Palestine, he added.

Christodoulides also referred to a future cooperation with the relevant Norwegian Ministry in September aimed at exchanging actions and practices in relation to the implementation of the Resolution. In addition, talks are underway with the Spanish foreign ministry, he said, to plan actions concerning the promotion of the rights of women and girls.

The action plan is running in parallel with the framework for incorporating the gender dimension in foreign policy for the years 2019-2023.

Our View: Scientific data does not support minister’s alarmism