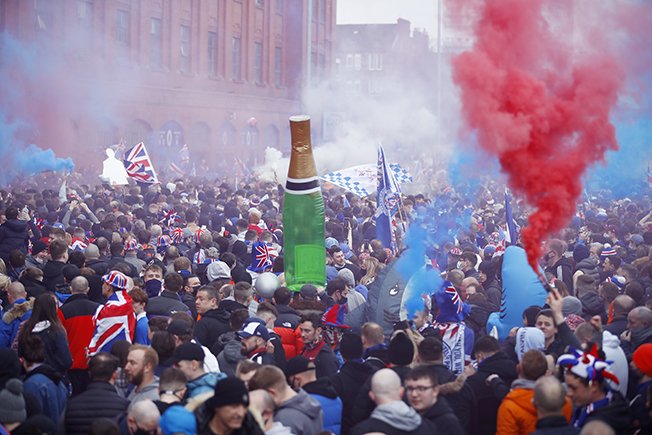 Rangers celebrated their first league triumph since 2011 after Celtic were frustrated by Dundee United in a 0-0 Premiership draw on Sunday to hand their bitter Glasgow rivals the title.

Rangers fans had flouted COVID-19 lockdown restrictions to gather outside Ibrox before and after Saturday’s 3-0 win over St Mirren which moved the team to within a point of the title and Celtic needed a win to delay their celebrations.

But despite Celtic dominating possession and having more than 25 shots during the game, the visitors were unable to find a way past a determined United side.

Steve Gerrard’s Rangers have 88 points from 32 matches — 20 points more than Celtic — and have claimed a 55th league title, taking them four ahead of the total won by their neighbours.

Six minutes into Sunday’s match, Rangers fans flew a banner over Tannadice Park that read ‘Can you see us now?! #55 titles’ and United ground staff later had to douse flames after some individuals threw flares into the stadium.

The title success is especially sweet for Rangers, who spiralled into financial turmoil and were demoted to Scotland’s bottom tier in 2012 after entering administration.

With former Liverpool and England midfielder Gerrard in charge, however, the Glasgow side have ended Celtic’s grip on the league crown that has stretched back for nine seasons.

“Delighted for Gerrard and all his team. Celtic have had a period of dominance, which has been… uncomfortable for us Rangers supporters,” former Rangers player and manager Graeme Souness told Sky Sports.

“They thoroughly deserve it. They’ve been fantastic all season and I just wish I was in Glasgow right now.”

Rangers fans gathered outside Ibrox again on Sunday and let off flares and fireworks at the club’s Govan base, prompting Scotland’s Justice Minister Humza Yousaf to ask them to remain at home and not risk spreading the novel coronavirus.

Later, large crowds also congregated at George Square in Glasgow’s city centre in violation of lockdown rules to let off red, white and blue flares despite pleas from First Minister Nicola Sturgeon and the police.

Celtic boss Neil Lennon stepped down earlier in a dismal campaign in which their hopes of a 10th consecutive league title faded in the face of relentless pressure from Rangers, who have scored 77 goals and conceded only nine all season.

“Even though Rangers haven’t kicked a ball today, it’s their day,” former Celtic goalkeeper Pat Bonner told the BBC. “To only lose nine goals, it doesn’t matter what league you’re in, that’s a fantastic piece of work.

“There is no bonus for Celtic, even if they win the Scottish Cup this year. They’ve thrown away an almighty chance to make history by winning 10 titles in a row.”

The two teams will clash in an “Old Firm Derby” on March 21.