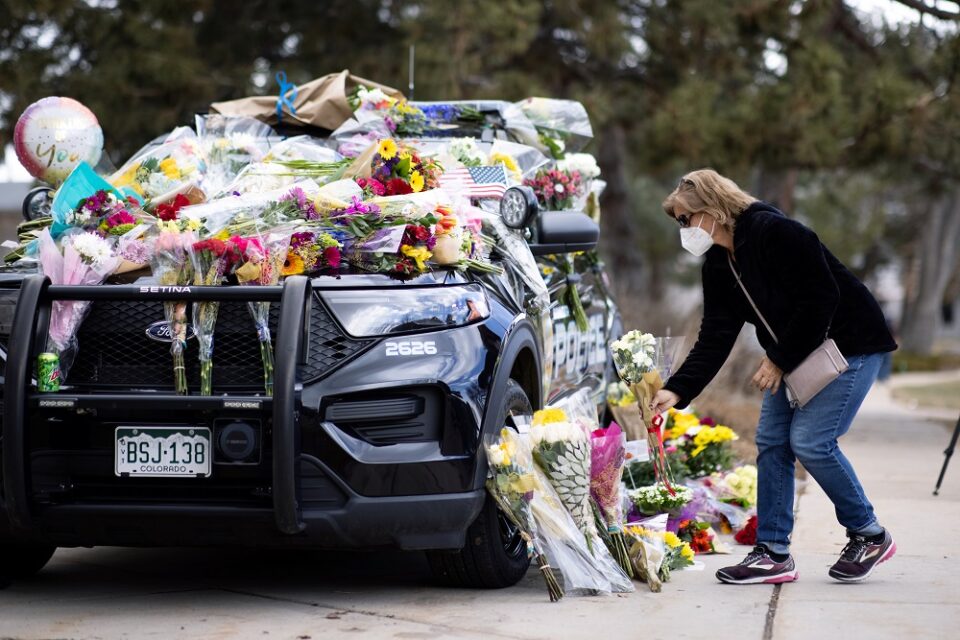 By Alexandra Ulmer and Brad Brooks

For Teri Leiker, 51, the King Soopers grocery store in Boulder, Colorado, was a happy place. She worked there for some 30 years and was dating a colleague.

On Monday, she along with nine other people died when a gunman opened fire at the store in Boulder, Colorado.

Among the victims was a motorcycle fan who was a gun rights supporter and a man who had just walked his daughter down the aisle. Another was a young repairman whose church said his Bosnian Serb parents had fled war in Bosnia in the 1990s for the United States.

The dead were remembered on Tuesday, a day after the shooting, by friends, families and colleagues in social media posts and interviews. Makeshift memorials sprung up for them around Boulder. Nationally, flags were lowered to half-staff.

Leiker’s friend Lexi Knutson said her job made her happy.

“She loved going to work and enjoyed everything about being there,” Knutson told Reuters. “Her boyfriend and her had been good friends and began dating in the fall of 2019. He was working yesterday too. He is alive.”

Knuston said Leiker had an intellectual disability and that she thought her job had come through a special needs work program.

The 10 victims ranged in age from 20 to 65 and included Eric Talley, an 11-year veteran of the Boulder police force. Talley, 51, was the father of seven children and had recently been looking for a less dangerous job, according to a statement released by his father.

Denny Stong, 20, was the youngest victim.

Earlier this month, Stong asked via Facebook that his friends honor his birthday by making a donation to the National Foundation for Gun Rights, whose website says it works “to expand pro-gun precedents and defend gun owners.”

“I’ve chosen this nonprofit because their mission means a lot to me,” he wrote. “I hope you’ll consider contributing as a way to celebrate with me.”

On his Facebook page, Stong said he was a fan of planes, bikes and motorcycles. In a nod to coronavirus-induced lockdowns, he’d framed his profile picture with the words “I can’t stay home, I am a Grocery Store Worker.”

Neven Stanisic, 23, worked as a repairman and had been called in to fix a Starbucks coffee machine, said the Rev. Radovan Petrovic of the St. John the Baptist Serbian Orthodox Church in Lakewood, Colorado, who knows Stanisic’s family well.

He repaired the machine and was about to leave for another job when the shooter gunned him down in the parking lot, Petrovic reported that police recounted. His fate was decided in mere seconds, he said.

Stanisic’s Bosnian Serb parents fled war in Bosnia in the 1990s, the deadliest conflict in Europe since World War Two, and came to the United States as refugees, according to Petrovic.

“They avoided one tragedy by coming here, but now this tragedy struck them,” Petrovic said.

Rikki Olds, 25, whose Facebook page was full of pictures of rivers, mountains and waterfalls, as well as selfies with her boyfriend, worked at the store.

“We were kind of the silly ones always,” former colleague Sogol Nasiri, 27, recounted.

“Working at King Soopers is really sometimes stressful, but we always had jokes, dancing around, being silly,” said Nasiri, who met Olds when they both worked in the deli department of King Soopers in Louisville, Colorado in 2016, before Olds transferred to the Boulder location.

Nasiri recalled an incident typical of her fun-loving personality. Olds once cut eye holes out of a box, put it over her head and danced around the store, she said.

Kevin Mahoney’s daughter, Erika, posted a photo on Twitter of the 61-year-old looking moved as he walked her down the aisle at her wedding last summer.

“My dad represents all things Love,” Erika Mahoney wrote, noting that she is now pregnant and that she knows her dad “wants me to be strong for his granddaughter.”

“I love you forever Dad,” she wrote. “You are always with me.”