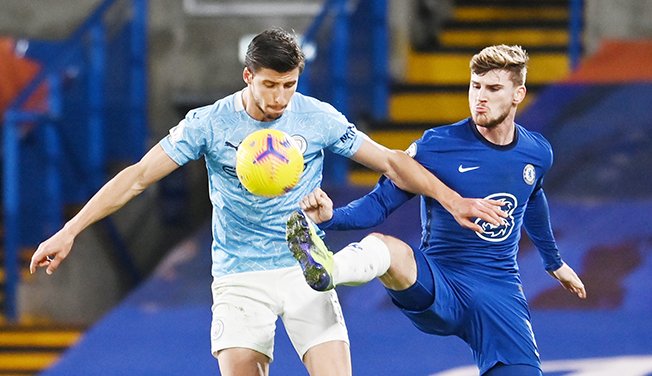 While the Premier League title is now a formality for City, the Chelsea game takes on extra significance after the two clubs earned their places in the May 29 Champions League final in Istanbul

Manchester City will be crowned Premier League champions if they beat Chelsea on Saturday in a game which is now a dress rehearsal for the Champions League final.

Victory at the Etihad Stadium would allow Pep Guardiola’s City side to open up an insurmountable 16-point lead over second-placed Manchester United, who have just five matches remaining.

But while the title is now a formality for City, the Chelsea game takes on extra significance after the two clubs earned their places in the May 29th Champions League final in Istanbul.

City were hugely impressive in a 2-0 win over Paris St Germain on Tuesday which secured a 4-1 aggregate victory and their first ever place in Europe’s biggest club game.

Chelsea comfortably dealt with Real Madrid on Wednesday with a 2-0 victory at Stamford Bridge setting up the all-English final.

German coach Thomas Tuchel has had an extraordinary impact on Chelsea since joining the club three months ago and can also look forward to an FA Cup final against Leicester City on May 15.

The West London club reached that final by beating Manchester City in the semi-final and that result is fresh in Tuchel’s mind.

“This doesn’t give us the upper hand but it gives us a good feeling, it gives us self-confidence,” said Tuchel, who has described City as the benchmark for his team.

“We wanted to close the gap to Manchester City and in this one match in the semi-final we did in a very impressive performance, and we will need exactly the same level of performance again. But it gave us belief,” he said.

Chelsea also have plenty to play for on Saturday as they look to secure a top-four finish and guarantee a place in next season’s Champions League.

Tuchel’s side are currently in fourth place but have just a three-point advantage over fifth placed West Ham United.

On Sunday, Manchester United start a run of three games in five days, with a trip to Aston Villa.

Ole Gunnar Solskjaer’s side have a crammed fixture list next week after violent fan protests forced the postponement of last Sunday’s match with Liverpool.