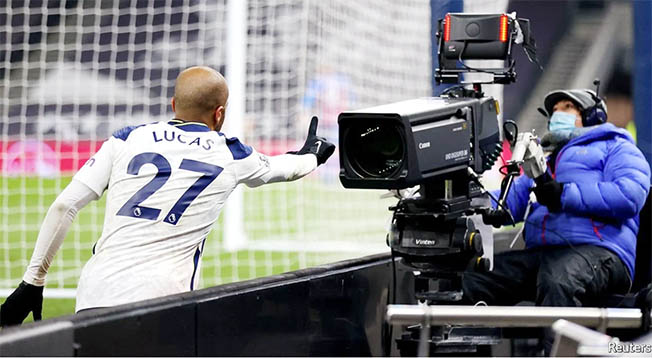 Sky Sports, BT Sport, Amazon Prime Video and BBC Sport have agreed a proposal to continue their existing television deal with the Premier League for a further three years

Premier League clubs have unanimously agreed on a three-year renewal of the league’s UK live and non-live broadcast deals with Sky Sports, BT Sport, Amazon Prime Video and BBC Sport, avoiding an auction process that might have cost them money.

The league said the renewed deals for the 2022-23 to 2024-25 seasons would be concluded at the same overall value as the current arrangements, reported to be worth 4.5 billion pounds ($6.3 billion).

Skipping the auction will be a relief to the league as revenues from football’s domestic broadcast rights deals were expected to fall across Europe’s top leagues this year due to a lack of competition between broadcasters.

“It will provide much needed financial certainty to all parties. Overall, the winner remains the Premier League and the clubs,” said Paolo Pescatore, an analyst at PP Foresight.

But he added that some would feel hard done by, such as the online sport broadcaster DAZN, which has reportedly been interested in buying BT Sport.

“This will be a huge blow to DAZN, who is keen to add the crown jewels of UK sports broadcasting rights to its fledgling service. The outcome puts BT in a far stronger position in forging a strategic deal with DAZN,” he said.

The league said it had received government approval to renew its broadcast rights with existing partners instead of holding a competitive auction due to the financial impact of the COVID-19 pandemic.

“We are hugely appreciative of the government agreeing in principle to allow this arrangement,” said Premier League chief executive Richard Masters.

“COVID-19 has had a significant impact on football, and renewals with our UK broadcast partners will reduce uncertainty, generate stability and promote confidence within the football pyramid.”

The new rights deals will include an additional 100 million pounds in funding over the next four years that will go to teams in the lower leagues of English football. Pescatore said this agreement was likely key in getting the overall deal done.

“The additional amount is a drop in the ocean compared to the billions secured for the next Premier League cycle,” he added.

The value of the Premier League’s domestic broadcast rights had come down in 2018 from a high of 5.1 billion pounds over three years to 4.5 billion pounds for the current 2019-2022 cycle.

British media reported that the domestic broadcast rights valuation could have fallen by a further 500 million to 900 million pounds in an open auction.

“This increased funding from the Premier League will provide vital support for local football clubs and facilities across the country,” the FA’s chief executive Mark Bullingham said.

BT Sport said the deal would allow it to show 52 games exclusively live every season.

“All eyes will now be on the overseas rights and whether the Premier League can maintain or increase the value as per last time,” said Pescatore.