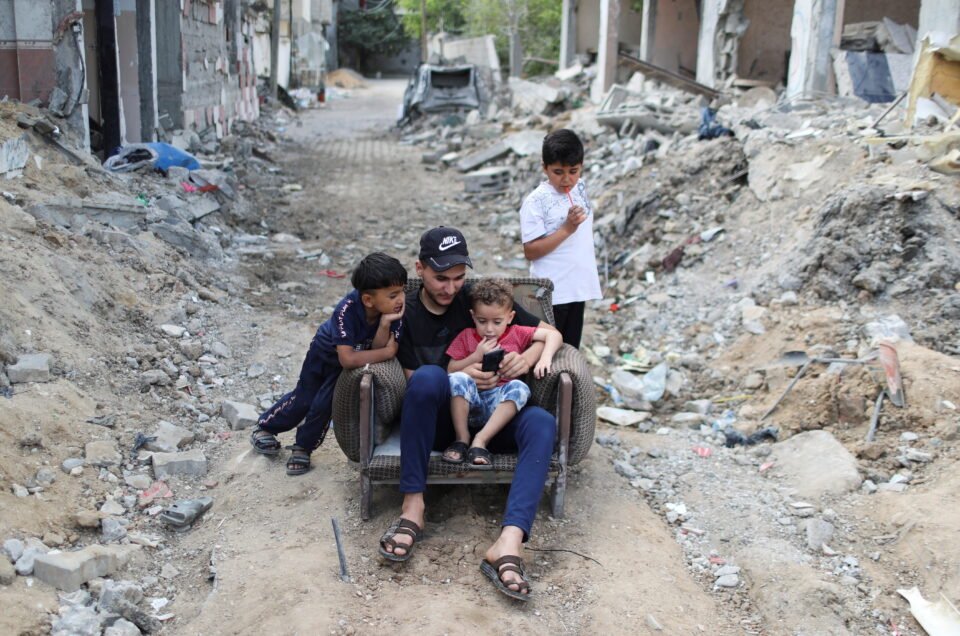 Palestinians sit on chair amid the rubble of their houses which were destroyed by Israeli air strikes during the Israel-Hamas fighting in Gaza May 23, 2021. REUTERS/Mohammed Salem

A ceasefire between Israel and Hamas held into a third day on Sunday as mediators spoke to all sides about extending the period of calm after the worst outbreak of fighting in years.

Egyptian mediators have been shuttling between Israel and the Gaza Strip, which is ruled by Hamas, to try to sustain the ceasefire and have also met the Islamist group’s rival, Palestinian President Mahmoud Abbas, in the occupied West Bank.

Lynn Hastings, the United Nations Humanitarian Coordinator for the Palestinian territories, said on Sunday the U.N. would launch an appeal to repair the damage in densely populated Gaza, where there is a threat of COVID-19 spreading.

“The escalation has exacerbated an already dire humanitarian situation in Gaza, generated by nearly 14 years of blockade and internal political divisions, alongside recurrent hostilities,” she said in a statement issued from the Palestinian enclave.

“We must also ensure support to continue addressing needs that already existed, including those arising from the ongoing pandemic.”

U.S. President Joe Biden has said Washington will work with U.N. agencies on expediting humanitarian aid for Gaza “in a manner that does not permit Hamas to simply restock its military arsenal”.

Israel has blockaded Gaza since 2007, saying this prevents Hamas bringing in arms. Hastings said the United Nations had long been asking Israel to stop the blockade and would continue doing so.

Palestinian officials put reconstruction costs at tens of millions of dollars in Gaza, where medical officials said that 248 people were killed during the 11 days of fighting.

Medics said rocket fire and a guided missile attack killed 13 people in Israel during the hostilities.

Economists said Israel’s recovery from the COVID-19 pandemic could be curbed by the hostilities. Israel reopened its borders to foreign tourists on Sunday but said it would take time to revive the tourism industry.

Israel has fully vaccinated about 55% of its population and COVID-19 cases have dropped sharply.

Israel admitted Jewish visitors on Sunday to a contested Jerusalem holy site where police confrontations with Palestinian protesters helped to ignite the cross-border Gaza fighting on May 10.

Police said this was a regular scheduled visit to the sacred compound known as Temple Mount by Jews and the Noble Sanctuary by Muslims. Israeli social media accounts showed a few dozen Jews in religious garb strolling around the site under guard and police reported no unusual incidents.

The hilltop plateau in Jerusalem’s walled Old City is the most sensitive site in the conflict, and was the focus of frequent protests by Palestinians during the Muslim holy month of Ramadan.

The holiest site in Judaism, it is revered by Jews as the site of the Biblical temples of antiquity. It is now dominated by two Muslim shrines, the Dome of the Rock and al-Aqsa Mosque, which is the third-holiest site in Islam.

It is situated in East Jerusalem, which Israel captured and occupied in a 1967 war, later annexing in a move not recognised internationally.

Palestinians seek East Jerusalem, including the Old City, as the capital of a future state. But Israel deems all of Jerusalem to be its capital, citing religious and historical ties.