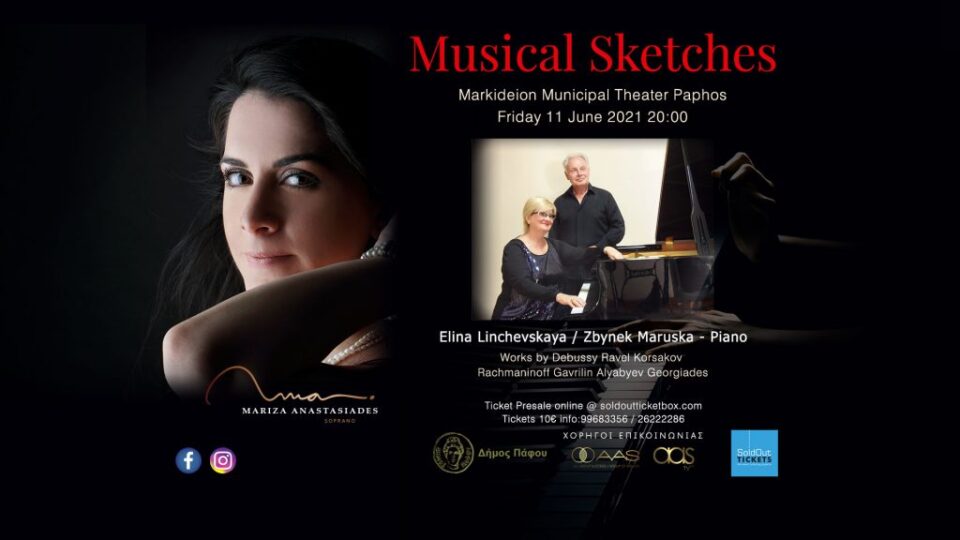 Two pianists and one soprano will take to the Markideion stage in Paphos on Friday to present Musical Sketches, a varied programme of classical music masterpieces composed by prominent French, Czech, Russian and Greek composers.

Acclaimed Cypriot soprano Mariza Anastasiades will be joined by pianists Elina Linchevskaya and Zbynek Maruska to perform a vocal and pianistic programme featuring music by Ravel, Debussy, Fauré, Rimsky Korsakov, Rachmaninov, Gavrilin and Georgiades. Outstanding songs with emotionally charged melodies will come to life with their enchanting rhythms and breath-taking lyricism, all sung in the original language by the soprano.

Four-hand piano arrangements of Debussy’s most popular music including the Petit Suite and the universally loved Claire de Lune will be performed. Also on the programme is an arrangement of Gavrilin’s dance sketches from his beautiful ballet Anyuta. To round off the musical sketches, the artists choose works of folkloric idiom such as Ravel’s five Greek Songs and Georgiades’ Greek Suite.

Anastasiades from a very young age has taken part in specialised masterclasses on vocal techniques, interpretation aspects, with conductors, opera singers and vocal coaches. Since then, she has collaborated with orchestras and conductors from the Metropolitan Opera New York and the Varna International Orchestra, where she sang the role of Lauretta from Gianni Schicchi 2019.

The two pianists, Russian Linchevskaya and Czech Zbynek Maruska, originate from the same generation of performers who came through the disciplined and structured musical education that was traditionally taught and made their countries famous. The common aspects of their artistic careers as well as character traits were essential ingredients for the creation of a close and fruitful cooperation between them, that has led to the setting up of a chamber music group, which aims to demonstrate the completeness in expression and fullness of sound of the pianoforte, and at the same time offer the music-loving public the pleasure of enjoying worthy musical presentations.

For Friday’s concert, the two pianists are forming another ensemble with Mariza to bring a Paphos audience a classical masterpieces.

Lake Soros at risk from lead contamination due to hunting