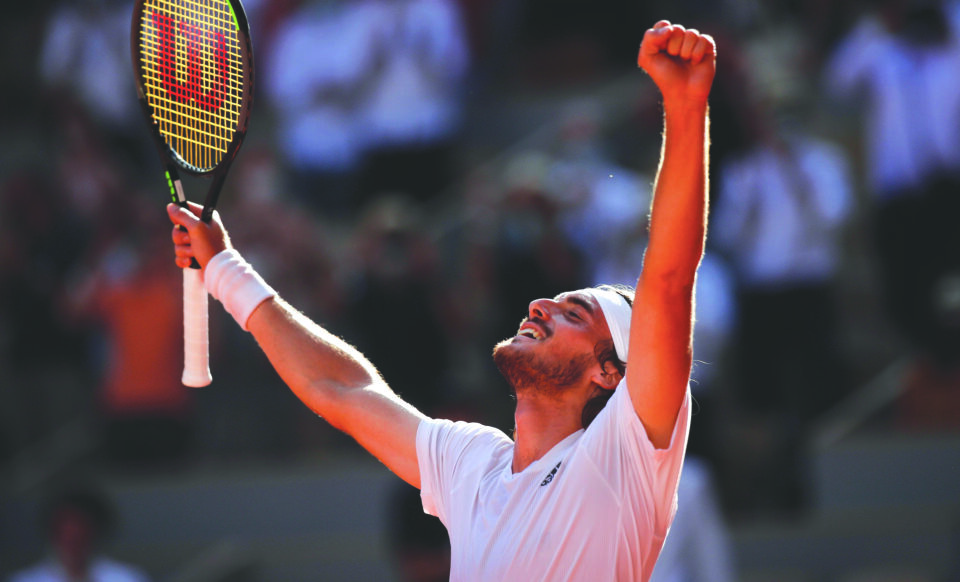 Tsitsipas, 22, has long been marked out as a future Grand Slam champion and has already added the ATP Finals and a Masters 1000 trophy to his cabinet.

But he drew a blank all three times he reached the last-four stage at a major before Friday’s semi-final.

He arrived for the contest with a 5-2 head-to-head record against sixth seed Zverev and a Tour-leading win tally in 2021 but had to toil hard and dig himself out of trouble on numerous occasions to finally taste victory after three hours and 37 minutes.

The win over the 24-year-old German made Tsitsipas the first Greek to reach the final of a Grand Slam.

“All I can think of is my roots,” an emotional Tsitsipas, trying hard to hold back tears, said on a sun-bathed Philippe Chatrier court.

“I come from a really small place outside of Athens. My dream was to play here and I would never have thought I would achieve it …”

Tsitsipas got an early break in the opening set, aided by two double faults from Zverev, and remained solid against the German’s heavy groundstrokes to hold onto his narrow advantage.

Zverev continued to be aggressive and built a 3-0 lead at the start of the second set but Tsitsipas showed exemplary athleticism and staunch defence to win the next six games, leaving a bewildered Zverev staring at his player’s box.

The German, however, regrouped, loosened up and added more power to his shots to pick up early breaks in the third and fourth sets which proved enough for him to level the match at two sets apiece.

Before the start of the deciding set, Tsitsipas went off the court for a lengthy break to change his clothing, fully aware that he needed to switch tactics to nullify Zverev’s big serves and raw power.

But he found himself 0-40 down in his first service game and an agitated signal from his father and coach, Apostolos, to go for his shots seemed to wake him up.

Tsitsipas found an extra gear and went on the offensive to win the next five point to hold and then got the crucial break of Zverev’s serve in the fourth game.

“It was nerve-wracking and so intense in the first game of the deciding set,” said Tsitsipas. “I came back and I stayed alive. I still felt that there was hope and a chance to fight back. The only thing I could do is fight.

“It was very emotional and this wins means a lot. It’s the most important one of my career so far.”

Zverev, who had won all seven five-set matches he had contested at Roland Garros before Friday, saved four match points on his serve to keep Tsitsipas waiting before the Greek sealed the contest on the next one with his eighth ace.

Either top seed Novak Djokovic or 13-time Roland Garros champion Rafa Nadal, who contest their semi-final later on Friday, stand in the way of Tsitsipas and a first Grand Slam title on Sunday.