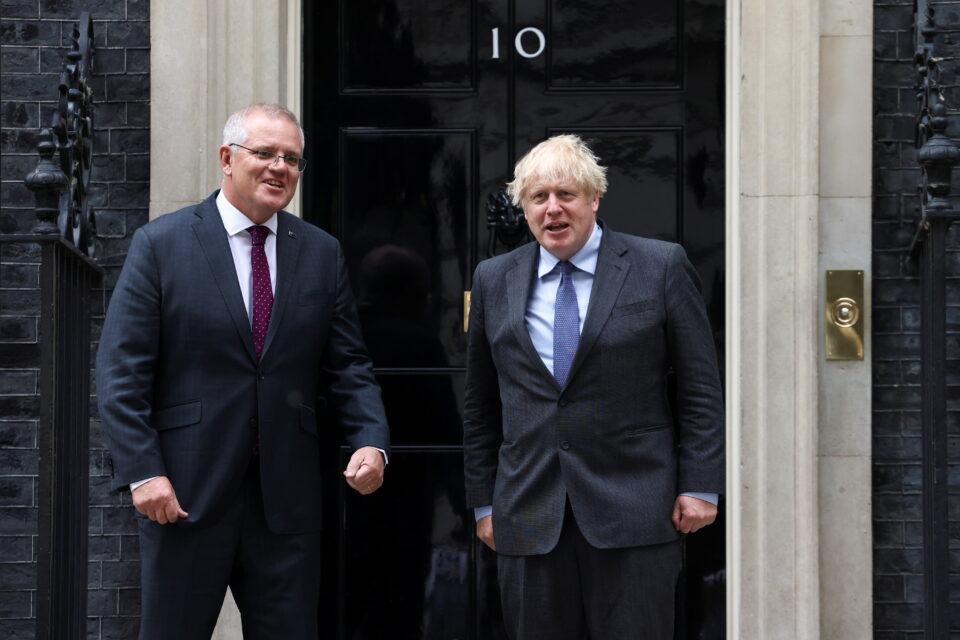 Australian Prime Minister Scott Morrison and his British counterpart Boris Johnson overcame sticking points during talks after the Group of Seven meeting in Britain over the weekend, June 14, 2021. REUTERS/Henry Nicholls

Britain and Australia have agreed a trade deal after talks between their prime ministers ironed out outstanding issues, Australian Minister for Trade Dan Tehan said on Tuesday.

The agreement will be Britain’s first trade deal since Brexit, and comes as London seeks to expand commercial and diplomatic links in the Indo-Pacific region.

Australian Prime Minister Scott Morrison and his British counterpart Boris Johnson overcame sticking points during talks after the Group of Seven meeting in Britain over the weekend, which Morrison had attended as a guest.

“Both prime ministers have held a positive meeting in London overnight and have resolved outstanding issues” in relation to the trade pact, Tehan said in a statement.

Britain is Australia’s eighth-largest trading partner, with two-way trade worth A$26.9 billion ($20.7 billion). Prior to Britain joining the then European common market in 1973, Britain was Australia’s most lucrative trading market.

A formal announcement would be made later on Tuesday, Tehan said.

The deal will be keenly scrutinised by British farmers, who fear they could be forced out of business if the deal eliminates tariffs on lamb and beef imports from Australia.

Australian Minister for Trade David Littleproud declined to reveal specifics but said Australian farmers would benefit from the deal.

“Overall, this is going to be a great win for Australian agriculture,” Littleproud told 4BC Radio

Though details have still to emerge, some official estimates say the agreement could add 500 million pounds ($705.7 million) to British economic output over the long term.

For Australia, however, analysts questioned the importance for an economy already focused on Asia.

The childhood journey to developing empathy