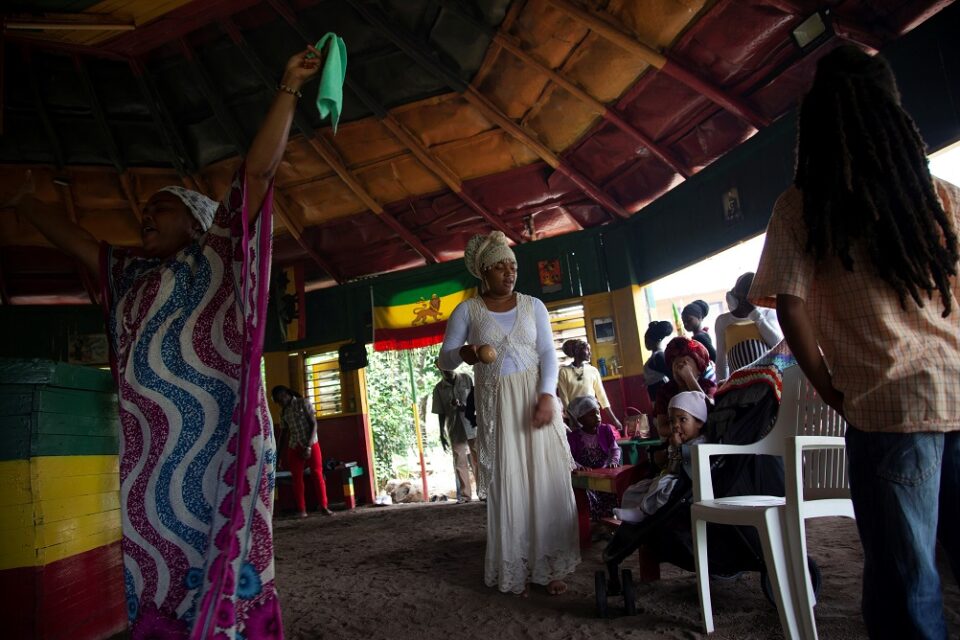 Members of a Rastafari farming community celebrate the Sabbath service, during Covid 19 pandemic in Blue Mountains, near Kingston. REUTERS/Ina Sotirova

By Kate Chappell and Ina Sotirova

At a Rastafari farming community high up in the hills above Jamaica’s capital, dreadlocked locals gather at the temple to worship and celebrate with Bible readings and traditional drumming and chanting. No COVID-19 protocols are in place.

This isolated community of around 100 people called the School of Vision has so far escaped the ravages of the pandemic. They credit traditional medicine, like root wine and herbs such as neem, bitterwood and ginger, for helping fend off the virus, and do not want to take the vaccine.

Jamaica has reported around 16,800 infections and 350 deaths per 1 million people, according to statistics compiled by Reuters – lower than many other countries in the region.

But lockdowns to keep the spread in check have taken a toll on the economy, and in particular on the tourism on which the Caribbean island relies, and authorities are keen to secure and roll out vaccines to return to normality.

One challenge they face is scepticism of vaccines, which is widely shared among Jamaica’s Rastafari, who tend to distrust Western medicine and institutions, partly due to a long history of racial injustice.

“There is some danger in (the vaccines) and that is why I am not taking it and not encouraging it,” Dermot Fagon, 66, the dreadlocked priest of the School of Vision, told Reuters. He said he feared it would allow authorities to track people via a microchip, a conspiracy theory that has spread in other parts of the world, too.

Although the School of Vision itself is small and fringe, Rastafari – who account for around 5-10% of Jamaica’s nearly 3 million inhabitants – have an outsized influence on society.

Prominent Rastafari reggae and dancehall artists like Spragga Benz and Cocoa Tea have voiced skepticism about the COVID-19 vaccines, influencing their large followings on social media.

Only 32% of Jamaicans said they would take a COVID-19 vaccine, according to a recently published Gallup poll – one of the highest vaccine hesitancy rates worldwide and far below the around 60-70% that World Health Organization experts have estimated is needed to achieve herd immunity.

Jamaica’s government is aware of the Rastafari community’s doubts, and prepared for the reality that not every Jamaican would take the vaccine, Health Ministry Permanent Secretary Dunstan Bryan told Reuters.

“Herd immunity can be achieved without having all those populations vaccinated,” he said.

The Rastafari movement developed in Jamaica in the 1930s after a prophecy that a Black man would be crowned king in Africa and Haile Selassie was subsequently made Ethiopian Emperor.

Fagon says he took to the mountains outside the capital Kingston years ago to avoid the ills of modern Western society, which Rastafari refer to as ‘Babylon,’ and live a more natural, harmonious life.

“We don’t like the synthetics,” Patrick Barrett, a popular reggae artist known as Tony Rebel, told Reuters, adding that food was his medicine. “I would prefer the natural order of things.”

Jahlani Niaah, a lecturer of Rastafari studies at the University of the West Indies, said “average Jamaicans have more skepticism” because of Rastafari mistrust. Other groups like evangelical churches are also advising against the vaccines.

Authorities have so far only fully vaccinated some 57,000 people – not even 2% of the population – as they have struggled to obtain the necessary supplies.

For some Rastafari, it’s all just a tall tale.

“It is a false alarm,” popular reggae artist Worin Shaw, 44, known as Jah Bouks, told Reuters. “They are fabricating a lot of things, government and scientists. It is a money-making thing you know.”