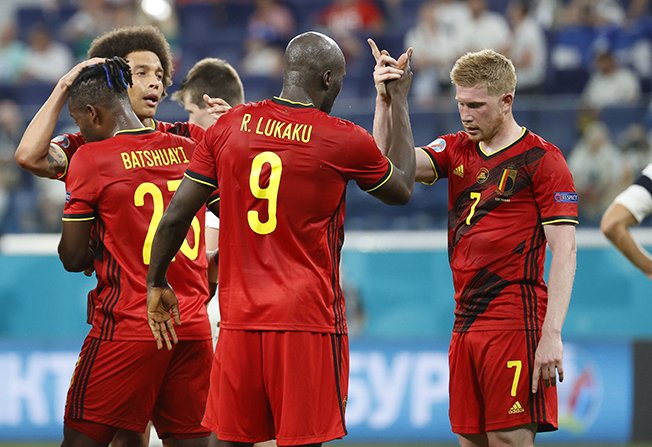 Belgium (above) and Italy, two of the favourites to win the tournament, go head-to-head in Munich on Friday night

Belgium have no intention of playing a cagey defensive game when they meet Italy in Friday’s European Championship quarter-final (10pm), but expect there will be times in the match when they will be pinned back, coach Roberto Martinez said in the build-up to the clash.

The Belgians showed both sides of their game in eliminating holders Portugal in Sunday’s last-16 tie in Seville, attacking with a quick passing game to score the only goal but having to deal with heavy pressure from the physical Portuguese.

“They are very well structured and have a real understanding of what each player’s role is. It is going to be a game where the two teams’ approaches are going to be similar. We’ll have to defend well.”

However, Belgium would not look to sit back and counter-attack themselves, the coach insisted.
“There is no chance of that, given the talent we have that wants to be on the ball. But at a tournament like this there are moments where you suffer and you must make sure then that you don’t concede.

“But the DNA of the Belgian national team will never change. We are a team that wants to be in possession, we want to be an attacking threat and we want to show the talent that we have to win games. But sometimes to win games you have to show another side that allows you to win,” he added.

Martinez admitted he was an admirer of the Italian side. “They have been unbeaten for 31 games and you don’t do that unless you are a very, very good team.

“It’s a challenge we look forward to. We showed against Portugal we can face up to the very best.”
Italy go into the clash facing their first real test of the tournament so far, up against the top-ranked national team according to Fifa.

While Roberto Mancini’s side have impressed so far in the European Championships, stretching their record unbeaten run, midfielder Jorginho is wary of how tough Friday will be.

“We are aware there isn’t room for mistakes. It would be wrong to think we have already achieved something important,” he said.

“We need to work more and more. We are on the right path, we need to grit our teeth and we are doing it. We must respect the first team in the ranking, but everybody has weak points.”

Jorginho also said team glory is more important than any push to win a surprise Ballon d’Or award for the best player in world football after a team-mate said he deserved it.

Speaking after Italy reached the quarter finals with a 2-1 victory over Austria on Saturday, forward Lorenzo Insigne highlighted the 29-year-old Jorginho’s importance to the Azzurri, adamant he should be considered for the accolade.

But Jorginho, who was at the heart of the Chelsea team that won the Champions League last month, insisted no such personal focus comes into his mind.

“I don’t think about it,” he said at Italy’s training base, when asked about the Ballon d’Or. “Everything that is happening is the consequence of hard work.

“My priority is the group and celebrating together with my team-mates and friends. This is more beautiful than celebrating alone,” he added at a news conference.

Medvedev pushing for return to top of world rankings