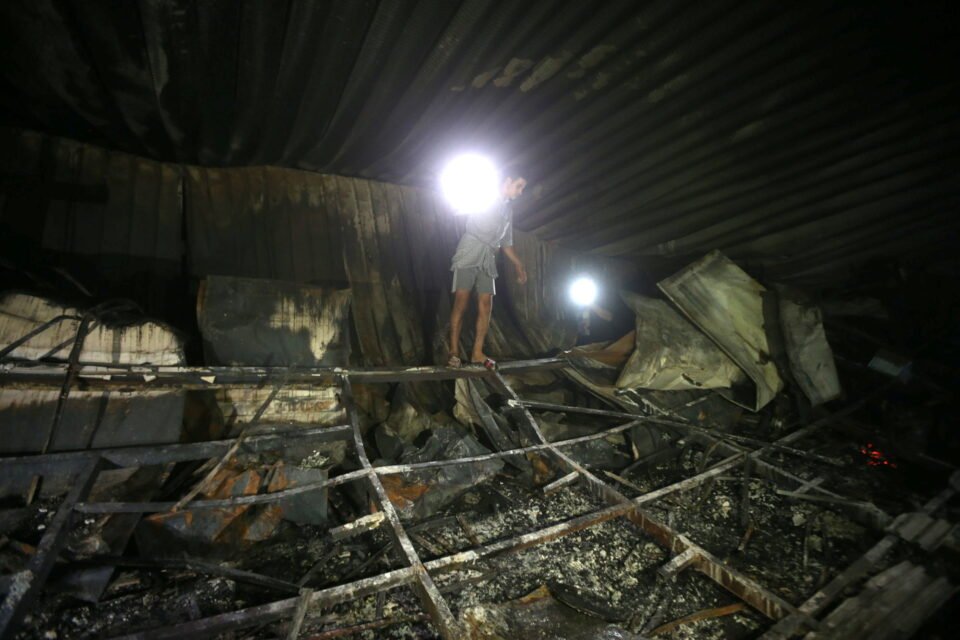 A man inspects the damage at the site where a fire broke out at al-Hussain coronavirus hospital, in Nassiriya, Iraq, July 13, 2021. REUTERS/Essam al-Sudani

At least 44 people were killed and over 67 injured in a fire likely caused by an oxygen tank explosion at a coronavirus hospital in Iraq‘s southern city of Nassiriya, health officials and police said on Monday.

As rescuers combed the smoke-charred building in search of more bodies, Prime Minister Mustafa al-Kadhimi held urgent meetings with senior ministers and ordered the suspension and arrest of health and civil defense managers in Nassiriya, his office said in a statement.

The manager of the hospital was also suspended and ordered to be arrested, the statement added.

Already decimated by war and sanctions, Iraq‘s healthcare system has struggled to cope with the coronavirus crisis, which has killed 17,592 people and infected more than 1.4 million.

“Health crews carried charred bodies out of the burning hospital while many patients were coughing from the rising smoke,” a Reuters reporter at the site of the fire said.

Health officials at Nassiriya said search operations at the al-Hussain coronavirus hospital were continuing after the fire was brought under control, but thick smoke was making it difficult to enter some of the burnt wards.

“Raging fires have trapped many patients inside the coronavirus ward and rescue teams are struggling to reach them,” a health worker told Reuters before entering the burning building.

Initial police reports suggested that an oxygen tank explosion inside the hospital’s COVID-19 wards was the likely cause of the fire, a policeman at the scene of the fire said.

“I heard a big explosion inside the coronavirus wards and then fire had erupted very quickly,” said Ali Muhsin, a hospital guard who was helping carrying wounded patients away from fires.

In April, a fire caused by an oxygen tank explosion at a COVID-19 hospital in Baghdad killed at least 82 people and injured 110 others.

Health sources said earlier the death toll from Monday’s fire could rise as many patients were still missing. Two health workers were among the dead, they said.

Angry relatives gathered in front of the hospital and clashed with police, setting fire to two police vehicles, a Reuters witness said.

Weary of political violence, Iraqis also suffer frequent accidents due to under-investment, corruption and wrecked infrastructure. During the coronavirus crisis, hospitals have struggled with an influx of patients and short supplies.

“Corrupt officials must be held accountable for the fire and killing innocent patients. Where is my father’s body,” said one young man as he searched among charred bodies wrapped in blankets in the hospital’s yard.

Meanwhile part of a hotel collapsed in the Chinese city of Suzhou killing eight people and rescue workers were searching on Tuesday for nine people missing in the ruins, state media reported.

The collapse of part of the Siji Kaiyuan Hotel in the coastal city happened on Monday afternoon. The Ministry of Emergency Management sent a team to help with the rescue work, media reported.

The cause of the collapse was under investigation, the Xinhua news agency reported. It published photographs of rescue workers combing through rubble in the search for survivors.

The Siji Kaiyuan is a budget hotel that opened in 2018. The part that collapsed was three storeys tall while an online booking site said the hotel had 54 rooms.

Ryanair to hire 2,000 pilots for new fleet of Boeings