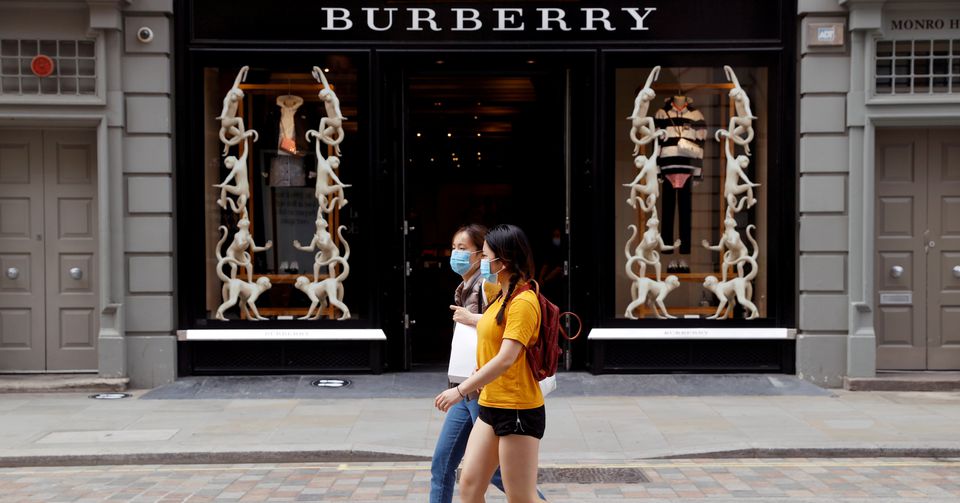 The 165-year-old group said on Friday retail revenue for the 13 weeks to June 26 rose 86 per cent to 479 million pounds ($662 million), with comparable store sales rising 90 per cent on the same period last year and 1 per cent ahead of the period two years ago.

Gobbetti, who has sought to elevate Burberry in the luxury sector, is returning home to Italy to lead Ferragamo (SFER.MI), the two companies said last month. The news sent Burberry’s shares tumbling 10 per cent.

Chief Financial Officer Julie Brown said Gobbetti’s announcement had come as a surprise, but it was “very much a personal decision”.

Riccardo Tisci, the designer who Gobbetti brought in to revitalise the brand, remained committed, she told reporters. Investors had feared he could follow the CEO out of the door.

“(Tisci) remains very excited by the opportunity to continue to inspire our customers with his imprint on Burberry’s identity, reinforced by the response to his latest collection,” she said. “We’re very, very confident of Riccardo’s position.”

Brown said Gobbetti would remain until the end of 2021. She declined to say if she would apply to be his replacement.

Shares in Burberry reversed initial gains to trade down 4 per cent in early deals on Friday.

Citi said the update would normally be sufficient to reinforce investor sentiment on the turnaround, but uncertainty around senior management was likely to persist.

Burberry adds to evidence that luxury has rebounded from the pandemic. Cartier maker Richemont said on Friday its sales had more than doubled in the latest quarter.

In March, the brand faced calls for a consumer boycott in China related to Xinjiang cotton.

Brown said the issue had “relatively limited impact”, although she declined to confirm if Burberry was still a member of the Better Cotton Initiative, a group that promotes sustainable cotton production.

The Americas were a stand out in other markets, with comparable sales up 341 per cent on a year ago and 34 per cent up on two years ago, driven by a new and younger clientele.

Stores in Europe, however, continued to be hit by lockdowns and weaker tourist footfall, it said.

UK to keep quarantine rules for travellers from France