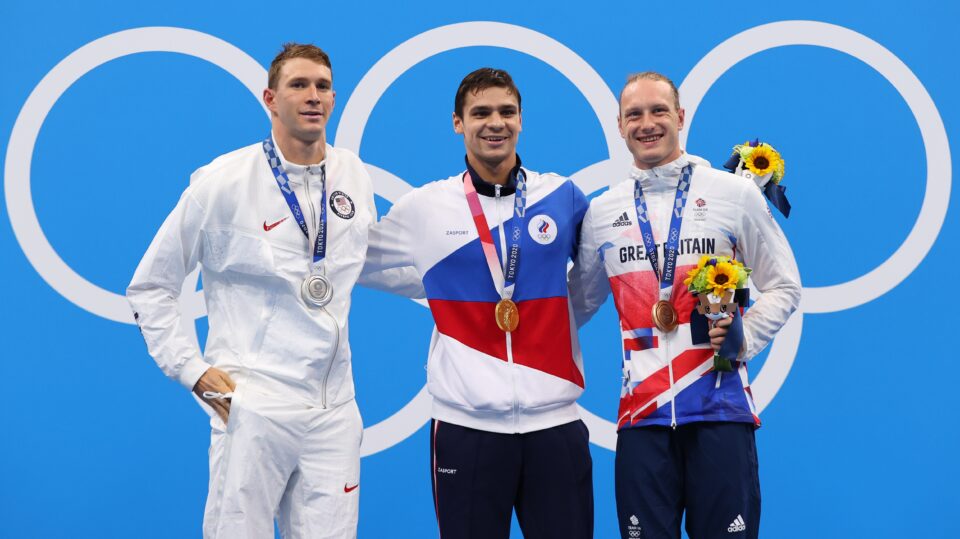 Murphy (L) won gold in the 100 and 200 Rio finals, but Rylov (C) won both titles in Tokyo. Luke Greenbank of Britain on the right picked up the bronze medal REUTERS/Marko Djurica

An American swimmer sparked controversy at the Tokyo Games on Friday when he said it would take a long time to clear his sport of doping after losing his Olympic title to a Russian.

U.S. swimmer Ryan Murphy said his 200 metre backstroke final was “probably not clean” after he lost to Evgeny Rylov, competing as part of the Russian Olympic Committee (ROC).

Murphy won gold in the 100 and 200 Rio finals, but Rylov won both titles in Tokyo.

“I’ve got 15 thoughts, 13 of them would get me into a lot of trouble,” said Murphy when asked by a reporter if he had any concerns about his races in relation to doping.

Later, Murphy said he had no intention of making an allegation against his opponent.

Rylov said Murphy was entitled to his thoughts given that there had been scandals.

The World Anti-Doping Agency handed Russia a four-year ban from top sporting events in 2019. Those sanctions were then lessened by a sports arbitration court.

More than 300 Russian athletes are competing at the Tokyo Games as part of the ROC. While they are not allowed to compete under their own flag, they can now wear their tri-colour uniforms, instead of neutral ones initially imposed by the doping agency.

The uniforms may carry the logo of the Russian Olympic Committee and the letters “ROC”, but are almost indistinguishable from Russian team uniforms of past Games.

The American’s comments did not deflect from golden performances in the pool with medals once again spread between countries other than the traditional powerhouses.

South African Tatjana Schoenmaker won the women’s 200 breaststroke in a world record time of 2:18.95 to deliver her nation’s first gold medal of the Tokyo Games.

China won their first men’s swimming gold in Tokyo with Wang Shun’s victory in the 200 medley, and Rylov won the 200 backstroke for his second gold of the week.

Schoenmaker, who had claimed silver in the 100 breaststroke on Tuesday, powered home to finish 0.97 seconds ahead of American Lilly King, with Annie Lazor of the United States in third.

The 24-year-old’s victory marked the second African gold medal in the pool following Tunisian Ahmed Hafnaoui’s success in the men’s 400 freestyle on Sunday.

Emma McKeon won the 100 freestyle for Australia’s sixth gold in the pool, holding off Hong Kong’s Siobhan Haughey down the final straight to win by 0.31 seconds.

The second silver to Haughey gave Hong Kong its most medals ever at a Games after they also won gold in the fencing.

The victories have prompted Hong Kong shopping malls to broadcast Olympic events, offering a rare occasion for people to gather with groups limited since early 2020 because of coronavirus.

Hong Kong police said they were launching an investigation into booing of China’s national anthem in a shopping mall that broadcast Cheung Ka Long’s win in the men’s individual foil.

Heavy rain and thunder across Tokyo caused minor disruptions to competition on Friday morning, including the start of the BMX racing semi-finals.

Once the course was dry, accidents marred the high-octane action in both the men’s and women’s events.

American favourite Connor Fields was taken to hospital after a horrible crash in his semi-final. He was treated by medics for several minutes before being stretchered into an ambulance.

It was the worst of several crashes, one of which also saw Australian rider Saya Sakakibara also require treatment although she was not badly hurt.

American Alise Willoughby, second in Rio and Dutchwoman Laura Smulders, were also involved in heavy crashes and failed to make the final of the women’s race.

BMX racing made its debut at the Beijing 2008 Games. The freestyle event is making its Olympic debut in Tokyo, part of the International Olympic Committee’s latest bid to attract a younger demographic through extreme sports.

The morning session in the women’s Olympic Rugby Sevens could not be completed after lightning over the Tokyo Stadium delayed the final match between New Zealand and the ROC.