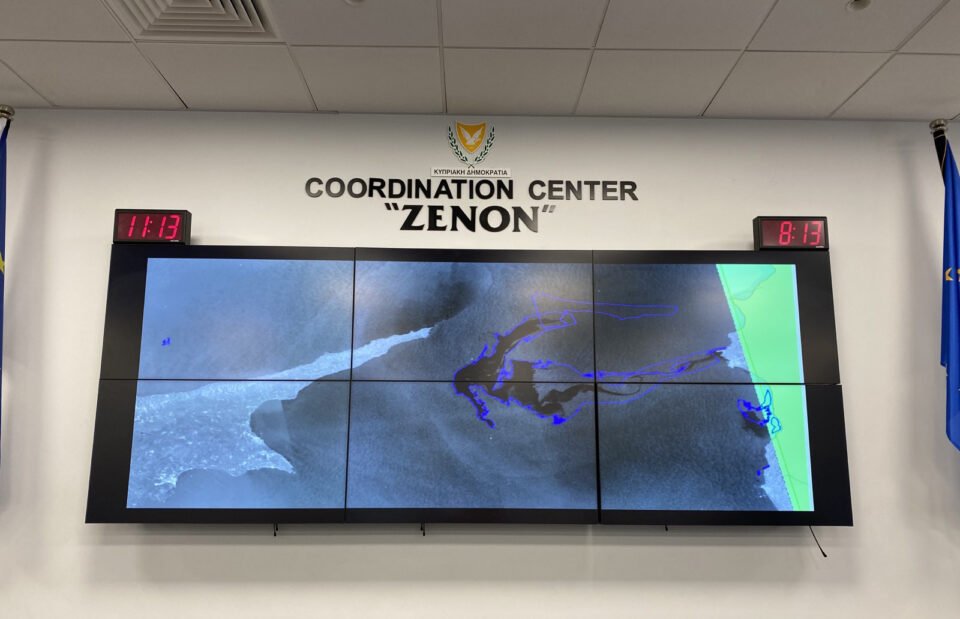 A massive oil slick which had been expected to hit Cape Apostolos Andreas in the Karpasia peninsula is now heading back to Syria, Turkish Cypriot authorities said on Tuesday.

The oil slick, a consequence of a leakage in a power plant inside a refinery in the Syrian town of Baniya on the Mediterranean coast last Monday, was said to be around 15 nautical miles off Apostolos Andreas on Tuesday afternoon.

Later in the afternoon, however, ‘prime minister’ Ersan Saner announced that the direction of the current that had been moving towards the north eastern shores of the island had changed and the that the spillage was shifting back towards Syria.

Later on Tuesday evening Michalis Loizides, Greek-Cypriot co-chair of the bicommunal technical environment committee, said he had received information from the north that the spill appeared to be drifting away from Cyprus.

Loizides told the Cyprus News Agency that he was awaiting to be provided with more information by the Turkish Cypriot side about the oil slick in terms of its substance and volume.

But the most important thing, he said, was that the spill is now moving away from Cyprus heading towards other shores.

Turkish Cypriot authorities announced earlier on Tuesday that a 400-hundred-metre barrier was installed off the Karpasia peninsula to prevent the oil slick moving towards the coast. A crisis management unit desk was formed under the ‘prime ministry undersecretary’ Huseyin Amcaoglu and consults with experts from Turkey.

Two ships dispatched from Turkey to collect the waste are expected to reach the area by Friday, while coast guard vessels and drones from the Lefkoniko base were sent to monitor the oil spill from sea and air.

Saner said the two vessels would still arrive in the area for the clean-up.

Agriculture and Environment Minister Costas Kadis said earlier the Republic had notified the Turkish Cypriot side of the oil slick and that the government stood ready to assist but received no response.

“Unfortunately, our intention and willingness to help, so far, remain unanswered, we have not received any information or any response from the authorities of the illegal regime and so we remain alert,” Kadis told the Cyprus News Agency.

He added that the government had not expected the slick to reach government-controlled areas.

In statements to the press from the “Zenon” Coordination Centre, located in Larnaca, the Director of the Department of Fisheries and Marine Research, Marina Argyrou, said that the slick appeared to be “oil sheen” rather than crude oil.

She said that sheen management is very different from crude oil, and that it evaporates either with temperature or with water movement, while in areas where it does accumulate absorbent booms can be used.

“At the moment no one can predict how long it will take to clean,” Argyrou said, adding that they will be monitoring the situation.

Kadis said that an oil recovery vessel, the Alexandria, has been made available to Cyprus by the European Maritime Safety Agency and will be deployed if needed. The vessel carries anti-pollution equipment.

Kadis said that vessels of the fisheries department were ready to start operations if the oil slick moved to the government-controlled areas but that he did not think likely.

Cyprus, he said, had also informed Greece and Israel of the incident, in the framework of their trilateral cooperation.

There has been criticism however over the delay in dealing with the oil slick. Green Party deputy leader Efi Xanthou said Cyprus should have provided help to Syria before the oil slick started threatening Cyprus’ coastline.

The north-based Cyprus Green Action Group also said the spill should have been dealt with the cooperation of all countries on the Mediterranean coast while it was still in international waters, before it hit any shore.

The Biologists Association NGO in the north raised concerns over the consequences of the oil slick on marine life in the Karpasia area, especially the baby sea turtles that continue to hatch there.