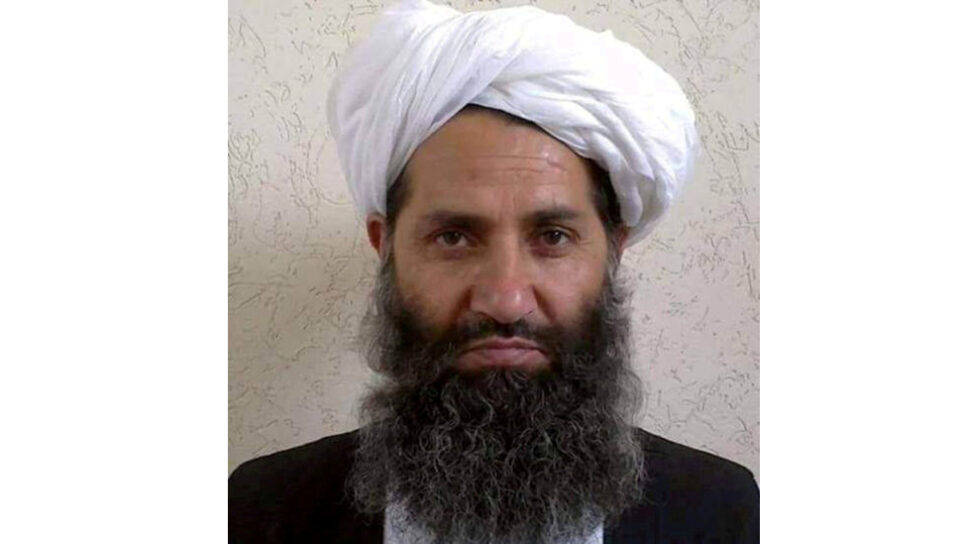 Taliban leader Mullah Haibatullah Akhundzada is seen in an undated photograph, posted on a Taliban Twitter feed on May 25, 2016

In one of the only known photographs of Taliban supreme leader Haibatullah Akhundzada, he stares directly at the camera – an expressionless face between a white turban and a long, grey beard.

As the Islamist movement unveiled its new government https://www.reuters.com/world/india/taliban-fire-air-scatter-kabul-protesters-no-reports-injuries-2021-09-07 on Tuesday after it swept to power as U.S.-led forces withdrew last month, the mysterious Akhundzada retained the role of supreme leader, the ultimate authority over the group’s political, religious, and military affairs he has held since 2016.

“We will rebuild our war-torn country,” Akhundzada said in a written statement released by the Taliban after Tuesday’s appointments, his first comments since the group retook Afghanistan.

Akhundzada said the Taliban were committed to all international laws, treaties and commitments not in conflict with Islamic law, which would henceforth regulate all governance in Afghanistan.

A hardline cleric whose son was a suicide bomber, Akhundzada has spent most of his leadership in the shadows, letting others take the lead in negotiations that ultimately saw the United States and their allies leave Afghanistan after 20 years of grinding counter-insurgency war.

Even basic details such as his age are hard to verify. He is thought to be around 60.

Yet some analysts who have studied the Taliban say he was a guiding hand, healing divisions within the movement and managing the handling over international allies and foes ahead of military victory.

“Through guile, through deception, through manipulation and through patience, he was able to bring the Taliban back to power,” said Rohan Gunaratna, professor of security studies at Singapore’s Nanyang Technological University.

Others, however, say he is more of a figurehead, picked as a compromise candidate during a time of flux in the movement, while the real power is held by the Taliban’s military factions.

“There is very little information available about him. You don’t see him saying anything in person in public. And combined with the circumstances of his appointment, that feeds into the placeholder argument,” said Rajeshwari Krishnamurthy, a South Asia security expert at the Institute Of Peace & Conflict Studies, a think tank in New Delhi.

A LOT OF FORCE

Born into a strict religious family in Afghanistan’s second largest city Kandahar, Akhundzada was an early member of the Taliban – a movement that emerged in the surrounding southern province of Helmand from the ashes of the Afghan civil war.

When the Taliban ruled between 1996-2001 with a strict interpretation of sharia law that banned women from working and imposed punishments such as stonings, Akhundzada served as the chief of its justice system, according to the United Nations.

In the wake of the U.S. invasion of Afghanistan and ouster of the Taliban after the Sept. 11 attacks, Reuters exclusively reported https://www.reuters.com/article/pakistan-taliban-quetta-haibatullah-akhu-idINKCN12A07O that Akhundzada fled to Pakistan where he taught and preached at a mosque for 15 years.

Colleagues and students at that mosque described Akhundzada as a studious disciplinarian and a fierce orator.

“He spoke with a lot of force about the U.S. and the war and that we would not give up our jihad,” one former pupil said, recalling a speech he gave at a public rally in Quetta in 2014.

Akhundzada was not the obvious selection https://www.reuters.com/article/us-afghanistan-taliban-meeting-idUSKCN0YG29L when senior members of the Taliban met in 2016 to appoint a new head after the death of leader Mullah Akhtar Mansoor in a U.S. drone strike.

While Akhundzada hailed from the large and powerful Noorzai tribe, his stock within the regime was seen as more scholarly than soldierly, unlike previous leaders.

But he was a compromise between the young and inexperienced son of late Taliban founder Mullah Mohammad Omar, and Sirajuddin Haqqani, who was wanted by the U.S. in connection with a deadly 2008 attack on a Kabul hotel, sources told Reuters at the time.

Unlike other Taliban leaders, Akhundzada is not on the U.N. sanctions list. However, his son Abdur Rahman died in carrying out a suicide bombing at an Afghan military base in Helmand in July 2017, according to a spokesman for the Taliban.

Early in his leadership, Akhundzada instituted reforms https://www.reuters.com/article/us-afghanistan-taliban-idUSKBN15B1PN that consolidated his influence over an insurgency weakened by division and defection.

But he kept a low public profile. The only photo Reuters has been able to verify of him was an undated image posted on a Taliban Twitter feed in May 2016. It was identified separately by several Taliban officials, who declined be named.

This shadowy existence has led to constant speculation about his whereabouts and health. So secretive are the Taliban about their leaders that the death of the movement’s founder Mullah Omar in 2013 was only confirmed two years later by his son.

MPs call for measures to encourage people to have more children