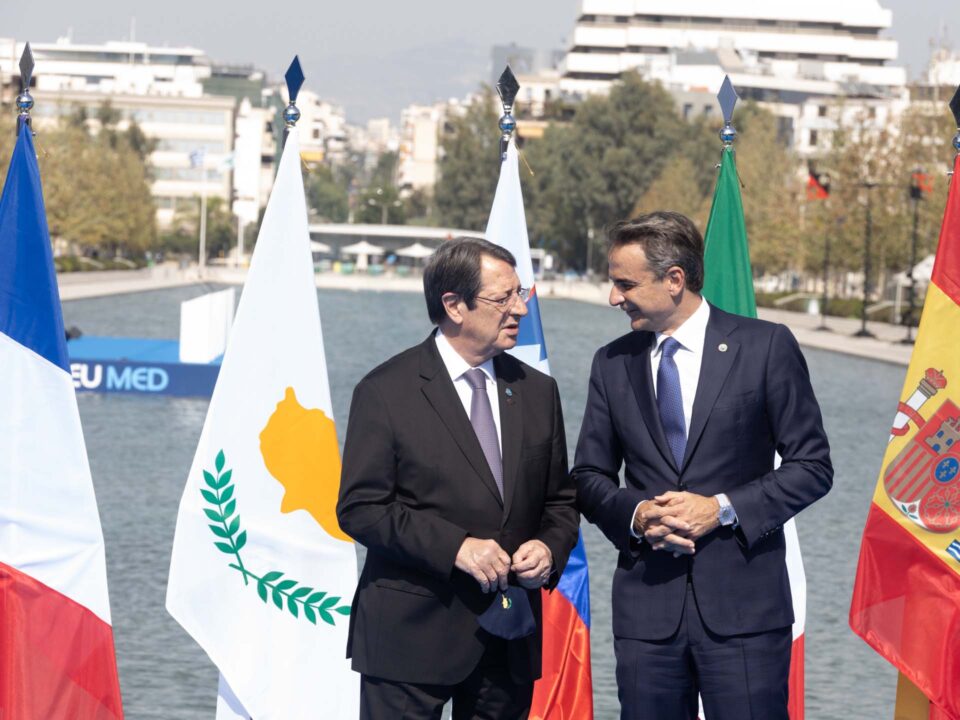 The Southern European countries group (EUMed) on Friday called on Turkey to accept Cyprus’ invitation to engage in dialogue on the delimitation of their maritime zones and reverse illegal actions in the fenced-off area of Varosha.

In a declaration after the 8th EUMed Summit held in Athens, the heads of state and government of Croatia, Cyprus, France, Greece, Italy, Malta, Portugal, Slovenia and Spain said proposals for a two-state solution were “unacceptable.”

In their references to Cyprus, they reiterated their strong commitment to a viable comprehensive settlement of the Cyprus issue based on a bicommunal, bizonal federation with political equality, as set out in the relevant UNSC Resolutions, which, they said, “are binding on all, and in line with the EU acquis, values and principles.”

The group also said efforts to resume negotiations should not be further undermined by illegal and provocative behaviour in the maritime zones and on the territory of Cyprus. They condemned Turkish illegal actions in the fenced-off area of Varosha and called for their reversal in line with the UNSC Presidential Statement of 23 July 2021 and the Declaration of the High Representative on behalf of the European Union of 27 July 2021.

They also called on Turkey accept Cyprus’ invitation to engage in dialogue on the delimitation of the maritime zones between their relevant coasts, including by submitting the issue to the International Court of Justice.

Citing European Council conclusions on Turkey’s conduct in the eastern Mediterranean, they said they were determined, if necessary, “to use the instruments and options at the disposal of the European Union to defend its interests and those of its member states as well as to uphold regional stability.”

They reiterated their readiness to engage with Turkey in a phased, proportionate and reversible manner to enhance cooperation in a number of areas of common interest, subject to the respect of conditionalities set out by the European Council last June.

Earlier, President Nicos Anastasiades briefed the leaders on the latest but also Nicosia’s initiative on a regional action plan to deal with the consequences of climate change.

He said they also discussed the migration issue that affects front-line states including Cyprus that has been receiving migrant flows mainly from Turkey.

Anastasiades also said he briefed the leaders on Turkey’s “illegal and internationally condemned actions against the Republic of Cyprus, either on land or at sea and / or the particularly unacceptable demands for a change in the basis of the solution of the Cyprus problem.”

He said that he reiterated to his colleagues “that we remain firmly committed to finding a solution that should be based on international law.”

He welcomed the leaders’ unanimous position on the matter, as per the declaration.