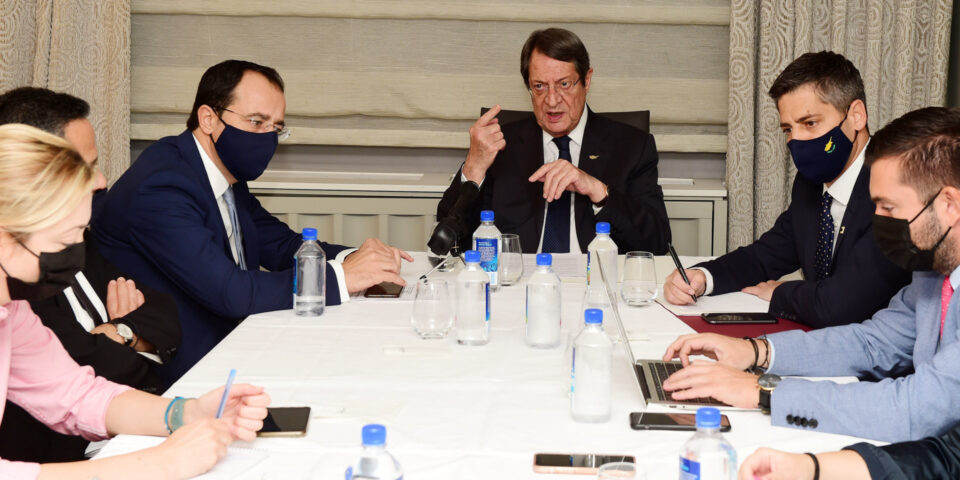 President Anastasiades at his press conference in New York on Monday

By Nick Theodoulou and Evie Andreou

President Nicos Anastasiades said on Monday he is “not as optimistic” as he would like to be regarding the upcoming informal meeting on the Cyprus problem.

He is to meet UN Secretary-General Antonio Guterres in New York on Tuesday, and said that the meeting is particularly important in light of a further proposed informal meeting on September 27 with Turkish Cypriot leader Ersin Tatar, Guterres and himself. Anastasiades is in New York for the 76th UN General Assembly which he will address on Friday.

Anastasiades emphasised that he had written to Guterres on August 30, expressing his readiness and decisiveness in meeting the secretary-general and Tatar.

The president said that such a meeting will provide the opportunity to develop his position which may help – if there is goodwill from the other side – to restart a constructive dialogue which will lead to a solution to the Cyprus problem.

Such goodwill, Anastasiades said, will make it possible to achieve results as was the case in June 2017 and November 2019.

He noted however that in the 2019 Berlin meeting, despite progress made towards the resumption of substantive talks, Ankara’s interventions cratered the process.

The president further pointed towards comments made from the Turkish and Turkish Cypriot camp – specifically, proposals for a two-state solution and recognition – as a black mark on the peace process.

“I’m not as optimistic as I would like to be in the face of repeated statements by either [Turkish President Recep] Erdogan, or [Turkish Foreign Minister Mevlut] Cavusoglu, repeated by Tatar,” the president said.

He also criticised what he argued is a ‘Neo-Ottoman’ agenda by Turkey, saying it impacts not only Cyprus but also Greece, Libya, Syria, Iraq and Armenia.

CyBC reported that during the informal, trilateral meeting with the two leaders Guterres will also announce the name of his new, proposed special representative to Cyprus to replace outgoing Elizabeth Spehar.

It has also been reported that the UN Secretary General’s special envoy for Cyprus, Jane Holl Lute, may also be leaving – to which Anastasiades replied that it appears Lute has joined the board of directors of an oil company, raising concerns that there may have been potential conflicts of interest with Cyprus and Turkey.

Anastasiades is expected to brief Guterres on his proposal for a return to the 1960 constitution made in response to the UNSG’s call for pitching new ideas to break the stalemate.

Earlier in the month, Anastasiades explained that it was not a call to return to a unitary state but rather a call to the Turkish Cypriot side to assume the positions it is entitled to based on the 1960 constitution so that a dialogue can start on territorial adjustments and other issues. Tatar has already rejected this proposal.

Anastasiades said that the decentralisation of power, which will ease frictions and reduce potential areas of conflict, is also a way out of the deadlock.

Later on Monday, Anastasiades hosted a delegation of the American Jewish Public Affairs Committee (AIPAC) where he discussed the further enhancement of the strategic relations between Cyprus and Israel.

Anastasiades also visited Ground Zero, where in a special ceremony he laid a wreath at the Monument to the Victims of the 9/11 terrorist attacks.

Greek Minister of State George Gerapetritis told Skai TV Athens did not request such a meeting. He also said the time schedules of the two leaders in New York do not coincide. Erdogan’s New York schedule ends on September 22, the day Mitsotakis is scheduled to arrive.