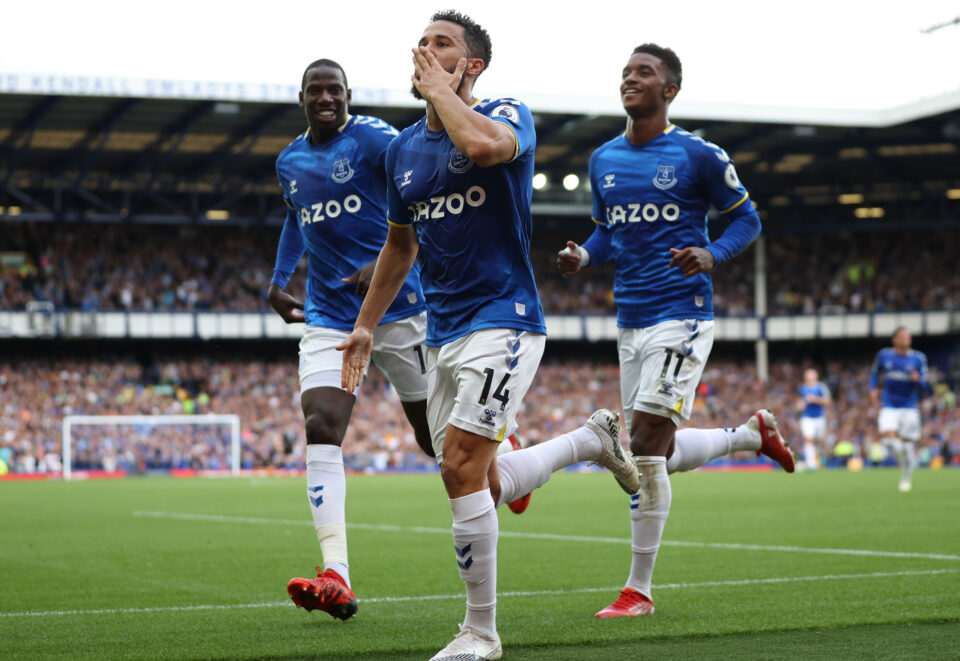 Andros Townsend and Abdoulaye Doucoure were on target as Everton condemned Norwich City to their sixth straight Premier League defeat with a comfortable 2-0 win at Goodison Park on Saturday.

A subdued first half sprung to life in the 28th minute when Norwich loanee Ozan Kabak was adjudged to have brought down Allan in the box following a lengthy VAR check and Townsend dispatched the spot-kick.

Norwich offered little going forward in the first half and their only notable attempt came from Mathias Normann, whose shot from distance was palmed away by Jordan Pickford.

The visitors were better in attack after the break, with Normann and Ben Gibson going close but Everton crushed any hopes of a comeback when Doucoure finished smartly in the 77th minute after being played in by Demarai Gray.

Everton climbed into sixth place and Norwich stayed bottom of the table.

Vardy scores at both ends in 2-2 draw with Burnley

Burnley were denied their first Premier League win of the season at Leicester City as Jamie Vardy scored an own goal before following it up with a brace in a 2-2 draw at the King Power Stadium on Saturday.

The visitors took the lead when Leicester striker Vardy attempted to clear a Burnley corner at the near post, but his glancing header beat goalkeeper Kasper Schmeichel to find the back of the net.

After missing two opportunities to score in the first half, Vardy redeemed himself with an equaliser when he ran into space to receive Youri Tielemans’ pass and beat Nick Pope with a low, angled shot that found the bottom corner.

Burnley reclaimed the lead three minutes later when Ivorian midfielder Maxwel Cornet volleyed home from a Matej Vydra cross, giving Schmeichel no chance of making a save as he dived to the right.

However, with five minutes left in the game, Vardy made the breakthrough again when he used his pace to entice Pope into no man’s land before rounding the keeper and side-footing the ball into an empty net from a narrow angle to make it 2-2.

Chris Wood nearly won it for Burnley at the end with a stoppage time goal but it was disallowed for offside. The result leaves Sean Dyche’s side in the relegation zone in 19th with two points from six games while Leicester are 12th.

Newcastle United’s wait for a first Premier League win of the season continued as Watford equalised late on to earn a 1-1 draw at Vicarage Road on Saturday.

In a lively start to the match, the visitors struck in the 23rd minute when Sean Longstaff curled a shot into the top corner from Allan Saint-Maximin’s layoff.

Longstaff wasted a glorious chance to make it 2-0 when he shot over the crossbar but Watford improved after the break.

The hosts were rewarded when Ismaila Sarr’s powerful header beat Karl Darlow in the 72nd minute.

Newcastle were hanging on for a point late on and were relieved when Josh King’s effort was ruled out for offside after a VAR intervention.

The draw left Newcastle in 17th place on three points while Watford are 11th with seven points.