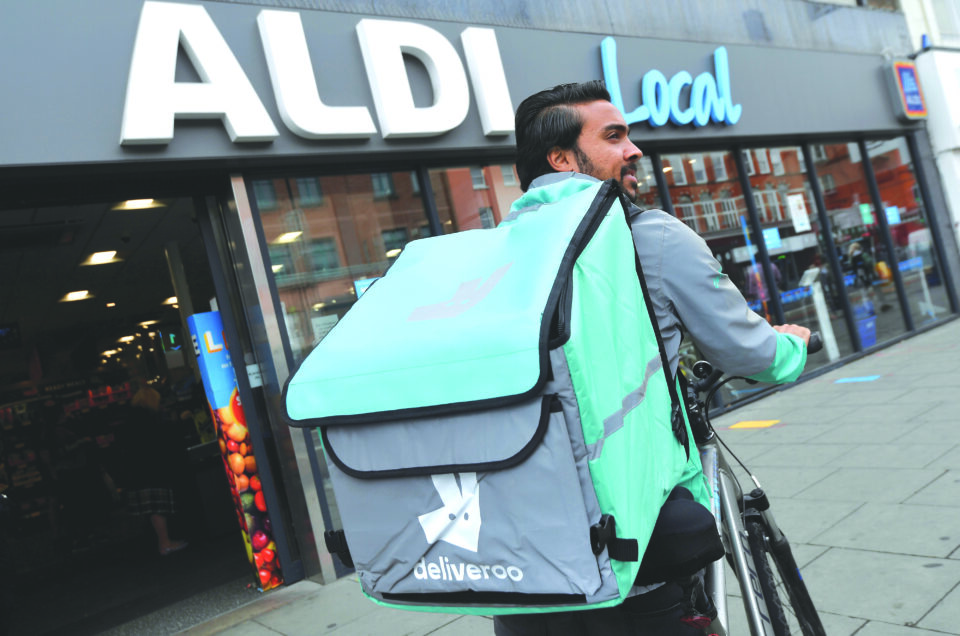 A Deliveroo delivery rider poses with a bag of Aldi groceries

German discount supermarket group Aldi will invest 1.3 billion pounds ($1.8 billion) in Britain over the next two years, opening a new store every week to try to accelerate its rapid growth in market share, it said on Monday.

The retailer plans to open another 100 new stores in Britain, expand its logistics infrastructure, including a new distribution centre in central England, and invest in technology.

It will create more than 2,000 new British jobs next year, adding to the 7,000 permanent roles created over the past two years.

“Around 88% of British consumers want to shop in stores … There’s no doubt that bricks and mortar is the focus for our business,” Giles Hurley, the CEO of Aldi’s business in Britain and Ireland, told reporters.

Aldi is now Britain’s fifth-largest supermarket group. It currently trades from 920 UK stores and has an 8% market share.

However, its share edged lower at some points during the pandemic, partly due to a lack of a significant online business.

The crisis prompted the business to accelerate its push into home delivery via a partnership with Deliveroo. It also introduced a click-and-collect service that’s now live in 200 stores, and is trialling a checkout-free concept store in Greenwich, southeast London.

Hurley said although no UK retailer could be immune from current supply chain disruption, Aldi was better placed than rivals.

Aldi’s limited product range means it has a smaller supplier base, while the majority of products it sources for its British stores come from local suppliers and manufacturers.

“That means our supply chain is just that little bit shorter and easier to control,” he said.

Hurley also noted that the majority of its drivers are directly employed.

“It’s very much business as usual. Yes things are tighter but our trucks and our deliveries are rolling across the UK, our stores are full and we’d encourage customers to shop as normal,” he said.

The CEO said nobody in the market could guarantee there would not be inflation this Christmas.

“What I am able to guarantee is that customers will always get the lowest prices in Aldi irrespective of what the future holds.”

A brief introduction to Uniglo.io (GLO), Avalanche (AVAX), and the Sandbox (SAND)