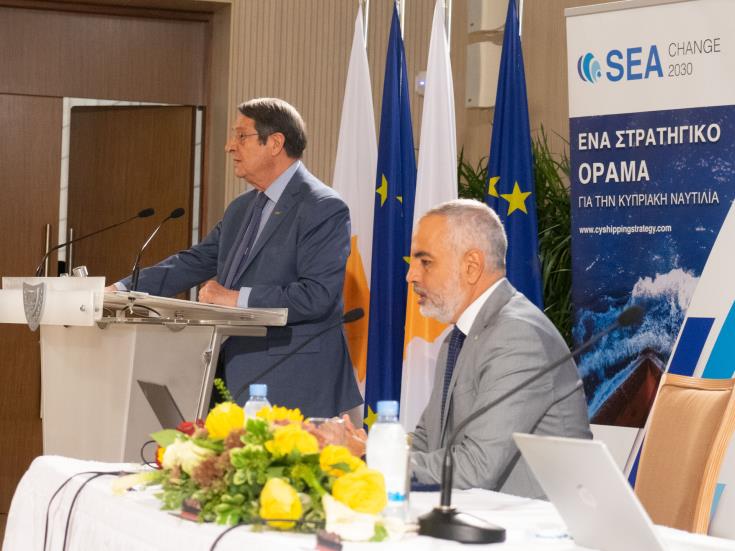 Cyprus’ connection to the sea is fundamental for both the nation and its economy, Deputy Minister of Shipping Vasilis Demetriades said on Tuesday presenting the government’s long-term shipping strategy.

“We have a proud and successful maritime history, and we are committed to ensuring this continues into the long-term future,” he added.

In terms of extroversion, Demetriades mentioned the launch of a new platform called the Cyprus Maritime Exchange.

“We want to engage in continuous brainstorming with all of you,” Demetriades told the audience listening to his presentation, which included a broad spectrum of stakeholders from the shipping industry.

“Be it the global shipping industry or the national shipping industry, on that platform you will be free to submit your views and ideas, while we will also frequently organise a lot of virtual meetings to collect information,” Demetriades explained.

Regarding the sustainability pillar, the deputy minister mentioned seven distinct actions, including the continuous monitoring of all ships on the Flag Inspection Priority List, the systematic monitoring of all recognised security organisations, as well as ensuring that all statutory fines imposed are effective and proportionate.

“Our shipowners will hear more frequently from us and we will provide guidance in order to improve our safety records,” Demetriades said.

He also mentioned the issue of maritime cybersecurity risks, which will be addressed through two actions: the creation of a framework, platform and requisite facilities to better educate stakeholders, as well as effectively addressing the challenges and risks stemming from the digital transformation of the maritime and shipping industry.

Earlier in the day President Nicos Anastasiades said that the government will continue to fully back the Cypriot shipping industry, praising its trade-boosting role.

“I have no doubt that through these powerful synergies and cooperation already developed we will effectively promote the ambitious yet realistic actions we have planned,” Anastasiades said.

The president said that this was the culmination of the continuous effort to upgrade shipping administration so that Cyprus was more competitive. The decision to create the Deputy Ministry for Shipping three years ago was taken with this objective in mind.

Cyprus was already reaping the benefits since the Cyprus-flagged commercial fleet had surpassed 25 million gross tonnes in total capacity for the first time in history, ranking eleventh worldwide and third among EU member-states, he said.

He also mentioned that Cyprus was the largest ship management centre in Europe and one of the largest in the world, while there was an upwards trend in the establishment of shipping companies on the island.

Anastasiades stated that companies registered in the Cyprus Tonnage Tax System had tripled in the past decade. There were 97 companies in 2012, 173 in 2017, and 275 at present. This led to an increase in companies that provide support services to ship management companies.

More than 9,000 people have maritime jobs on land, while more than 55,000 seafarers are employed on Cyprus-flagged ships.

Interest in shipping jobs was also on the rise, with Cypriot students in commercial shipping academies in Cyprus and Greece doubling in in the last 8 years. The number of students went from 128 in 2012 to 269 during the current academic year. The government supported this by providing scholarships and grants to the tune of €300,000 per annum.

The president said the shipping industry showed great resilience during the coronavirus pandemic, continuing to support the Cypriot economy and contributing 7 per cent of the country’s GDP. The government supported the shipping industry during the pandemic by allowing the repatriation of 25,000 seafarers and helping vaccinate 40,000 seafarers working on Cyprus-flagged ships.

“This positive performance should not allow us to become complacent, as we know very well that the shipping sector operates in an ever-changing and highly competitive environment,” Anastasiades warned.

The president said that the government’s objective is to make the shipping industry more agile, more competitive and modern, something that will be facilitated through the ‘SEA Change 2030’ plan.

He added that the strategy has been shaped by discussions between the Deputy Ministry of Shipping and local and international stakeholders in the shipping industry.

IMF revises upwards its forecasts for growth of the Cypriot economy

Coronavirus: Booster shots available for over 65s as of Wednesday