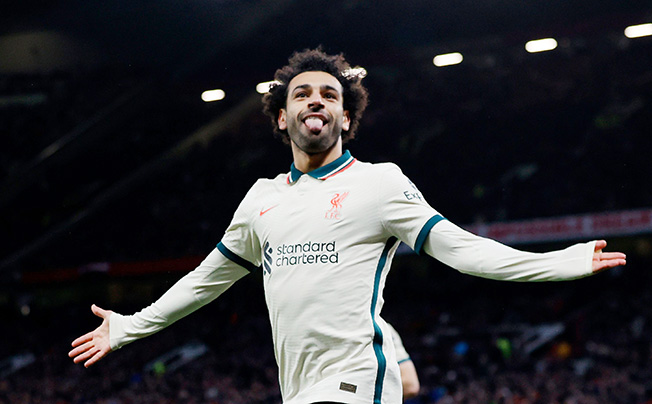 Mohamed Salah hit a hat-trick as Liverpool humiliated Manchester United, romping to a stunning 5-0 victory at Old Trafford in the Premier League on Sunday.

Naby Keita got the visitors off to the ideal start in the fifth minute and then a dreadful mix-up between Luke Shaw and Harry Maguire led to Diogo Jota turning in a low cross from Trent Alexander-Arnold to make it 2-0 after 13 minutes.

United were in disarray at the back and Salah made it 3-0 – scoring for the tenth straight game in all competitions – converting a low ball from Naby Keita and then added the fourth after being set up by Jota.

It was the first time United had been 4-0 behind at the interval in the Premier League era and they were loudly booed off the field.

It took just five minutes after the break for Salah to complete his hat-trick with a trademark clinical finish after a superb through ball from Jordan Henderson.

United’s day got worse as they had a Cristiano Ronaldo goal over-ruled for offside by VAR and then half-time substitute Paul Pogba was sent off for a two-footed tackle on Keita, 15 minutes after coming on.

West Ham United handed Tottenham Hotspur their fourth defeat in a Premier League London derby this season as Michail Antonio scored a second-half goal to earn his side a 1-0 win on Sunday.

West Ham moved provisionally up to fourth with 17 points while Spurs — who also lost to Crystal Palace, Chelsea and Arsenal — fell to sixth as Nuno Espirito Santo’s side failed to test the home side’s goal in the second half.

Antonio had been troubling Spurs’ defence throughout the game and he was rewarded for his hard work when he scored from a corner in the 72nd minute after getting the better of his marker Harry Kane.

As Aaron Cresswell’s pinpoint cross floated into the six-yard box, Antonio shrugged off Kane and stuck his foot out to score his sixth league goal of the season.

“The ball came my way and obviously being the poacher I am, I stick my foot out. I was surprised it went in because I kind of got my foot there to get in front of him,” Antonio told Sky Sports after his sixth goal against Spurs.

Leicester City secured a 2-1 win at Brentford in a pulsating Premier League game on Sunday thanks to goals from Youri Tielemans and James Maddison.

The result lifted Leicester up to ninth in the standings with 14 points, while Brentford dropped to 12th on 12 points from nine games.

Brentford were kept at bay by a combination of poor finishing and a string of saves by Leicester goalkeeper Kasper Schmeichel before being caught out on the counter-attack for Maddison’s 73rd-minute winner.

Defender Mathias Jorgensen flicked a header past Schmeichel at the hour mark to cancel out Tielemans’ unstoppable first-half strike from 25 yards, but Maddison restored Leicester’s advantage by tapping the ball into an empty net.

“We hammered a team in the first half that finished in the top five last season. They didn’t have anything apart from a moment of luck or quality,” Brentford manager Thomas Frank said after the game.

“Tielemans is very good, but he’s not even scoring that 10 out of 100 times… We deserved to win.”