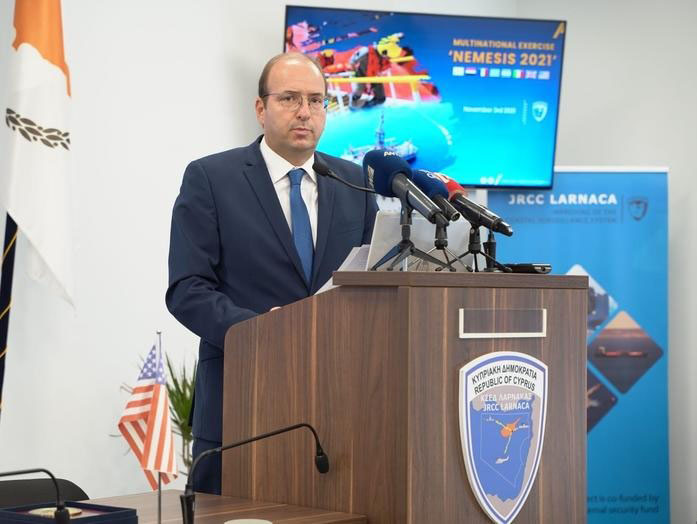 Defence Minister Charalambos Petrides on Wednesday launched the multinational search and rescue exercise Nemesis 2021 with the participation of eight countries, including Cyprus.

Speaking at the joint search and rescue coordination centre JRCC in Larnaca, Petrides said Cyprus was constantly upgrading its procedures dealing with emergency situations such as antiterrorism operations, search and rescue, and pollution of marine environment, within the island’s exclusive economic zone.

This will be the eighth consecutive Nemesis exercise, which is “based primarily on the level of cooperation and coordination among the participants”, the minister said.

“The effectiveness of all the agencies involved in the wider field of maritime safety is not a one-time goal to be achieved,” he added. Rather, this is a process to be pursued continuously.”

Petrides also referred to the issue of hydrocarbons exploration within Cyprus’ EEZ.

“We recognise that the utilisation of our exclusive economic zone comes not only with benefits but also with responsibilities, and I would like to assure you that the Republic of Cyprus is committed to adhering to them,” he said.

Petrides said that the exercise examined “crisis scenarios, emergency scenarios such as terrorist strike, fire or search and rescue within the EEZ of the Republic of Cyprus”.In her address Energy Minister Natasa Pilides said that after the pandemic, “we are now going back to business as usual to the greatest extent possible, moving forward with resumption of the exploration programme in our EEZ by the end of the year.”

She thanked all services that have successfully cooperated in the drilling programme.

“Their dedication and hard work are a big part of our common efforts to efficiently and safely monetise Cyprus’ hydrocarbon resources, especially given how important it is for the unhindered continuation of our licensees’ operations, to trust in the governmental services’ readiness to assist in any emergency,” she said.

Pilides said that drilling will resume early December and that Turkish provocations are being examined in collaboration with the foreign and defence ministries.

Invited to comment on the Turkish provocations in Cyprus’ EEZ, the minister replied that all necessary preparations are underway so that the resumption of drilling will go “smoothly and achieve positive results”.

Many people involved are already in Cyprus to make the final preparations she said.

“It is very important that we have the backing of countries, not only in the region but also countries such as France and the US.”

Sentencing on November 11 for young men guilty of bullying teen

Scientists eye beginning of an end to the Covid-19 pandemic