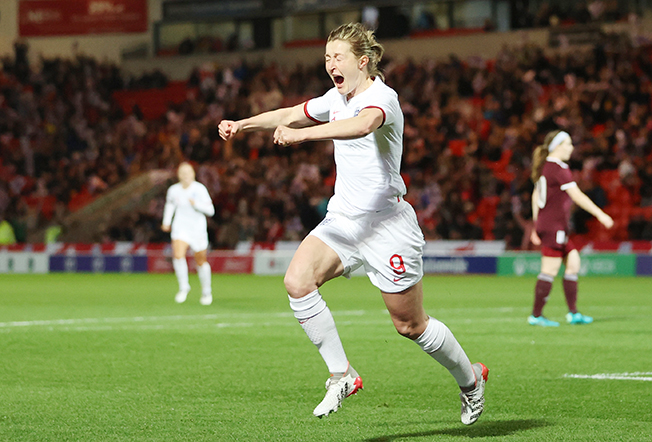 Ellen White spoke of her pride after breaking England Women’s all-time scoring record in the remarkable 20-0 victory over Latvia in Doncaster.

White scored twice early on in the World Cup qualifier at the Keepmoat Stadium to take her level with and then past Kelly Smith’s mark of 46 goals, before adding another effort shortly after the break to complete her hat-trick.

The 32-year-old forward, who was making her 101st England appearance, told a press conference after the match: “It feels very nice. I don’t know if you could see it, but it was very emotional on the pitch. I feel very proud to represent my country, to score goals.
“I think for me, it was all about the team tonight. But I feel very proud.

“I just feel really lucky to be honest, to be in this England team. The support I have from my family is amazing, I owe a lot to them, and the goals are all for them really because I just want to make them proud.

“It (the record) has been spoken about so much and I didn’t want to talk about it for a while. I feel really lucky that I can now just concentrate on the team and enjoy playing for England.”

Asked on ITV4 what she would have said if told as a schoolgirl she would one day become England’s record goalscorer, White said: “I’d say you’re having a laugh! It’s incredible. But I’m not stopping here. I still want to score goals for England.”

Harry Kane, closing in on the men’s team’s scoring record, said in a video message on England’s official Twitter feed: “Hi Ellen, I just wanted to send you congratulations on reaching the highest goalscorer for England Women – amazing achievement, fully deserved and I’m sure there’s a few more to come as well. Massive congratulations.”

Beth England notched a brace, and there were also goals from Ella Toone, Georgia Stanway, with a penalty, Jess Carter, Jill Scott and Jordan Nobbs as the Lionesses, who were 8-0 up at half-time, recorded their biggest competitive victory, surpassing a 13-0 victory over Hungary in 2005.

Boss Sarina Wiegman was asked if there was a case for a rule change so certain teams had to play pre-qualifiers, and she said: “I think we have to look at it. Of course you want competitive games, and these are not competitive games.

“I know that has the attention of UEFA and FIFA, and I think that’s good, because I don’t think a 20-0 is good for the development of anyone.”